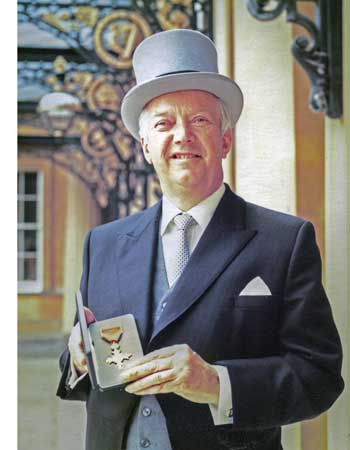 Guy C Barrett OBE, President of the British Constructional Steelwork Association (BCSA) from 1983 to 1986, has passed away at York Hospital after a short illness.

Born on 17 March 1925, Guy leaves behind three children, Elizabeth, James and Richard. His wife Mavis, died in 2015. They had been married since 1950 and lived in Horsforth, Leeds.

After leaving school, Guy studied structural engineering at Bradford Technical College and eventually became a Fellow of The Institution of Structural Engineers.

His career was however interrupted by the Second World War, and once old enough he joined the RAF as a corporal. After the War, Guy worked with the RAF installing radar at Berlin and Heathrow airports.

Guy eventually left the RAF and joined the Bradford-based family business, the steel stockholder and structural engineer, Henry Barrett and Sons. He became Managing Director and later Chairman of the business.

As well as holding the position of BCSA President, Guy was also President of the European Convention for Constructional Steelwork from 1988 to 1989.

During this time and under his leadership, the BCSA successfully hosted an International Conference and European Steel Design Awards in 1989, welcoming 1,000 visitors from 27 countries.

Guy was awarded an OBE in the Queen’s Birthday Honours in 1986, for services to the constructional steelwork sector and, his other great passion, pigeon racing.