February 3, 2015 by NSC in Projects and Features, This month's featured stories

A new town centre is being created at the former Longbridge car plant site and phase two has kicked off with the construction of the region’s largest Marks & Spencer store.

Phase two of the town centre scheme has now kicked off with the building of the West Midlands’ largest Marks & Spencer store.

The steel-framed 13,900m² store will anchor this phase of the development, which also includes a multi-storey car park and a further 4,100m² of smaller retail units all of which are being built with steel frames.

Senior development surveyor at St. Modwen, Mike Murray, says: “This flagship store is indicative of the growing confidence retailers place in the regeneration at Longbridge. Since last year, around 26,000 shoppers have visited the town centre each week, showing the potential the area has as a retail destination.

“Attracting international retailers such as Marks & Spencer is a key part of our overall aim to create business and employment opportunities in the area. Up to 350 jobs will be generated by the new store, and a further 150 will be created in the construction process.”

The Marks & Spencer store is the centrepiece of Phase Two

Regional manager at Marks & Spencer, Julie Ridley, adds: “This is a major investment for Marks & Spencer and our long term lease shows our commitment to the area and the Longbridge regeneration project. We are already excited about welcoming shoppers to the store.” 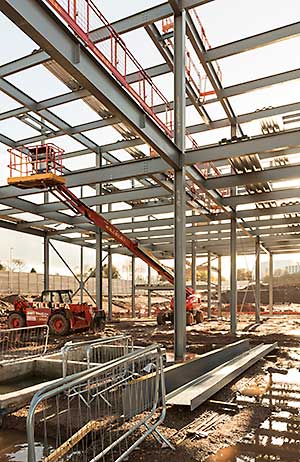 The main reason for choosing steel was speed of construction 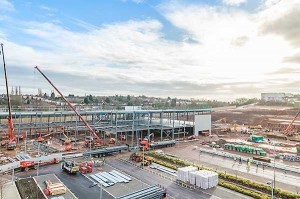 “Speed of construction is very important for this project as the M&S store needs to be open in time for this coming Christmas,” explains St. Modwen construction manager, Mark Batchelor. “Steel construction was the only solution for this tight schedule.”

Mark Watkins, senior development surveyor at St. Modwen, agrees: “We’re extremely pleased to see the M&S steelwork going up so quickly. It is a visual reminder that Longbridge is an exciting retail destination.”

The Marks & Spencer store is a two-storey steel braced frame based around a regular 9m × 9m grid pattern. Bracing is located around the roof’s perimeter and along exterior walls in areas without glazing.

James Killelea is erecting the steelwork for the entire programme using two mobile cranes. For the M&S store this allowed the company to progress the erection sequence along two fronts at the same time.

One section of the store’s roof accommodates an outdoor plant area that is shielded by an acoustic steel barrier. Designed to keep any potential noise away from neighbouring properties, the barrier is formed by a series of 2m-high column extensions spliced onto the main perimeter members.

The six level multi-storey car park will have 1,200 spaces and although it is structurally independent, it will have pedestrian links into the M&S store at both retail floors.

The car park’s steel frame is based around a 15m × 7.5m grid pattern with cross bracing positioned in some internal bays and along the perimeter elevations.

“On one elevation a steel ramp has been erected to serve the multi-storey car park and this was much easier to construct with steel as the members were curved and bent offsite which helped with a speedier construction,” explains Rodgers Leask project engineer, Kully Toor.

The final piece in phase two’s steel erection programme is the 450t for the smaller retail units. The shops are divided into two adjacent blocks, containing four and five units respectively, that both face onto a 500 space outdoor car park.

Each of the units is 15m wide × 35m deep with columns located within the unit’s partition walls.

“All of the units have been designed with larger steel members than necessary which will allow a mezzanine level to be added in the future if the tenants require it,” explains Mr Toor. “This ability to future proof the shop’s design is another advantage of using steel.”

The Marks & Spencer store along with the majority of the multi-storey car park will be open in December, with the smaller retail units scheduled for a January 2016 completion.

The overall Longbridge regeneration project covers an area of 450 acres in south Birmingham. The site was formerly one of the largest car manufacturing plants in the world producing such famous marques as Austin and MG Rover. St. Modwen, one of the UK’s leading regeneration specialists, acquired the land in 2003 from MG Rover. The car manufacturer’s new Chinese owners then leased back 60 acres of the site where the new MG3 and MG6 are being assembled.

Explaining the store’s design, Rodger Leask project engineer Kully Toor says: “There is undercroft car parking combined with the need for larger spans for the retail area above. Steel was the only material that could provide these requirements.”

The town centre phase one also included smaller steel-framed retail units and offices, while a steel podium supports a hotel.