Posted on January 1, 2009 by NSC3 in News, Projects and Features 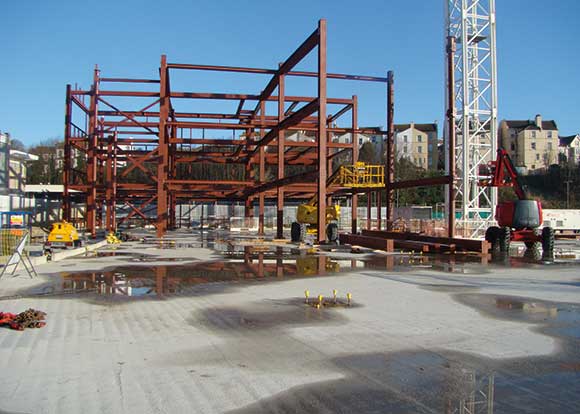 Strong coastal winds and an innovative flooring system all contributed to the need for bespoke steelwork connections at a college project in Hastings.

The educational sector has been buoyant of late, with new schools, university buildings and colleges all being built across the UK. One of the largest on- going projects in the south of England is the work being undertaken at Hastings, which will provide two new state-of-the-art college buildings for the Sussex Coast College.

The major part of this project is situated adjacent to the town’s railway station and known as Station Plaza. Here main contractor Laing O’Rourke is constructing a six-storey steel framed college building which will provide 20,000m2 of new learning space. 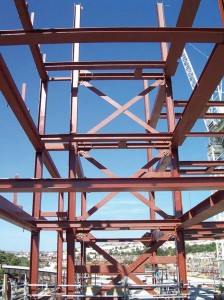 Bracing is located in steel cores.

Formerly the site was occupied by the railway station’s old car park and prior to steelwork
erection beginning in March 2008 a large earthmoving operation was required to excavate the underground car park and podium.

The steel framed college building occupies approximately just over half of the podium’s footprint and steel is mostly based around a 7m x 8m grid pattern. The structure’s entrance area is predominantly a curved facade, constructed with deep curved steel box sections, while the other three elevations are straight. The entire building wraps around an inner atrium which is glazed at roof level.

“We’ve had to sequence the steelwork with the concrete,” explains Paul Westbrook, Erections Manager for steelwork contractor Graham Wood Structural. “We have four elevations and each one was a phase. We erected one phase up to third level and then moved onto the next, while the concreting team worked on the previous phase.”

Graham Wood Structural completed four phases and then returned to phase one to erect steelwork from third floor up to roof level. This allowed the sequence to start over again with the concreting team again following on behind.

The reasoning behind this sequencing was the installation of the project’s 8m long concrete planks. “They are too long to be lifted through six floors of steelwork,” says Mr Westbrook.

The concrete planks in question are Tarmac’s TermoDeck and they had an important bearing on the steelwork design. TermoDeck planks are a fan assisted heating, cooling and ventilating system. They use the high thermal mass of structural, hollowcore slabs to warm or cool fresh air before it is distributed into room spaces of the building. 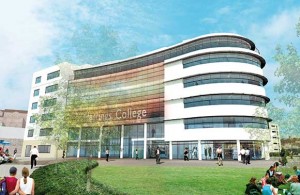 The college will transform the area around Hastings Railway Station.

Controlled by the building’s management system, a supply of air passes through holes in the slab very slowly, giving plenty of time for passive heat exchange between the air and the slabs. To accommodate these innovative and high efficiency planks, shallow but heavy beams were required.

“We had to keep the floor void slim while the concrete planks sat at the same level as the steel beams, instead of on top of them as would normally be the case,” says Steve Forder, Project Engineer for Gifford. “Structurally we had to form a flat soffit so the planks could be dropped into place.”

The building’s services will actually run along the top of the planks within the structural void. To allow this the design specified shallow, but heavier sections than normal. Gifford provided all the relevant loadings for these beams to Graham Wood and this then allowed them to design bespoke connections.

“As well as the connections we also designed the beams to have a plate welded to the bottom flange which the planks then sit on,” explains Chris Barnfather, Graham Wood’s Chief Engineer. “The majority of floor beams also had pre-drilled holes for the plank’s rebars.”

Hastings is a coastal town and constructing close to the sea brings with it a whole set of unique challenges, not least the wind. The new college building is not only a stone’s throw from the seafront, but also in a valley which exposes the structure to winds from two directions.

“Wind loadings played a critical role in the steel design of the building,” says Mr Forder. “Because of the site’s exposed location there are potentially  some big uplifts on the trusses which span the atrium.” 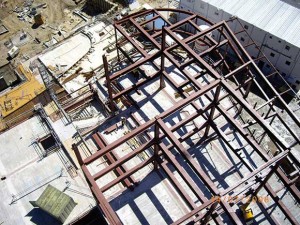 Shallow heavy beams were required to facilitate the installation of the long TermoDeck planks.

There are four trusses spanning the structure’s central atrium; because the building and atrium are slightly tapered, the longest truss is 21m while the shortest at the opposite end is 16m long. Each roof truss weighs 2.5t and is 2m deep. “They were all brought to site in one piece and lifted into position by tower crane,” explains Mr Westbrook.

Stability for the structure is provided by braced bays, which are located within stairwell and lift shafts. The design team were faced with the  problem of limited locations for putting the bracing, and as the majority of the elevations have windows at regular spacings, the ideal place was within the steel cores.

Summing up the project, Sue Middlehurst, Principal of Hastings College, adds: “With academic and vocational facilities for 2,500 students, our new college buildings will help transform further education in the area. This iconic and inspirational building will also help to mark us out as a leading provider of post-16 education.”

The college is expected to open by the end of 2009.