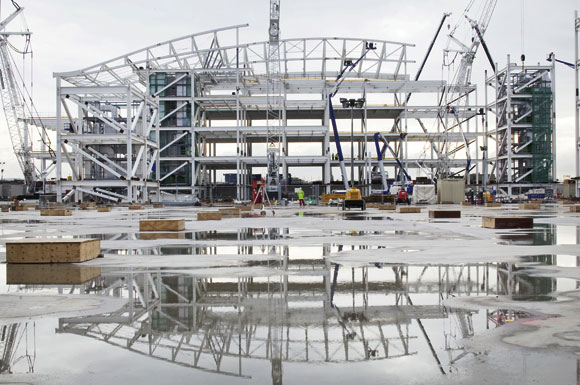 Using 12 cores for stability, the steel frame is based around a 9m x 18m grid

Passengers using any of Heathrow Airport’s terminals cannot have failed to notice the large construction project on the site of the old Terminal 2 building. Here in the middle of one of the world’s busiest airports, a new £2.2 billion Terminal 2 is under construction, a facility which will become the new home for Star Alliance airlines, handling an estimated 20m passengers annually.

Importantly, no matter how many travellers notice the work, the intention is that none will be inconvenienced by the construction of this brand new terminal building. Every effort is being taken by the construction team to ensure the job in no way affects the operations of the UK’s largest airport.

Some of the measures undertaken have included the timing of deliveries, so they do not clash with peak traffic hours through the road tunnel that not only serves the site but also Terminals 1 and 3. Also, to avoid any interference to the airport’s radar system, all of the cranes being used on site are limited to a maximum lifting height of 45m. There is an array of cranes currently being used, with 80t and 100t capacity mobiles lifting the main beam and column frame into place and 140t and 160t capacity crawlers lifting the roof trusses. 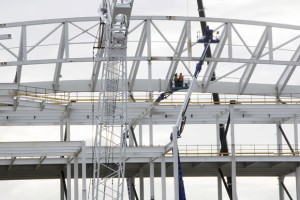 Vierendeel roof trusses are brought to site in 18m-long sections 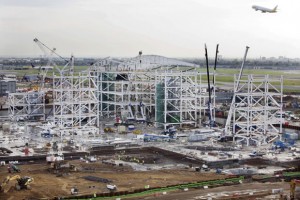 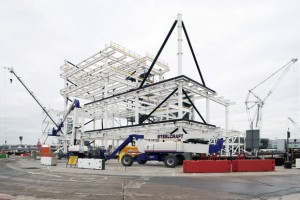 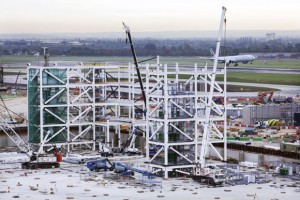 An array of cranes are being used, all of which are limited to a 45m high lifting restriction 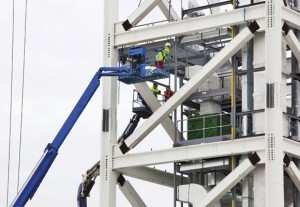 The completed new Terminal 2 will feature 180,000m² of floor space spread over three levels. The uppermost level will house departures and this floor is a double height space that will house intermediate mezzanines.

Undoubtedly a large structure with an approximate footprint of 180m × 230m, the new Terminal 2 will however produce much less carbon than the buildings it has replaced (the old Terminal 2 building and Queens Building).

Large north-facing windows in the roof will allow natural light to flood the interior, reducing the need for artificial lighting without generating high levels of heat in the building. Solar gathering panels on the roof will further reduce dependency on energy supplies.

The roof which plays such an integral role in the structure’s environmentally friendly credentials is formed with a series of steel trusses. These important steel elements are gradually being erected in phases along with the structure’s main steel frame.

Steelwork contractor Watson Steel Structures will complete the Terminal 2 main frame this August, having started on site last August. Following on behind the groundworks contractor – who is preparing the concrete slab and podium, which accommodates a basement level – the steelwork erection programme is based around 12 cores.

The steel cores, formed from six columns to create two voids, are distributed evenly throughout the structure. They house staircases and M&E equipment, but also importantly they also provide the main steelwork with its stability. To keep the cores rigid 400mm x 400mm cross bracing link the steel columns together.

The steel cores are erected sequentially, and once complete an area of main frame and roof steelwork is then able to be erected around and over it. Steelwork ties into the cores, gaining stability, although temporary bracing is also needed in each area while the erection process is on-going. This temporary steelwork is then removed as each phase is completed and the steelwork has been tied into a core.

“For ease of programme the M&E contractor is able to install its plant equipment inside of each completed core prior to the main steelwork beginning,” explains Watson Steel Structures’ Project Director Tony Whitten. “In this way they can lift their heavy plant into the cores without having to negotiate 34m-high steelwork.”

All of the steelwork is based around a regular grid of 9m × 18m, with these column spacings remaining constant throughout the building. Columns are brought to site in 18m lengths, with two members welded together onsite to form the structure’s full height 34m high sections.

At roof level a series of Vierendeel trusses span east to west across the 18m wide void,

while secondary trusses span in a north south direction.

The Vierendeel trusses are made from fabricated box sections and brought to site in completed 18m long sections. As the roof of the terminal is wave-like with three hillocks and two valleys, the trusses vary in depth – up 5m deep maximum – to form the desired curvature.

The interconnecting secondary trusses are all one metre deep, but again are brought to site in 18m lengths, and span over two 9m bays.

“We have limited all steelwork to site to under 18m-long loads as longer lengths would entail out-of-hours deliveries through the airport tunnel,” explains Mr Whitten. “The 18m figure also fits exactly with the structure’s grid pattern.”

The Vierendeels are made from fabricated box sections, apart from some of the vertical members which will remain exposed in the completed building. These steel members will support the environmentally important glazing for the north facing roof lights, so aesthetically pleasing CHS columns are used in these areas.

At the front of the terminal the roof steelwork extends out beyond the structure by a further 36m wide grid to form a canopy over the forecourt. The columns for this section of roof will remain fully exposed and again CHS members will be utilised as architectural features.

As part of the main steel programme, Steelcraft – Watson’s specialist steel erection sister company – are also managing the installation of 130,000m² of metal decking. Once the terminal building structure has been completed, the company will also erect a total of six fixed links and nodes to the building, a steel framed baggage link to the adjacent Terminal 1 and a cooling station. 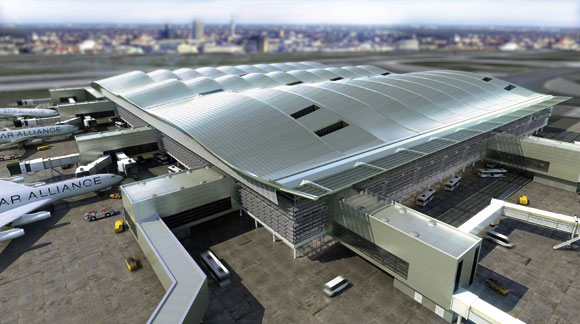