20 Years Ago: Steel for Stansted 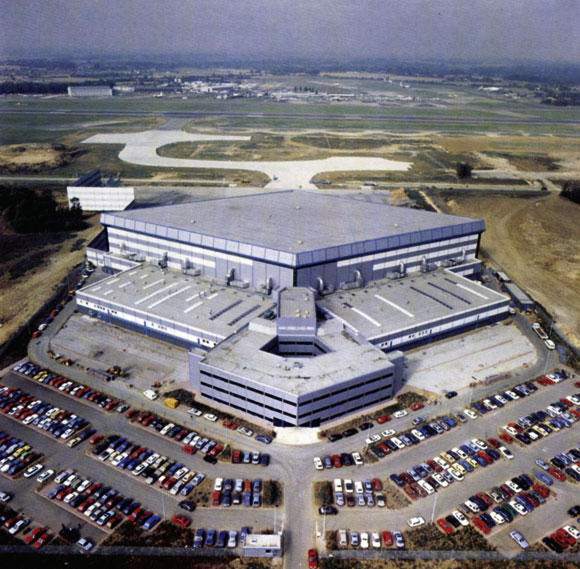 In 1991 Stansted’s new passenger terminal building will be opened and the airport will become recognised as London’s third major international gateway. The first phase in a development programme that will eventually enable the airport to handle 15 million passengers a year – compared with 1.3 million now – will have been completed. Designed by Foster Associates, the terminal is 180 metres square and formed of a structure comprising 36 steel ‘trees’ supporting 121 roof canopies. All the passenger facilities are on a single top floor, minimising the distances that traveller will have to walk – it will only be 150 metres from the building’s forecourt to the final departure lounge.

Passage though the terminal will be simple and easy, via check-in, security and immigration desks, to the departure lounge, from where a driverless shuttle train will carry up to 1,500 passengers an hour to a remote satellite building with rotundas and retractable ‘air jetties’ serving a total of nine aircraft parking stands.

Initially there will be one satellite but work on a second one will begin soon. There is provision for two more in BAA plc’s long term plans.

The satellites will be attached to the rotundas by covered ‘bridge links’, fabricated and erected by Nusteel Structures Ltd to two contracts with a total value of £5 million. The first of these contracts, for nine bridges and associated staircases for Satellite One, will be completed this year. Work on the second contract, for Satellite Two’s eight bridges and staircases will begin next year, for delivery in 1992.

The bridges for Satellite One range in length from 24m to more than 50m. Eight of them are horizontal in plan and cranked in elevation, the ninth (and, at 55m, the longest) being cranked in plan and horizontal in elevation. All nine are top tied box girders, fabricated from a composite of Vierendeel and Warren braced girders whose principal members are formed from rectangular hollow sections manufactured in Grade 43C steel by British Steel Tubes.

The structural steelwork will in fact be completely concealed, since the bridges are to be fully clad, internally and externally. All the principal components will be fully welded, with the exception of the cladding rails, which will be bolted into place to enable close tolerances to be met when the cladding is installed.

The bridges are designed to a 2400mm x 2400mm module, the internal wall and ceiling cladding consisting of 1200mm ‘cassette’ panels formed from pre-galvanised steel sheeting with a white powder-coated finish. The panels have overlapping joints with gasket seals and recessed skirtings of stainless steel. Rockwool insulation on the rear faces of the panels and a 150mm air gap between the panels and the bridges’ interior skin will ensure efficient thermal insulation at all times of the year.

The handrails are also stainless steel and will be secured to the cladding rails by brackets placed in the centres of the panels.

The floors will be carpeted over marine plywood decking. This will be supported on longitudinal rolled steel joists and conceals a services void for cable trays containing circuits for the telephone, public address and alarm systems. A continuous run of access panels to the voids will be built into the floors.

The ceiling panels will also conceal a services void and be secured to steel pressings that on one side of the bridges, will also house continuous fluorescent strip lights. Natural light will be admitted via double glazed windows on the south faces of the faces protruding from the west side of the satellite and from the north faces of the east-side bridges. The windows will have outer panes of wired Georgian glass and be secured to posts placed at 2.4cm centres, and to the uppermost longitudinal members of the Vierendeel trusses from which the glazed sides of the bridges are constructed.

From the glazed sides of the bridges, twin-flight cranked staircases will lead down to apron level, for passengers boarding or embarking from aircraft that do not use the ‘air bridges’ . All the staircases will have steel clad emergency doors.

Externally, the bridges will be clad with interlocking, gasket-sealed sandwich panels containing 50mm of Rockwool. The architects insisted on a flush exterior skin and this will be achieved by the use of concealed clips to fix the panels to the cladding rails that serve the internal panels. The external panels will have an aluminium-coloured PVF2 finish.

The bridges will be fixed to the floor beams of the satellite building; each one will have an intermediate support consisting of an universal column with cross arms fabricated from steel plate. The attention to design detail that is evident elsewhere in the bridges will also be seen in the columns: these too will be clad with ‘cassette’ panels, placed between the flanges of the columns and concealing voids housing power and communications circuits.