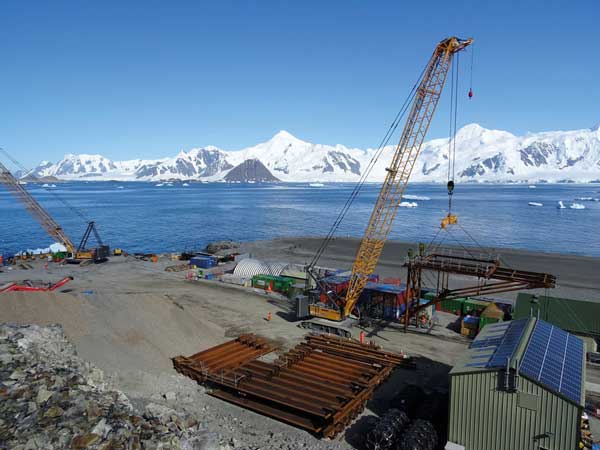 Modernisation work on the British Antarctic Survey’s (BAS) Rothera Research Station has begun its second ‘summer season’ with the arrival of the project team that will complete a 74m-long steel-framed replacement wharf.

Over the next couple months, the final 14 of the 20 steel frames that form the wharf’s skeleton will be installed and backfilled with rock. Working on behalf of main contractor BAM, Hampshire-based Four-Tees Engineers has fabricated and is helping to erect the project’s steelwork.

BAS said the new wharf will improve operational efficiency and ensure that the Rothera base is fit for the future, as well as offering a berth for the new research ship RRS Sir David Attenborough.

The new wharf will include a crane for easier launching of small science boats, a personnel gangway and a floating pontoon for the deployment of scientific instruments.

A key feature of the overall modernisation programme is to reduce fossil fuel consumption at the station and to introduce more energy efficient systems including heat recovery generators, photovoltaic solar panels and enhanced insulation.

Work has also begun on the preparations for a new 2,700m² science and operations building.

David Seaton, Senior Infrastructure Programme Manager at BAS said: “After many months of planning we are looking forward to achieving two key milestones at Rothera. These two projects; the wharf and modernisation are critical to reducing operating costs, improving efficiency and to keep the research station meeting the needs of BAS personnel to facilitate world-leading research for the future”.