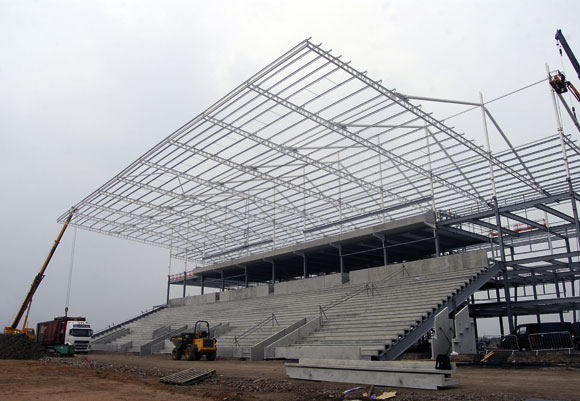 The main stand is the first structure to take shape

The City of Salford Community Stadium is set to be a leading venue in Greater Manchester and will provide a new facility for all the local communities to use as well as providing the new home for Salford Reds Rugby League Club.

A 45 acre plot of derelict land, adjacent to the Manchester Ship Canal and the M60 motorway, is being brought back to life as a new community stadium takes shape, a structure which is expected to be a leading sport and events venue for the region.As well as a modern new home for Rugby League side Salford Reds, the stadium will boast 1,000m² of modern conferencing facilities and a large banqueting suite able to cater for up to 750 people. The development also includes parking for 600 cars, two community outdoor pitches – one grass and one artificial – and community changing rooms for these pitches, housed within one of the stadium’s four stands.

Flexibility and future expansion have played a key role in the design of the stadium. Initially the ground will have a capacity of 12,000, which consists of standing terraces behind each end (north and south) and two all-seater stands. However, the stadium has been built in such a way that it can be enlarged in the future to accommodate crowds of up to 20,000.

As with many modern stadiums, steel is playing an important role in the construction of the project’s four structurally independent stands. Steel rakers support precast concrete planks for the terracing and seating areas, while long span cellular beams form the cantilever roofs. For the main stand (West), a traditional beam and column layout has been used, with long span beams creating the large open grid for the banqueting and function areas. 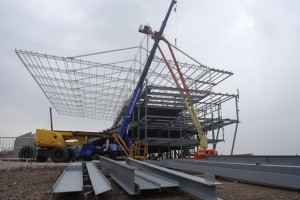 The site had been underused for many years and most recently it had been used as a tip for building waste. The phase one remediation works were carried out by Buckingham, and this commenced last May. This required the company to flatten the uneven ground and form a plateau with none of the inert waste leaving the site.

The construction programme then began in December and prior to the steelwork erection beginning in January much of the piling work had already been completed.

“As the site is predominantly made ground, the conditions change quite radically,” explains Brett Kanjurs, Buckingham’s Agent. “The west and south stands have piled foundations – down to 14m, while the north and east stands are founded on a ground bearing slab.”

Working on a design and build contract for the project’s steelwork, Barrett Steel Buildings is programmed to complete its work in 12 weeks. Starting in early March, the west or main stand was the first structure to be erected.

The largest of the four structurally independent stands, the West Stand features four levels. Ground floor will house team changing rooms, offices and circulation areas with concessions. First floor, is similar to a mezzanine level with no access to the stand’s seating areas above, but stairs allow access from the ground floor. This level will accommodate shops and offices for Salford Reds RFC.

Second floor is the Stadium’s ‘dine and view’ area, a hospitality suite with a capacity for 750 people. This floor can either be hired as one large open plan area, or divided into individual boxes with the aid of sliding partitions. The uppermost third level accommodates 12 hospitality boxes, two of which can be combined into one, again via a sliding partition.

“Steelwork for the entire main stand is based around a regular gird pattern of 7.3m,” says Chris Heptonstall, Associate Director (Design) for Barrett Steel Buildings. “We were then able to work around this grid pattern as it suited the upper level’s function areas and boxes as the column lines fall within the partition walls. For the upper level of the Stand, the grid pattern allows two executive boxes per 7.3m grid.” 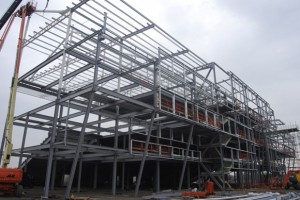 The only exception to the regular grid is the third level, where two rows of internal columns have been omitted for the hospitality suite. Long span Westok beams support this level, as these members provided the most economical solution as well as offering the added benefit of also having service holes.

As the Stadium is also expected to host concerts as well as sporting events, vibration had to be taken into account. “Both vertical and horizontal frequencies differ for various events and more design consideration had to be taken with this Stand using the Green Book,’ adds Mr Heptonstall.

Topping the West Stand is a 39m deep roof, 27m of which is cantilevering. The roof is formed from three separate 13m long Westok cellular beams, each member lifted into place with the aid of two mobile cranes, one used for lifting the beams, and the other utilised to hold the other connected members in place.

All of the stands, except the West Stand, have been designed with the possibility of expansion in mind. The three smaller stands’ roofs can be removed and more terracing can then be added behind the existing structure.

‘The three smaller stands are all of a simpler design, consisting of two rows of columns with the front row supporting the rakers which in turn support the precast terrace units,” explains Mr Heptonstall. “With minimal work, the roofs can then be refitted, with the necessary extensions added.”

The City of Salford Community Stadium is scheduled for completion by the end of the year and the first Rugby League match will take place in early 2012. 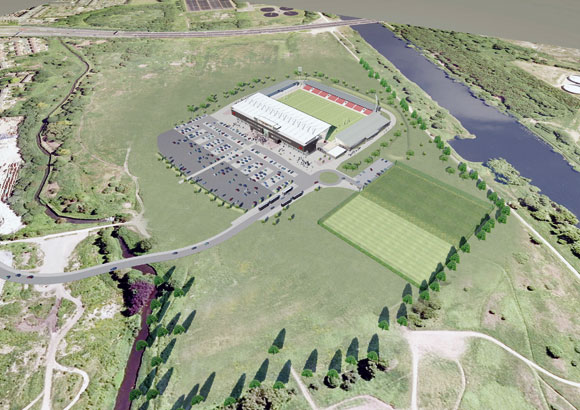