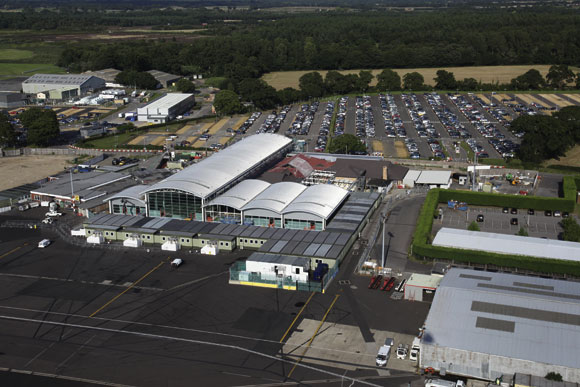 After nearly four years Bournemouth Airport’s redevelopment programme has been completed, with much of the work having taken place behind the scenes while passengers came and went as usual.

Completing a major project, which included a new arrivals hall and a new departures building, while not interfering with the airport’s day-to-day business, has been a unique challenge for main contractor Warings.

Andy Matthews, Project Manager for Warings, says the biggest obstacle which had to be overcome was coordinating construction around an operational airport. “We built around the existing departures terminal while demolishing parts of it, in order to build the new departures hall.

Collaboration between the contractor and client was important, because the airport wanted the programme delivered as quickly as possible. Warings initially planned the building of  the new structures would be delivered in phases. This phased programme would have allowed the team to gradually work around the project and demolish sections as they went along.

“The airport wanted us to develop the whole thing in one go, rather than in stages. They wanted to make sure that the departures area was fully operational by May last year and then the arrivals hall was ready for May this year,” explains Mr Matthews.

Covered passageways for passengers, running across the site, also had to be installed, to link the check-in areas with the temporary departure gates. These tunnel-like structures had to be worked around and had to be secure enough to prevent any outside intrusion for security reasons.

Steelwork played an integral role in this part of the project’s quick delivery. “Both the departures and arrivals halls lent themselves to being steel framed buildings,” adds Mr Matthews. “The client wanted open plan flexible spaces and we needed them to be erected quickly, which is what we both got from our steelwork contractors.”

The 6,000m² departures building consists of five interconnected halls, all topped with barrel vaulted roofs. The four smaller halls feature 13m spans, while the slightly taller central hall has a 19m span. This larger hall is a double height space containing a mezzanine level and a first floor plant area. 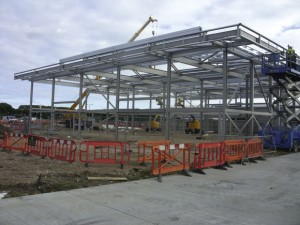 Steelwork contractor for the departures building was H Young Structures and it erected the structure around a regular 6.5m grid pattern, using columns with connecting 21m long triangulated bowstring tubular trusses to form the roof.

The taller hall is also longer than the other halls, six x 6.5m grids longer in fact. This takes into account the departure building’s L-shaped configuration, as it wraps around the portion of the existing terminal that was not demolished.

Stability is derived from bracing, inserted into each of the hall’s bays. However, the larger hall – the only part of the new build to actually form part of the airside frontage – had to be designed for potential bomb blasts.

“After careful analysis we decided that the first five bays of the longer span hall had to have bigger steel sections with larger connections,” says Darren Piper, Graham Garner and Partners Project Engineer.

The departures area was completed and opened last year, which allowed Warings to turn its attention to the new arrivals building.

“This part of the project was slightly easier as it was all done landside, but we still had to demolish the old arrivals hall, once the new building was operational,” Mr Matthews adds.

The 2,000m² arrivals building is a three span portal frame with a six degree pitched roof. This is a standalone structure which will eventually be linked to the departures hall via landside glazed walkway.

Snashall Steel Fabrications erected the 140t of structural steelwork for the arrivals area earlier this year. Using one 50t mobile crane, the company installed the steelwork around a regular 6.5m grid pattern, using a combination of columns and rafters to erect the braced spans.

The arrivals building is 7.5m high and contains two 9.5m wide spans, and one 12.5m span. As the building is a double height structure, the middle span easily accommodates a mezzanine level.

The structural design of the arrivals hall takes advantage of the building’s orientation to make maximum possible use of solar gain, solar shading and natural ventilation. Part of the reason for these features is Bournemouth Airport’s provisional target to be carbon neutral by 2015. This is being delivered through a combination of the aforementioned features and photovoltaic panels and underfloor heating, all of which will reduce the need for mechanical and electrical installations which, in turn, will lessen the building’s energy requirements.

Commenting on this major redevelopment project, Bournemouth Airport’s Managing Director, Rob Goldsmith, says: “It’s wonderful to see the airport of the future starting to take shape. Although the recession is going to have an affect on passenger numbers this year, it’s a great sign of confidence that our owners are looking to the future and developing the airport.” 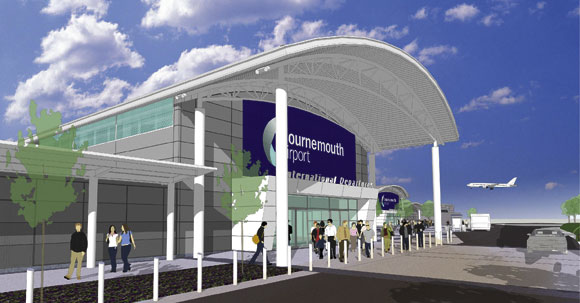