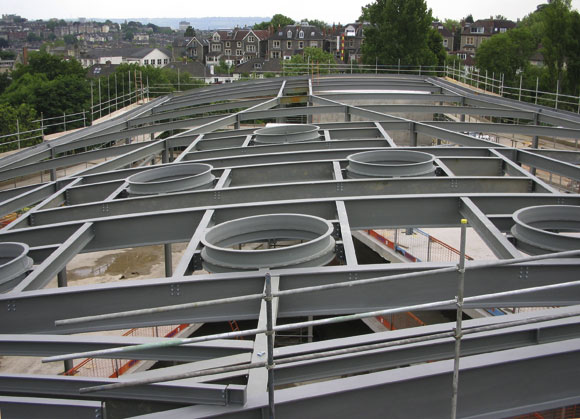 Circular roof lights are a feature of two blocks

Built on a steep Bristol hillside, the Redland Green School is a striking, innovative and environmentally sensitive educational establishment. 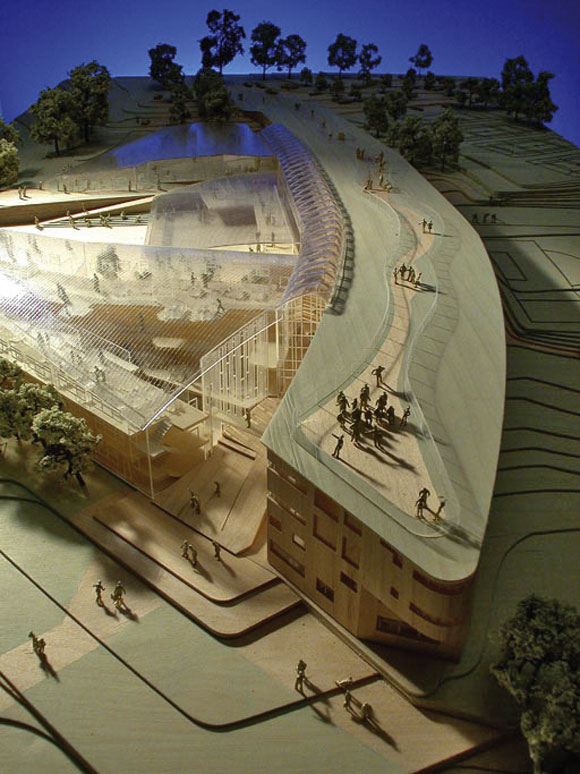 The completed school will blend into the hillside 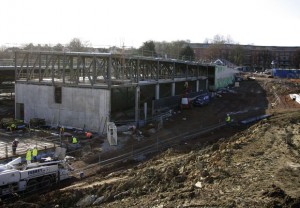 Blocks A, B and C 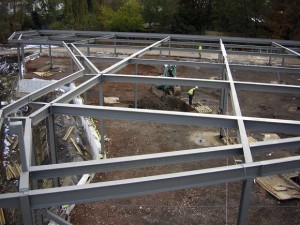 No two sections of the steel roof are identical 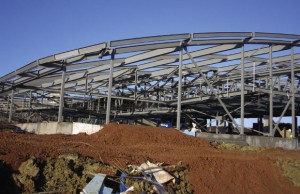 The roof curves in two directions 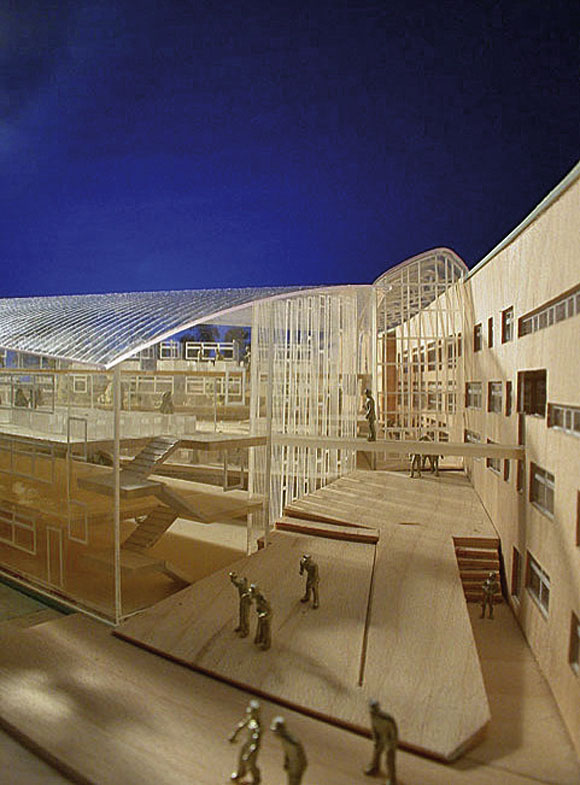 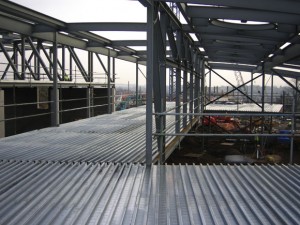 When Bristol City Council gave the go-ahead for the construction of its new school at Redland Green, one of the main objectives was that it would blend into the surrounding hillside.

While the need for the school was never in doubt, many local residents had voiced their concerns that the structure, sitting on a green site once occupied by playing fields, would look a little obtrusive.

Architects and structural engineers BDP came up with a design, whereby the school, which juts out of the hillside, has been designed into the sloping landscape.

The school has six blocks ranging from one to four storeys, and main contractor Cowlin Construction has had to build to 17 different floor levels to compensate for the gradient.

To emphasis the school’s green credentials, the three blocks on the northern side of the development will be linked together under one green roof. On top of a concrete roof slab much of the area will be covered in sedum, which will help to control water run off while ensuring some camouflage for the overall structure.

The contractor says this area will be landscaped and used as an outdoor recreational zone surrounded by a safety barrier. The roof is also part of the school’s water attenuation system. A ditch in the grounds will store excess water temporarily, allowing discharge rates to be balanced. This has been designed to protect properties and allotments, downhill of the school, from being affected by the school’s run-off stream.

A 150m-long tunnel has been drilled from the base of the site underneath the allotments through which water will be discharged at a controlled rate.

Much of the construction is a combination of concrete and steel, with the majority of the levels above ground floor and all of the roofs constructed with steel.

Running the length of the development and separating the six blocks in half is a 180m-long ‘street’ which is covered with an ETFE covering supported on steel trusses. Meanwhile, the three blocks to the south of the ‘street’ are essentially free-standing structures.

Barrie James, Project Manager for SIAC Tetbury Steel, says the main challenge for steel erection was the amount of curves within all of the blocks. Incorporating the buildings into a sloping site means they are curved on plan and section, as they gently snake down the hill. “This made for some interesting cantilevered steel roof detail design as there is no repetition of roof members,” Mr James adds. “I doubt this part of the project could have been done in anything other than steel.”

The three classroom buildings (which will be landscaped) on the north side are known as A, B and C. Block A, nearest the top of the hill, has two-storeys incorporating steel columns and a steel roof.

“Block B was an interesting structure for us,” says Mr James. “This building contains a sports hall, which basically covers two-levels and required seven heavy trusses to give the open plan environment.”

The trusses each weigh 11.5t and measure 18.3m long x 4m deep. The steelwork company says the only way of installing the trusses was to use a 120t capacity crane to lift each section into position. “We then in-filled all steel members with a smaller 50t capacity mobile crane while the truss was still being held by the other crane,” Mr James explains. “We then connected all steelwork into connections which link into the adjacent blocks A and C.”

The other three blocks to south of the ‘street’ vary in height from one level to four levels. Although the structures are free-standing, SIAC has installed two steel screens between the blocks to create an enclosed passageway and two steel bridges linking adjacent blocks.

The middle block of these three – E – also required two large heavy trusses to be installed. Resting on top of hollow section columns, the two members are each 21m-long and span over a canteen.

Once the steel frame is completed the entire school will be clad in imported Canadian timber, which has been pre-dried to double the working lifespan. The wood is in two distinctive colours, with black on one elevation and light brown on the other. These hues are said to help the structure blend into the hillside, especially in the Autumn and Winter.

“Steel wise this isn’t the biggest job we’ve ever done, but it’s certainly one of the most complex,” Mr James says. The structure does look very innovative and none of the local residents have complained about their view being spoilt.