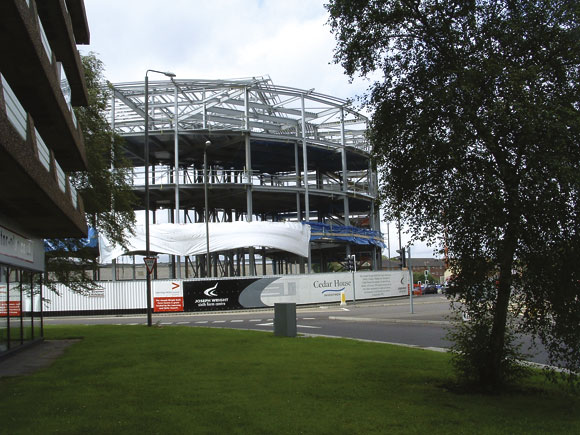 Polymer fibres are replacing reinforcement in composite floors on a pioneering project in Derby, following a research programme supervised by the SCI. David Fowler reports.

Composite steel decking is already one of the quickest and most cost-effective ways of constructing floors in multi-storey buildings.

A new development promises to make it even more efficient. A research programme involving the Steel Construction Institute (SCI), Richard Lees Steel Decking and Grace Construction Products has demonstrated that polymer structural fibre reinforcement can replace virtually all the traditional steel reinforcement, both bar and steel fabric, in composite floors.

This is a breakthrough with implications for quality assurance and for health and safety as well as for cost and timing, because the fibres can be incorporated into the concrete mix.

The first major building to use the technique is currently under construction in Derby. The £12M Joseph Wright Centre is a sixth form college which will form part of Derby College when it opens in September 2005, providing nearly 7000m² of classrooms, labs, and IT facilities grouped around a central atrium.

In composite flooring, the profiled steel decking fulfils the function of permanent formwork for the floor slab during construction, and of providing tensile reinforcement when the concrete has cured. Shear connectors are welded through the steel decking to the top flange of the supporting beams prior to placing the concrete to develop the composite action between the beams and slab.

Additional reinforcement is needed in the form of welded wire fabric over the whole floor area to control shrinkage cracking and to spread the forces generated by the shear connectors through the slab. Additional bars over supporting beams resist bending stresses in the top of the slab. The reinforcement is also needed in a fire, when the strength of the exposed decking is reduced.

Synthetic microfibres have successfully been used for many years to control shrinkage cracks in ground floor slabs, but not as structural reinforcement in this way. Grace Construction Products had developed Strux 90/40 synthetic structural fibre reinforcement with structural applications in floors and sprayed concrete in mind. 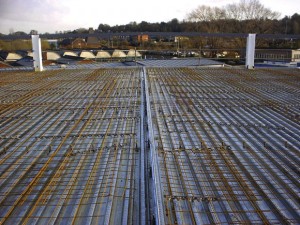 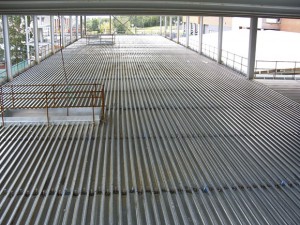 Before and after: Fibre reinforcement eliminates nearly all steel mesh, along with attendant health, safety and logistical problems 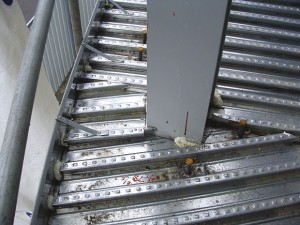 European Product Manager Graham Balmer says: “We wanted to look at steel decking as an application for Strux. We knew we needed partners to assist with the development. The SCI was our first port of call, and from those initial contacts we identified Richard Lees Steel Decking as market leader and approached them.”

Richard Lees Steel Decking was interested, having briefly looked into the use of synthetic fibres itself several years ago.

There are a number of potentially significant advantages from being able to omit the reinforcing fabric from a concrete floor slab. “It’s difficult getting the steel fabric into the building and it disrupts the critical path,” says Richard Lees Steel Decking’s Technical Director Adrian Shepherd.

In the traditional approach the sheets of fabric have to be craned up to the required floor. This disrupts construction of the steel frame itself and means that either a section of floor has to be left out all the way up the building to allow lifting to take place, or else the fabric must be offered in through the side of the building. If it is not to be fixed in place immediately, the fabric then has to be stacked until needed.

When fixed, it forms a tripping hazard and it provides a far from ideal surface on which to stand while placing the concrete floor slab. This operation is usually carried out by pumping, and the pump nozzle is likely to snag on the fabric.

Mike Atkinson, Project Manager for Bowmer & Kirkland, the main contractor on the Derby project, adds that other tricky operations include trimming the reinforcement around columns. Another problem arises when the steel fabric moves under the traffic of the concrete placing operatives, causing one end to rise up into the finished surface, with implications for the concrete finish and for corrosion.

By contrast, synthetic structural fibres can be added to the concrete at the supplier’s plant and pumped into place in one operation, completely avoiding all these potential problems.

Before any of these advantages could be realised, however, the data to persuade clients and structural engineers of the merits of fibre reinforcement had to be gathered. Grace and Richard Lees Steel Decking commissioned the SCI to oversee a test programme.

Tests included full-scale fire tests to demonstrate that the target fire resistance periods could be met. Small-scale specimens were tested to measure the relationship between cube strength, dosage of fibres and longitudinal shear resistance. Push tests to demonstrate the performance of stud connectors in composite slabs were carried out in which two vertically mounted sections of composite slab were symmetrically loaded in shear through a beam fixed between them.

Mr Balmer says the test programme was extremely rigourous. “The SCI wanted to see a lot of information from first principles, for example how the mechanical properties of the fibre and concrete varied with temperature. So it was a bigger exercise than we initially anticipated.”

SCI reported on the tests the partners carried out and produced from the results a set of safe load tables to assist designers using Richard Lees Steel Decking’s profiles. The outcome was that the use of fibre allowed all the steel fabric to be omitted, as well as loose bars over internal beams, for slab spans and floor loading regimes typically required of this form of construction. The fibres are equivalent to transverse shear reinforcement consisting of T20 bars at 100mm centres. U-bars around shear studs on external beams are the only additional reinforcement needed.

Experience on the Derby project showed that the required quality of finish can be achieved. Techniques such as power-floating can still be used.

Bowmer & Kirkland’s Mike Atkinson is enthusiastic about the use of fibres. “Every process has productivity, quality and safety implications,” he says. “If you take a whole process out you take out all the implications.”

The fact that the fibres are added by the concrete supplier at his plant is a major advantage, says Atkinson: “It’s done under their QA process so it’s a controlled regime.” As much as 10% could be saved from the structural cost, and a huge 25% saving in construction time.

Overall, he says: “Using fibre reinforced floors produced a big programme advantage and a substantial reduction in the time taken to prepare the slab.”

Mr Balmer says of the performance on the Derby contract: “We’re very pleased. We’ve learned a lot from this project which we’ll be able to build into future ones.” He makes the point that it is important to be involved with discussions with the main contractor and flooring contractor about what finish will be required and to make sure the right admixtures are specified. “We’re pumping concrete with a high fibre dosage and attention to detail is important,” he says. “It’s important to pay attention to the business of mix design. We would want to advise on the right admixtures to make sure the concrete is workable and finishable.”

He adds that there have been a number of enquiries about the use of the technique from other projects. In summary, he says: “I think it’ll make a lot of people’s lives easier.” 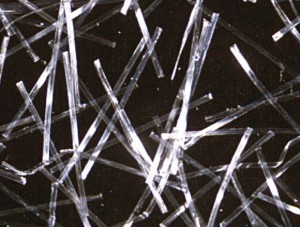 Strux 90/40 was developed by Grace Construction Products’ parent company in the US for applications ranging from structural slabs to sprayed concrete.

Strux is a flat fibre manufactured from a co-extrusion of two polymers. The length of the fibres, 40mm, was chosen as the optimum compromise between reinforcement, the ability of the fibres to disperse through the mix, and ability to achieve the required finish.

The SCI was commissioned by Richard Lees Steel Decking and Grace Construction Products to supervise a year-long R&D programme. It provided technical backup, produced a report and devised design guidance in the form of safe load tables on the use of their products in fibre reinforced composite floors.

The SCI Building Engineering Manager Dr Stephen Hicks says: “One of the main questions was: with no bars crossing the shear connectors, could you rely on the forces being transferred into the slab?” 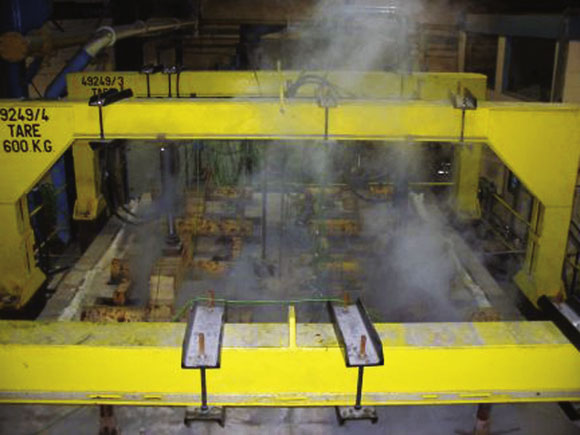 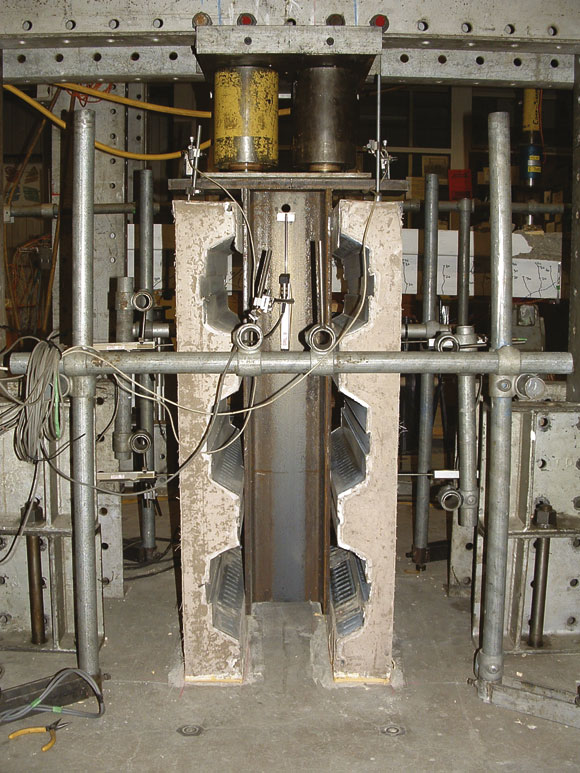 There were also questions over fire resistance. “It wasn’t obvious how well the slab would perform at the fire limit state. Because the fibres have a relatively low melting point, you’d expect some loss of strength.”

Richard Lees Steel Decking had fire-tested a slab in 1988 using standard polypropylene microfibres, the type used for crack control in ground floor slabs. Though the test slab successfully met all the criteria needed to achieve a fire rating, there was concern regarding the extent of cracking over the intermediate support beam and the company did not take the research any further.

Two full-scale fire tests using Holorib and Ribdeck E60 were carried out at Warrington Fire Research Centre. These modelled 3m spans in the most onerous condition, an end bay. The spans were subjected to an imposed load of 6.7kN/m² and both satisfied the test criteria for load bearing capacity, integrity and insulation. Grace Construction Products supplied additional information on the behaviour of the fibres at elevated temperatures, derived from tests undertaken at their headquarters at Boston, Massachusetts.

Tests to BS5950 on small scale specimens were carried out at Bath University to evaluate shear resistance. The specimens have two built-in slots designed to induce failure in pure shear when an axial load is applied. From this SCI was able to produce a design equation relating shear resistance to cube strength and fibre dosage. Three dosages were considered, of which the intermediate value of 5.3kg/m³ was found to be the optimum.

Push tests on two sections of composite deck mounted vertically either side of a vertical steel beam were undertaken at Cambridge University to demonstrate the ductility of the welded shear studs and to assess the effect of the geometry of the steel decking. In profiled steel sheeting the geometry of the deck affects the behaviour of the shear connection, and the test allowed an accurate reduction factor, relating the shear resistance of the profiled deck to that of a rectangular slab, to be determined.

This test was carried out in accordance with BS EN 1919 so that it will be applicable to designs to the forthcoming Eurocodes. It showed that both ductility and shear resistance were slightly higher in the fibre reinforced deck than a conventionally reinforced one.

From the test data SCI developed a numerical model which could be extended to other slab conditions and loads.

“Initially we hoped to demonstrate you could reduce the amount of fabric needed,” says Dr Hicks, “but the tests showed you could dispense with it altogether. We also proved that you don’t need any reinforcing bars to prevent the splitting effect between the deck and the slab.”