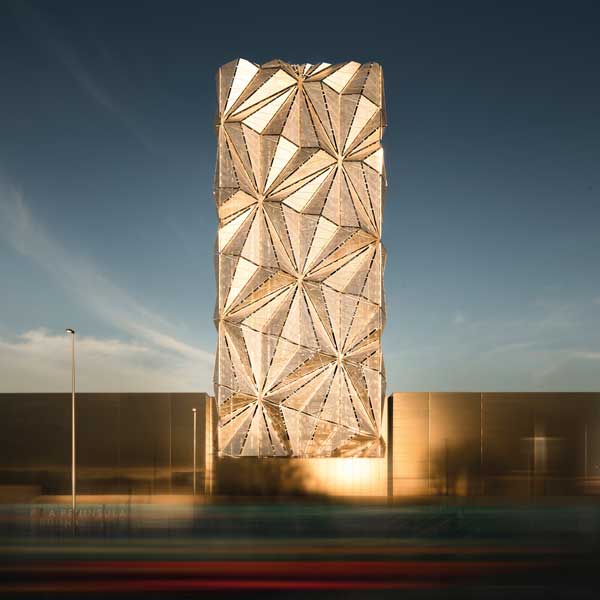 An important part of the structure is the highly distinctive flue tower, measuring 3m x 18m on plan and 49m tall, which houses the equipment serving technically advanced boilers capable of heating the thousands of new homes and businesses in the North Greenwich peninsula.

The cladding of the 49m-high stack tower unites sophisticated engineering and complex optic research to create an impressive sculptural concept on a huge scale. The unique cladding is formed of hundreds of triangular panels – each the height of a London bus – that fold and flow across the surface of the tower.

The resulting complex geometric patterns visually break up the elevations to create an uneven, sculpted surface that plays with the vanishing points and perspective.

The panels are perforated so as to exploit the phenomena of the Moiré effect, and at night an integrated lighting design produces a shifting series of compositions, lit from within the structure.

“The design concept for the tower was to align the flues in a row to create a tower with an unusually slim profile, a fin or ‘blade’ on the skyline. This concept brought many structural challenges including the high wind loading on the long face of the structure,” says C.F. Møller Architect Brian Cody. 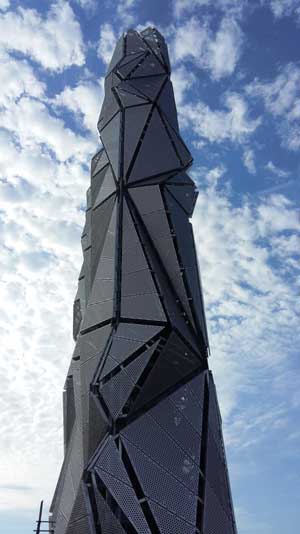 “Fortunately, the tensile strength of steel coupled with its ductility made it the obvious choice as it allowed us to create a strong but slim and highly perforated structure.”

The flue tower is formed from five 49m tall latticed girders, connected by a series of raking beams and bracing on the main east and west façades.

A total of 345t of galvanized steel was erected for the flue tower, which consisted of five main cantilever frames, each formed from three 16m high by 3.15m wide sections spliced at third points on-site and placed 4.5m apart. These were connected together with interleaving diagonal secondary members fixed to both chords.

The prefabricated trussed girder sections were the largest frames ever to be hot-dip galvanized by Worksop Galvanizing. The frames were double-dipped corner to corner in a zinc bath with only millimetres to spare at each end.

Bespoke lifting brackets were designed and supplied by Billington to allow accurate control by the galvanizers during lifting and turning for the second dip.

In summary, the judges say this project forms the gateway to a new and rapidly developing quarter to the east of London and is a remarkable addition to the heavily urban landscape, both during the day and at night.

Steel is used with grace and with flexibility for the future in mind. The collaboration between artist, designers, steelwork contractor and this enlightened client has resulted in a holistically coherent and notable project.