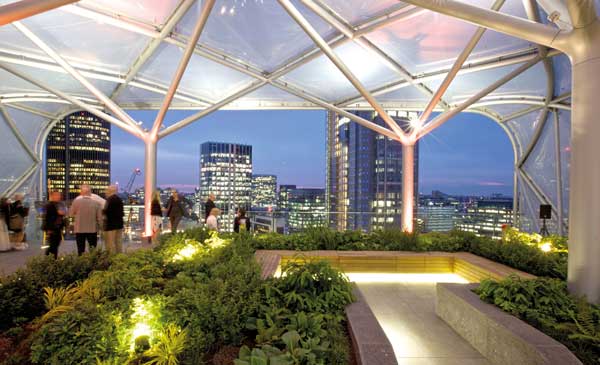 “The roof is a very special top to the building, picking up on the same criss-cross diamond grid as that of the nearby Gherkin,” says Fletcher Priest Architects Partner Ed Williams.

The roof is a light steel structure supported on a series of branch columns and clad with a canopy of ETFE cushions to give rain protection. It has open ends and is conceived as a covered external garden relating to the open terrace garden of the levels below. It wraps over the south façade to clearly define the upper element of the building and to support the solar shading to this southwest facing elevation.

The desired scale, lightness and transparency for this canopy structure could only have been achieved through the use of steel framing.

The structure consists of a continuous CHS (circular hollow section) diagrid frame that spans over the rooftop garden and sails down the façade.  The diagrid structure is supported on eight tree columns that cantilever up from the main building’s 16th floor steelwork. 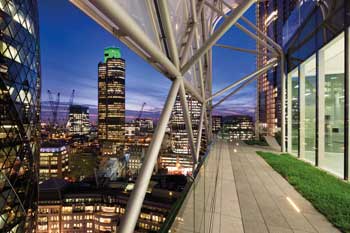 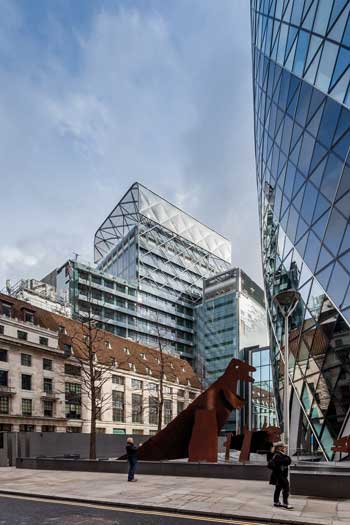 Additional struts extend from the ends of the cantilevered main building steelwork to restrain the clad sidewalls. Further supports are provided off the façade for the open mesh apron, while a bearing detail ensures that these only restrain the steel frame in the direction perpendicular to the façade.

The geometry of the structure is complex – the asymmetry of the support positions that are set out based on the main building grid below results in eight different tree columns, while the roof diagrid is subtly pitched in four directions to generate falls.

The canopy structure was fabricated and installed by Tubecon (the exposed steelwork division of Billington Structures).  Tubecon was appointed early in the design development of the structure to ensure the buildability of the final frame.

Due to the number of site and structural constraints, the only feasible option was to fabricate and deliver the structure in individual pieces, which were assembled and bolted together on site.

However, in order to achieve Fletcher Priest’s intent to give a seamless appearance to the structure, it was key that none of the bolted splice connections were visible. The structure also needed to interface with main building steelwork with all the associated tolerance considerations.

The roof grid joints are fully welded connections formed with the help of complex CNC laser-cuts, a highly accurate and automated process, to the ends of each CHS branch stub member. Joints in the steel diagrid were achieved using hidden splices, where bolted connections are formed within the tubes themselves.

The canopy was fixed to the façade of the primary structure using architectural stainless steel pin connections and brackets. The tolerance levels were such that Tubecon’s team of site engineers had to carry out detailed and accurate three-dimensional locational surveys of the primary structure, before feeding the relevant coordinates back to the Tubecon technical team.

The diagonal-framed steelwork and ETFE canopy is a most effective feature distinguishing this office building in a densely packed city.  Challenging technical constraints were effectively resolved to provide a most desirable and popular roof garden, say the judges.