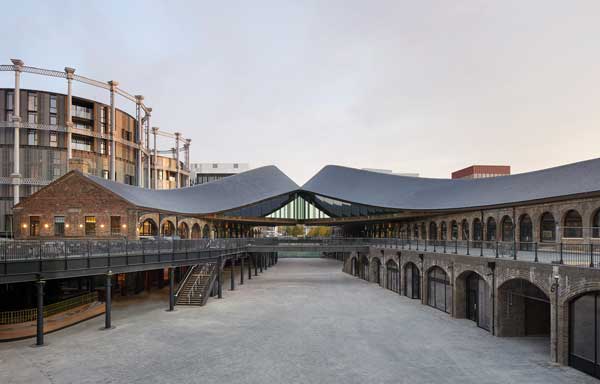 Located within the King’s Cross redevelopment programme, said to be one of Europe’s largest regeneration schemes, the Coal Drops Yard is London’s latest world-class retail outlet.

Two long brick and cast iron Victorian buildings, known as East and West Coal Drops, built in the 1850s for receiving and sorting coal as it arrived in London by train, form the scheme.

The buildings, which are approximately 150m-long and 120m-long respectively, sit side-by-side while splaying outwards in a southerly direction. A new roof structure straddles the area between the two structures, towards the northern end where the gap is about 30m-wide. 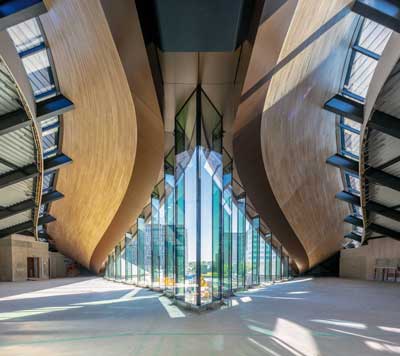 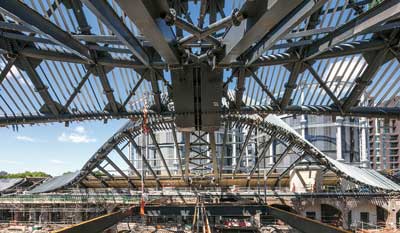 Numerous constraints, particularly the size of the building footprints led the project team, directed by Heatherwick Studio, to reach a design solution whereby the two structures became linked at roof level, by creating a new floor that ‘floated’ over the central yard space below – creating an ideal location for an anchor unit.

While English Heritage and Camden Council gave their permission to link the roofs via a bridge like structure, they requested to connect the roof in a way which maintained the idea that the East and West Coal Drops were two separate entities.

The request lead to the unusual architectural design of the ‘kissing point’ in which the two inner roofs stretch toward one another and delicately touch high above the central courtyard.

The trusses are fabricated from 610mm CHS members with 508mm circular hollow sections (CHS) verticals and bracings made from 219mm CHS sections.

“To create the complex geometry of the sweeping roof structure, steel was the only choice and CHS sections were used as they could be bent to form the curved ribbon trusses,” says Arup Senior Engineer Simon Bateman.

To form the segments, 20 individual components were brought to site by steelwork contractor Severfield and then bolted together before being lifted into place by a 500t-capacity mobile crane.

In order to minimise the amount of working at height activities, Severfield also carried out paint touch-up and purlin installation on the ground.

A series of temporary trestles were installed to support the truss segments during the erection sequence. The trestles remained in place until the roof structure and its supporting steelwork was complete.

This is supported on new steelwork at each end within the east and west buildings. The compression aspect of the system is made up of four fabricated box ‘giraffe’ girders (they look like giraffe necks in 2D elevation).

The tension is taken through a single tie (made from a series of plated steel elements), that is connected to the bases of the ‘giraffe’ girders.

At the middle point of the roof, there is a large kink where the two sides nearly meet – this is the ‘kissing point.’

As there are huge bending moments generated in the steelwork in this area, a large 100t steel node is positioned at this point.

This ‘kissing point’ node, that resolves force through the kink at the centre of the roof is tapered from 900mm to 1,300mm deep at the centre, and has 80mm flanges.

As Severfield Project Manager Dominic Charlton explains: “A new suspended floor is hung from the bottom chord of the ribbon trusses. It is constructed from tapered composite beams, with a 150mm slab over the top. At one end the floor beams are supported on new structure within the footprint of the existing coal drops buildings, while at the other end, it is supported by solid steel hangers.”

Mr Bateman adds: “As well as providing small and light elements for the long span, steel made it straightforward to collaborate in 3D between the design team and contractor, which was vital in this case due to the complexity of the geometry.

“The major components were all fabricated offsite, brought to site in individual sub-assemblies and bolted together at ground level and lifted into place, maximising both safety on site and quality of the finished product.”

In summary, the judges say the kissing roof that links the two original Coal Drop buildings led to a solution of three steel bowstring frames all working together, shaped to reflect the ribbon roof. New exposed steel at deck level is extremely well integrated and carefully detailed to be in keeping with the original structure, strengthening and extending it to suit its new purpose.