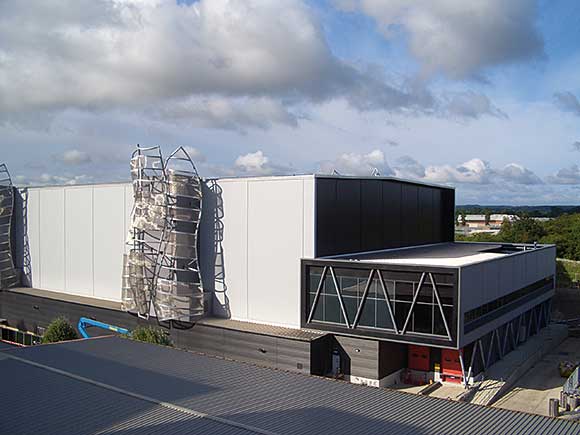 It has been described as the world’s most advanced library storage facility, with a capacity to house approximately 7 million items from the British Library’s national collection on 262km of temperature and humidity controlled storage space, all housed within a large steel-framed structure.

Known as the British Library Additional Storage Building (ASB), it was recently opened on a site at Boston Spa, near Wetherby in West Yorkshire. The fully-automated building will house low-use material including patent specifications, books, serials and newspapers in 144,000 storage containers of three different sizes.

To give some idea of how the facility works, when users of the British Library’s main St Pancras Reading Rooms in London order a particular item that is stored at the ASB, the automated system, which has seven robotic cranes, will identify the bar coded container holding the document and bring it to a library operator for retrieval. The item will then be dispatched to St Pancras where the applicant will be able to inspect it within 48 hours of ordering.

The project was funded by a £26M grant from the Department of Culture, Media and Sport, and is intended to address the pressure for storage space at the British Library’s London facility, as the collection is expanding at a rate of 12.5km of linear shelf space per year.

With a huge amount of racking needed to hold the items – weighing hundreds of tonnes – which was assembled inside the structure once it was erected, one of the initial construction challenges was to get the foundations installed. The racking alone is heavy, but once full of documents the overall weight could be tripled in some areas.

In order to eliminate differential settlement and keep the building perfectly level, the racking system is supported by a 350mm thick, super-flat steel fibre reinforced floor slab which acts as a raft.

“The foundations were heavily reinforced but simple in construction,” says Terry Cocker, Allenbuild Construction Manager. “They have top and bottom steel bars forming a cage.”

Overall the foundations are strip foundations directly onto the excavated stone, and these were only 900mm deep by 1,500mm wide, with pad foundations to the intermediate steel.

Allenbuild began working on the previously greenfield site in June 2006 and completed its work towards the end of 2008. The British Library then undertook a 12 month fit-out programme which included the installation of the racking system which was supplied by specialist firm FKI Logistex.

The main steel frame for the ASB was fully erected over a three month period by James Killelea and Co. The main frame measures approximately 83m long x 50m wide with a height of 24m. It has an 18m x 50m raised services support building at one end and also plant service structures down the full length of each side along with tower riser structures which are used to feed the internal ducting. All of this required 800t of structural steelwork which amounted to more than 6,500 hot rolled members.

To allow the racking system to be installed, the main frame had two access doors built into the steelwork. Once the fit-out procedure was complete these doorways were in-filled with steelwork and clad over.

A steel frame was chosen for a number of reasons, says Paul Terry, Capita Symonds Director. “We looked at other materials, but a steel frame won on cost and speed of construction.”

One of the main stipulations for the ASB was the requirement for large spans to house the racking system. To that end the structure has an 18m span and a 24m span, separated by one row of internal columns. Because of the building’s height (24m), all columns were brought to site in two sections of 11m each, and bolted together on site. Because of the column’s height, temporary steelwork was needed to provide stability while the connecting cross members were installed. 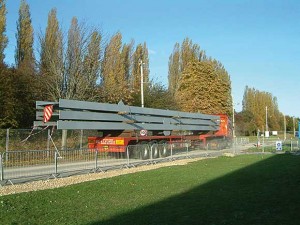 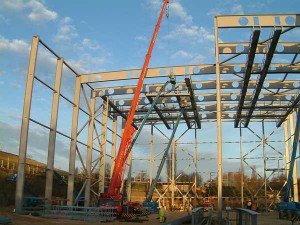 These maintenance walkways thread their way through the girders and span the entire length of the structure.

The large steel frame gets its stability from cross bracing located around the building’s perimeter, while an attached two-storey administrative block, located above a loading bay, is formed by a more traditional beam and column method.

Summing up the successful completion of the project, Steve Morris, Director of Finance and Corporate Services at the British Library, says: “The design and construction of the ASB has been a huge task, involving Library staff along with external providers. It is tremendously gratifying to see the building functioning as designed.”

Capita Symonds had been involved with the ASB project since 2003 when the team carried out the initial feasibility study. Mr Terry comments: “It is great to have developed through the many stages a working solution which achieves a change in the approach to the storage and retrieval of important documents.” 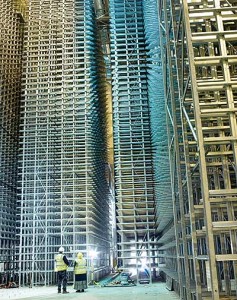 The project has a number of cutting edge technologies to keep the important books and documents safe and sound for posterity. Thåçe structure is the first of its kind to incorporate automated storage and retrieval systems (left), optimum environmental controls, and pioneering low-oxygen fire prevention technology in a single building.

Although sprinklers are usually the preferred solution for libraries (wet books can be freeze dried) the ASB has adopted a low-oxygen system of fire prevention which allows oxygen levels to be kept to just 14.8% as fires can only occur if oxygen levels are at 17% or above.

To support this, the building is also one of the most air-tight in the UK with a leakage rate specification of not more than 0.5m³ of air per square metre of wall per hour.

Other notable features include the air conditioning system which maintains a controlled microbe free climate at a constant temperature of 16°C and constant humidity of 52%.