40 Years Ago – Steelwork on the Motorways 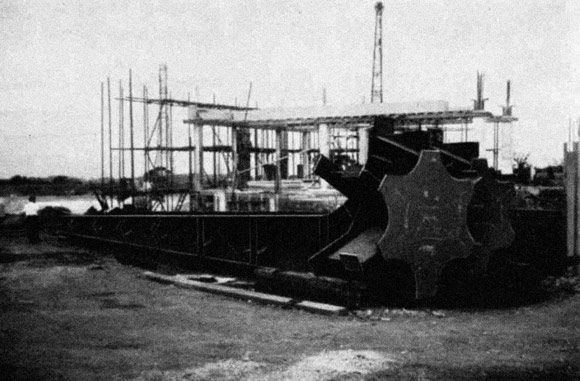 The main area of the new Forton Service Area on the M6 consists of a two storey building housing a cafeteria, transport cafe, toilets, rest rooms, showers etc. This is connected to a 92 ft. high tower containing – 62 ft. above ground level – The Pennine Tower Restaurant capable of seating 150 people, and above this is a sun lounge. On the opposite side of the motorway is another transport cafe, a smaller cafeteria and other facilities, linked to the main area by a footbridge over the M6.

The main area, situated on the SW side of the motorway, is unusual and striking. Both buildings are glass walled and hexagonal in shape, and the tower is a landmark visible for considerable distances in all directions. From the sun lounge Morecambe Bay can be seen to the west, and the Trough of Bowland to the east.

A reinforced concrete frame with a concrete plate floor was originally investigated but, in order to meet the architectural requirements, an all-welded mild steel frame was chosen, with the beams at both levels arranged on a diagonal grid. To ease welding problems and to reduce the deflections of the long cantilevers mild steel was used in preference to a high tensile steel. 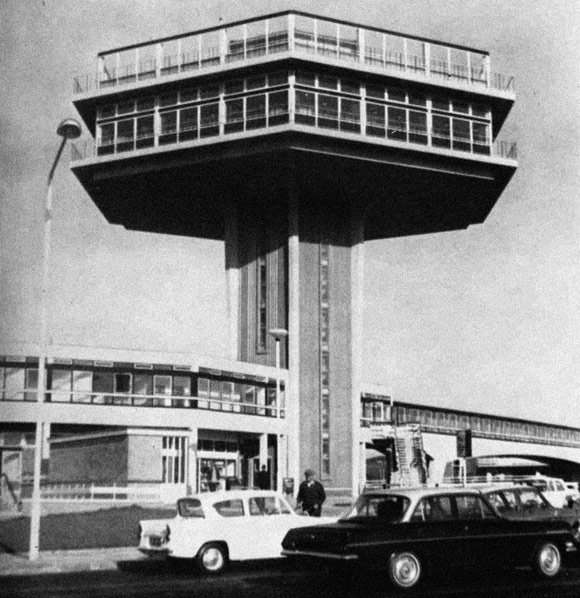 The flanges of the main restaurant floor cantilever beams and of the stanchions are 13/4 in. thick. The grid design of the floor involved a junction of three main cantilevers  and two collar beams at the stanchions at each of the two floor levels. A star section of stub ends was fabricated with the column, leaving straightforward butt joints in each member to be welded on site.

Because of the high moments and shear stresses involved at the cantilever knee the design of the main intersection of these beams on the columns was complex and it was appreciated that the combination of heavy sections and ‘multi-dimensional’ shape would lead to welding problems due to inherent restraint. For this reason notch ductile plates were used at critical points carrying tensile stresses in the final loading and a detailed welding procedure was prepared incorporating pre-heating of the thicker plates and the use of low-hydrogen electrodes.

Site weding of the butt joints in the cantilevers was done without difficulty with the floor steelwork assembled and lightly service bolted in order to provide location without undue restraint. Intersections in main members of the floor grid remote from the columns were joined with high strength friction-grip bolts.

During erection the main restaurant beams were supported on trestles and adjustments for welding ‘draw’ and the eventual deflection were made on removal of the trestles. On completion the edge mullions between the restaurant and sun lounge floors were post tensioned to ensure that both floors worked together under varying degrees of superload. This also reduced the support moment at the root of the sun lounge beams and thus reduced the depth of those beams within the restaurant. The stanchions were designed with fixed bases and to prevent uplift the ends were built 12 ft. deep in a massive foundation block.

A propriety decking and shear studs were used in conjunction with the concrete floor slabs to distribute loads on the ‘saucer’, to keep internal deflections to a minimum, to add inertia to the beams to reduce deflection, and also to act as shuttering.

The service area structure is 300ft long by 60ft wide and houses two restaurants, a food bar and two cafeterias all above the motorway

The concept of the 18-acre service area recently constructed for the Ross Group on the outskirts of Leicester is entirely different from that of Forton. It is essentially a 60 ft wide bridge straddling the M1. The main restaurant building – housing kitchens, two restaurants a food bar and two cafeterias – is a steel framed structure 300 ft long by 60 ft wide built on a 126 ft span bridge with extensions at each end. Structural steelwork was the most economical means of providing long spans with light roof loading. The trusses are at 10 ft centres and span 52 ft on to 6 in by 4 in rectangular hollow sections as stanchions overhanging 4 ft at each end. They are 2 ft 41/2 in deep at the centre and 2 ft deep at the ends: the top member – a 7 in by 31/2 in channel with flanges downward – is cambered to give the required roof falls. The bottom member is a solid 2 in square bar: 11/8 in square bar is used for the diagonals. As the trusses are visible in parts of the building this arrangement gives a neat looking truss and makes maximum space available for the installation of the ventilation trunking. The metal deck roof is fixed directly to the top member.