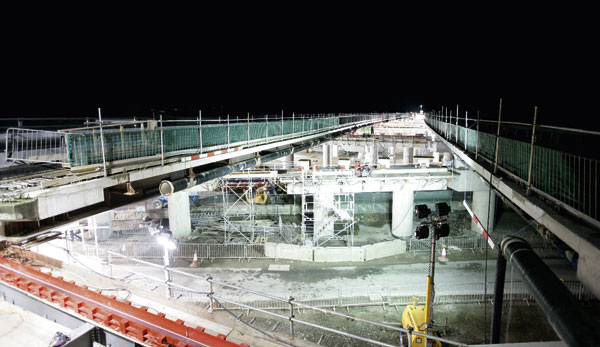 More than 5,000t of steel composite bridge deck has been slid into place in Oxfordshire as part of the reconstruction of the Wolvercote Viaduct, which carries the A34 over the A40, the Oxford Canal and a main railway line.

The 250m long deck was moved 16m from a temporary position towards new viaduct piers. Vertical jacks lifted the structure before hydraulic rams were used to push the deck in 500m increments across eight steel slide paths coated with a low friction material. 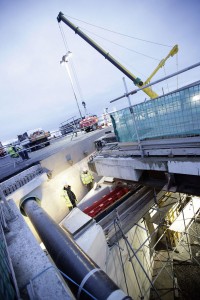 Costain Project Manager Darren Dobson said: “The bridge slide was a huge success and was carried out with only limited disruption to road users.”

One of the main objectives of the entire scheme was to replace the old concrete viaduct with a new steel composite structure, while maintaining peak time traffic flows. To achieve this a dual lane offline temporary viaduct, carrying southbound A34 traffic, was initially constructed adjacent to the existing southbound bridge.

New piers were constructed and the temporary bridge’s deck was slid onto these to form the new southbound structure. Steelwork contractor for the project was Mabey Bridge.