Taken from Building with Steel 1968 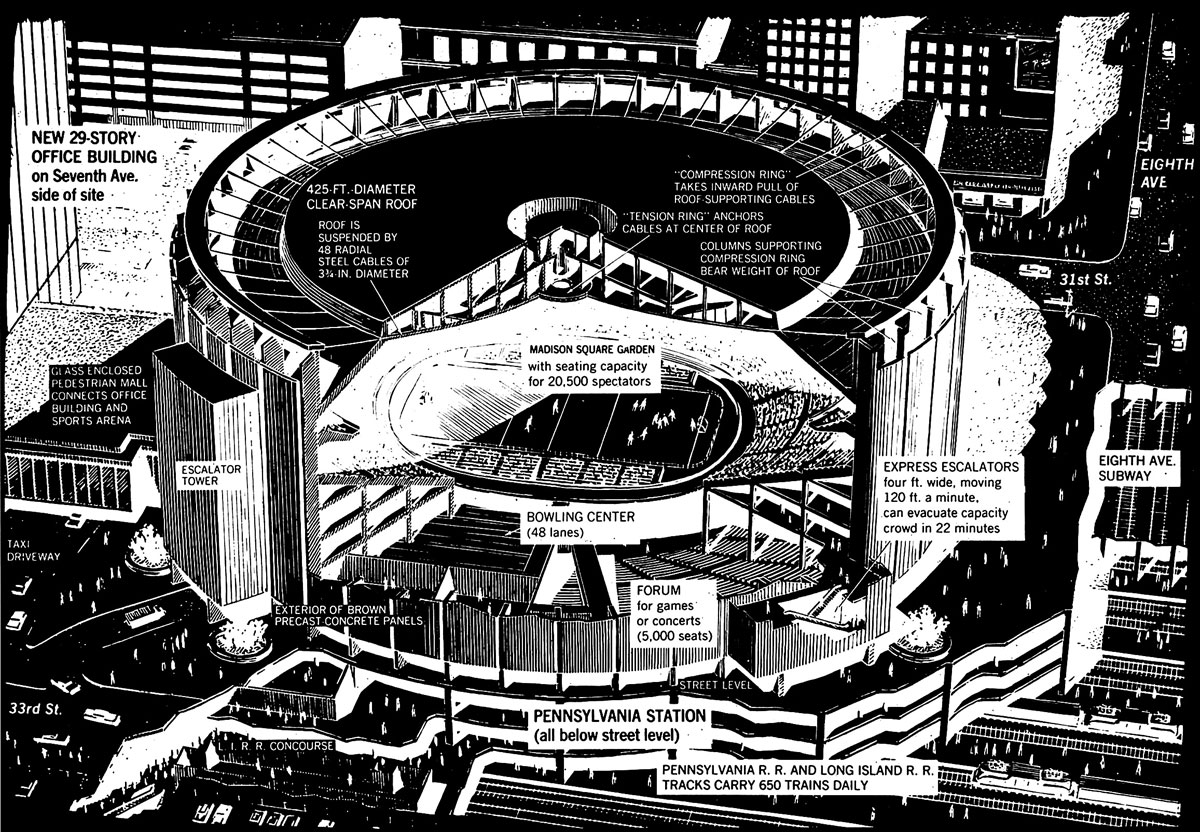 This huge circular structure is of outstanding interest because of the number of ‘largest ever’ features to be found in its design. Most importantly, it has a 404 ft diameter steel cable suspension roof, the first permanent roof of this kind in New York City and the largest in the US, and most likely the world.

This particular roof design is a relatively recent development in the building field: its great advantage is that it eliminates the need for internal columns, with the result that spectators have a clear view of the arena from any of the 20,234 seats. This column-free area – almost 3 acres – is believed to be the only one of its size in the world with two steel framed storeys above the cables.

The suppliers claim that weight-for-weight steel cables in tension are 3-4 times stronger than standard structural steel and that the relatively low cost of erecting cables makes the system ideal for long spans over column-free areas. In this particular case the cables support not only a steel deck and concrete roofing material but also two additional floors of steel, housing a secondary cooling tower, as well as slighting and mechanical equipment. 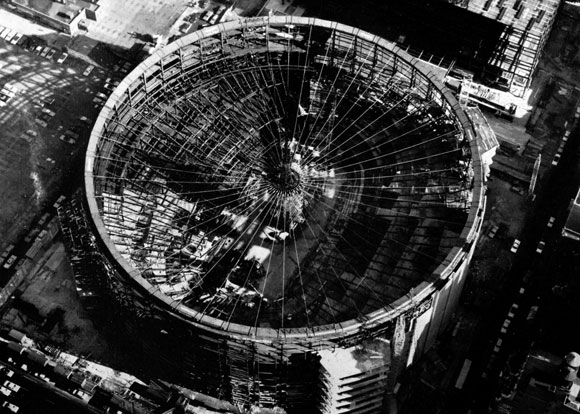 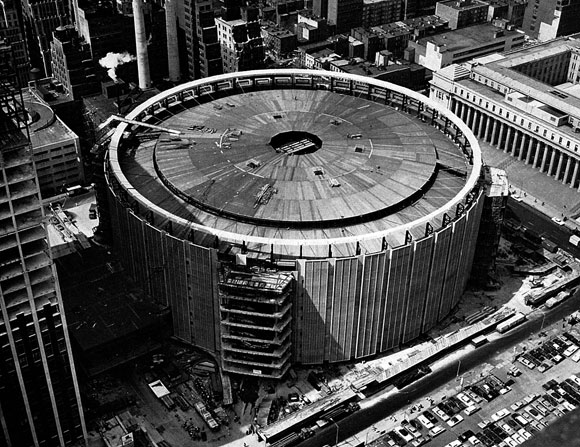 The roof system may be likened to a bicycle wheel mounted horizontally on top of 48 steel columns so arranged as to support the outer rim: although the hub is unsupported it remains rigid because the steel cables connecting the rim and hub are under tension. The roof is only 21 ft less than the extreme diameter of the 153 ft high drum-shape building.

Total weight of the 48 zinc-coated steel cables in the roof system is 163 tons. Each cable is 1¾ in diameter, the largest ever used in any roof structure, and composed of 271 steel wires: the rated ultimate strength of 822 tons sets a new record for a building of this type. Two sockets hold each cable in place, those for the inner tension ring each weighing 659 lb.

When erecting the 14,000-ton steel framework the perimeter columns were lifted into position by a 60-ton crane and a 70-ton derrick. The arena floor, 45 ft above street level, is supported by heavy welded plate girders with flange site splices and 36-in wide cover plates built up and developed by connecting the plates together with high strength friction grip bolts. Roof steelwork was erected from this floor level by a truck crane equipped with a 170 ft boom and a 30 ft jib.

At roof level, on top of the perimeter columns, 48 welded box sections – each 26 ft long, 3 ft deep and 8 ft wide and made of corrosion resistant weathering steel – join to form the compression ring. From this ring the steel cables are stretched to a 100 ton, 41 ft diameter, manganese-vanadium steel tension ring composed of four field-welded sections.

Below the arena there are two levels containing a 5,000 seat amphitheatre known as the Forum, a 501 seat cinema, a Hall of Fame, a Gallery of Arts and a 48 lane bowling centre. The entire structure is faced with precast concrete panels of varying shades of brown aggregate, exposed and separated by buff coloured recessed concrete coves, illuminated at night.

The centre is part of a massive project on an 8½ acre site to be known as Pennsylvania Plaza: landscaping and open plaza area occupies 53% of the overall site. The work includes modernising and redeveloping a railway station over which the Centre is being built, so that all railway and terminal facilities are underground. This has been going on simultaneously with the erection of steelwork for the Centre.

Because the Centre complex – which also includes a 29-storey office building – straddles the rail tracks and main terminal facilities, many very large and heavy steel assemblies were required. The largest was a girder section 155 ft long, 13 ft deep and 3 ft wide weighing 96 tons and joined to two other girder sections to form the main support for the arena floor, the combined girder being 282 ft long and weighing 213 tons. Both the main section and the combined girder are believed to be the largest ever used in a building in New York City. In all, approximately 15,000 tons of steelwork were used in the foundations for the complex, built 50 ft downwards from street level to form a rectangular network covering an area of 364,000 ft, almost as large as eight football fields. All this work was done with minimum interference to train schedules and the various businesses within the terminal.