London 2012 Velodrome is racing ahead 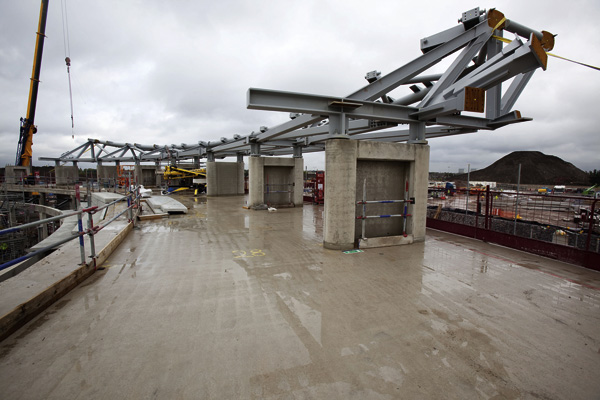 Construction work on the London 2012 Olympic Velodrome is speedily progressing with steelwork now visible above the structure’s base.

The 6,000 seat Velodrome will host the Olympic track cycling events and its design features a lower tier of 3,500 seats and an upper tier of 2,500 seats. The two tiers will be divided by a 360 degree concourse level offering views over the Olympic Park.

Steelwork is now well underway with sections supporting the upper tier seating and the roof being lifted into place. More than 2,500 sections of steelwork will be installed by steelwork contractor Watson Steel Structures.

The steelwork will rise in height by 12m from the shallowest point to the highest part of the structure, helping form the distinct double curved structure which has been designed to reflect the geometry of the cycling track.

Olympic Delivery Authority Chief Executive David Higgins said: “The Velodrome will be another landmark venue and we can now begin to see the striking architecture take shape.

“Steel fabricated in the North West is playing an essential role in shaping the venue and demonstrates the role that companies across the UK are playing in helping deliver the infrastructure for the London 2012 Olympics.”