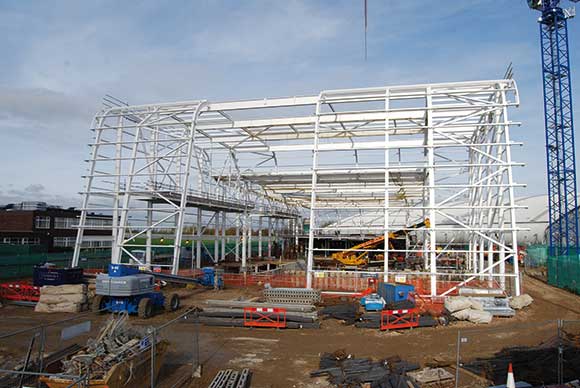 Once the majority of the steel frame was up, excavation of the pools began

The need for a fast construction programme and a structure with long open spans resulted in the choice of a steel frame for a new swimming pool and diving facility in Southend.

The eagerly anticipated build-up to 2012 Olympic Games is coming to Southend-on-Sea, as a new swimming pool and diving facility under construction in the Essex seaside town has been selected as a pre-Games training camp.

Supported by Sport England, the project includes an international standard diving pool, a 25m eight lane competition pool, seating for 398 spectators and is also expected to be a key training facility for Team GB’s diving and Paralympics team ahead of the London Olympic Games.

“This is a highly prestigious scheme for the town,” says Kate Trueman, Southend Borough Council’s Leisure and Sports Manager. “It will be open more than a year before the Games, allowing plenty of time for various teams to train here, and putting Southend on the sports map.”

Adjoining the town’s Garon Park leisure and tennis centre, the new facility wraps around and links into the existing building. A new entrance for both facilities is being constructed and the entire project is due for completion by September 2010, the culmination of a 67 week construction programme. 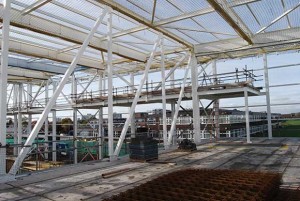 The site is very tight, with existing buildings and an outdoor sports ground on one side, and a school running along another site boundary. Bearing this in mind, main contractor ISG Jackson had to sequence the early works, whereby the site was levelled and contiguous piles installed around the pool and diving area, prior to the steel frame being erected.

“Sequencing was very important,” explains Phil Holland, ISG Jackson Site Manager. “The work area is quite small so we had to limit the number of trades on site at any one time.”

Once the majority of the steelwork was erected, by contractor D.A Green & Sons, the pools were then excavated. This was the only viable option as some of the steel members are so big they needed to be lifted into position by a crane positioned within the structure’s footprint.

“If we’d have dug the pools first there just wouldn’t have been any room to put the cranes,” explains Mr Holland.

“We had to leave a couple of critical openings in the steel frame to allow plant equipment and materials access into the structure,” adds Ian Burchnall, D. A Green Contracts Manager. “Once the facility’s interior is completed we’ll fill in these openings with secondary steelwork.”

Because of the site’s confined position the section of the steel frame adjoining the existing building was erected first. The steelwork was then erected in a southwards direction towards the site’s access point.

“In this way we were able to bring our steel to site and erect it in such a way that we always had room for storage and never hemmed ourselves in,” says Mr Burchnall.

This sequence meant the changing room area, which also contains a mezzanine floor with a dry diving practice area, was erected first, followed by the frame for the main pool and then finally the area over the diving pool.

The majority of the structure features long clear spans with the frame stabilised with braced bays along the main elevations. The width of the main structure is 25m, consequently the long span roof rafters were brought to site in two pieces (12.5m each) to avoid any delivery problems.

All steel erection was conducted via mobile crane and the roof rafters were bolted together on site and then lifted into place as one 25m long 5t section.

To provide the required long spans three storey-high trusses have been installed within the structure. One truss, measuring 20m long x 7.5m high, spans the main structure’s width and supports the mezzanine floor to provide a column free area between the pool area and the changing rooms. 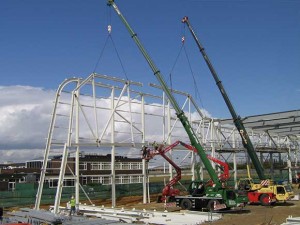 The other two trusses were made up of two halves and were positioned side-by-side along the western elevation supporting a suspended plant area. Overall these trusses are 53m long and rise from 4m deep to 9m. They were brought to site ‘piece small’ before being assembled into four parts.

“Access to the site dictated the size of steel sections we could bring to site,” explains Mr Burchnall. “Once we had assembled the two halves of each truss, each weighing approximately 5t, they were erected in a tandem lift with two mobile cranes, which held them in position while they were bolted together.”

The steel frame building will also feature a range of architectural finishes to its facade, including large areas of curtain walling, render panels and metal cladding, with a metal clad roof. One main elevation, opposite the seating area, will be glazed and so 17m high 406 diameter CHS columns have been used along this perimeter, purely for aesthetic reasons.

The scheme will achieve a ‘Very Good’ BREEAM rating and incorporates a lagoon area to assist with water attenuation.

Summing up the project, MLM Director Rob Seller, says: “The complex was always going to be a steel structure because of its shape and long internal spans. However, early in the design process we did some value engineering and changed the design from a portalised frame to its present braced frame. This resulted in a huge cost saving for the client as the steel tonnage was reduced from 600t to 325t.”

What’s in a world class facility? 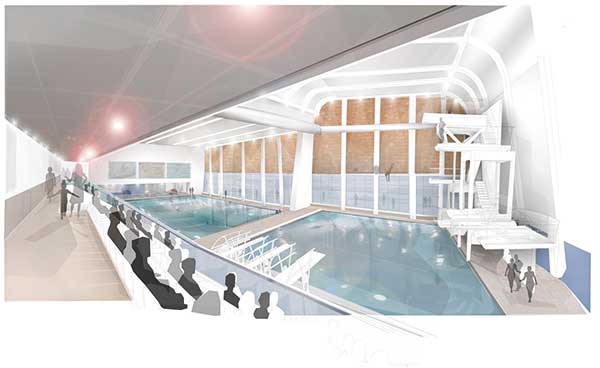 Southend’s new swimming pool and diving facility will replace the town’s aging Warriors Swim Centre and its main focus will be a 25m eight lane competition pool. Adjacent to this will be a 15m × 6m leisure and learner pool, and a diving pool with 3m, 5m, 7.5m and 10m platforms, each 3m wide for synchronised diving. The 6m deep diving pool will include a hydraulic movable floor to enable it to be used for swimming lessons and/or exercise classes.

Overlooking the pool and dive area is a tiered seating area consisting of 398 fixed seats as well as wheelchair spaces.

Other facilities will include a dry diving training area equipped with special harnesses and trampolines along with changing rooms, showers and a new entrance area with access into the adjacent leisure and tennis centre.