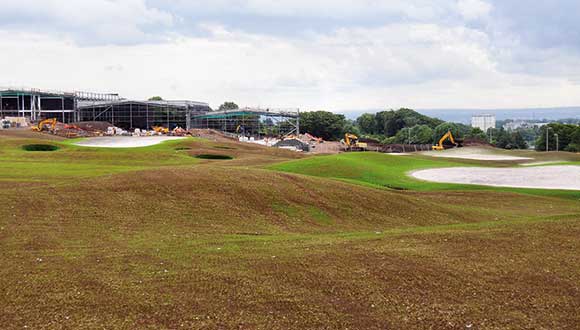 The project’s building has two steps because of the sloping topography.

One of the UK’s largest public sports centres is under construction in East Kilbride. Sporting facilities on offer at the Playsport Scotland project will include golf, football, tennis, badminton and swimming.

The Playsport Scotland development covers an area of 90 acres and is located adjacent to the Kingsgate Retail Park near East Kilbride, South Lanarkshire. The complex will include a nine hole PowerPlay golf course, a 58 bay golf driving range and golf academy, one of the UK’s largest indoor tennis and badminton centre, five-a-side and seven-a-side football pitches and a health and fitness centre with a 25m swimming pool. 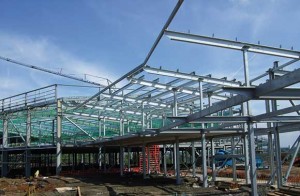 Indoor facilities are housed within a 20,438m2 steel framed building erected by Atlas Ward Structures. As well as the tennis and fitness areas, the building will also contain a family centre with adventure golf, laser games and soft play area as well as conferencing space, a restaurant and sports retail outlets.

The main part of the building is a four span portal frame which incorporates an 8m slope. To take into account the topography of the ground the building has three sections, two which step down 4m each.

The upper section contains two floors, the family area and health and fitness zone on the ground floor, and retail and conference facilities above.

Stepping down the slope, the two lower sections of the portal frame both contain single storey tennis court zones.

“The building had to follow the profile of the land,” explains David Mellow, Engineer of RPS. “Just below the surface the ground is basalt rock so earthmoving wasn’t economical and the design had to incorporate steps.” Because of the ground conditions, the building is founded on shallow pad foundations above the rock to avoid differential settlement.

The lower tennis court areas dictated the overall grid pattern for the entire structure. “A number
of restrictions come into play with tennis courts, such as rooflight positioning, and this meant the optimum grid was set at 7.6m,” adds Mr Mellor. 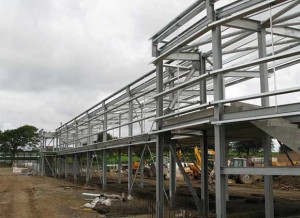 One section of the steel building contains a mezzanine level.

From the upper level of the main building a two tier driving range structure connects to a small two storey football pavillion.

Steel erection took 12 weeks and Atlas Ward began by erecting the upper section of the building and then worked down the slope.

“Despite the bad weather and the exposed nature of the site, the steel went up without any problems,” sums up Atlas Ward Construction Manager Andrew Kilby. “There was a road right to the site and we used mobile cranes for all the erection.”

Playsport Scotland will be the nation’s most advanced public sports development. It is due to open in spring 2009.