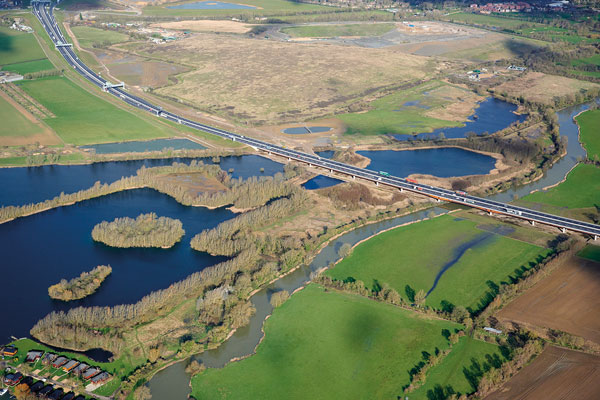 The A14 Cambridge to Huntingdon scheme, said to be Britain’s biggest road-building project has opened for traffic eight months ahead of schedule.

The £1.5bn scheme will transform journeys on the A14 in Cambridgeshire, shaving up to 20 minutes off journeys and strengthening links between the Midlands and the East of England, while improving access to and from the UK’s largest container port at Felixstowe.

A number of bridges are included in the completed scheme, the biggest of which is the 750m-long River Great Ouse Viaduct.

Willie McCormick, Construction Director for the A14 Cambridge to Huntingdon Improvement Scheme on behalf of Highways England, said: “This viaduct over the River Great Ouse, south of Huntingdon, is by far the biggest bridge on our 21-mile project. It’s taken over 18 months to build, and it carries drivers over the river and floodplain.”

Highways England Chief Executive Jim O’Sullivan said: “This upgrade is a key addition to our national infrastructure, better linking the North of England and the Midlands to the East of England and to the Haven ports. It also brings economic benefits to the wider region and local towns and communities.

“Being able to open it more than six months early and on budget shows what the UK construction industry can achieve with an integrated client team, common goals and targets, and a shared vision of success.”