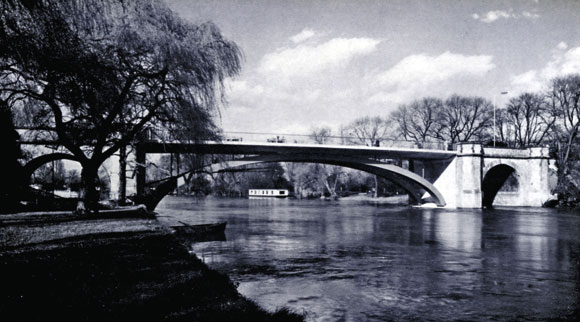 Victoria bridge, which carries the Datchet-Windsor road over the River Thames, was one of a pair constructed about 1851 by the London and South Western Railway Company as part of the compensation for royal land made available for their railway work.

The original bridge was a five ribbed cast iron elliptical arch flanked by arched abutments. As a fixed arch it was subject to damage from even the slightest movement of the foundations. The arch ribs became cracked at the quarter points and, despite several repairs, a load limit of 3 tons became necessary after WWII. A military heavy girder bridge was constructed over the old bridge in 1963.

The new bridge was designed by Mott Hay & Anderson to accord with the special requirements of the site and be visually acceptable in the context of the original arched abutments. The new bridge allows a headroom of 20 ft 9 in for river traffic above normal water level, and the span between bearings is 123 ft 6 in. It follows the original design of an elliptical arch, providing the widest possible opening for vessels.

The two steel box arch ribs are will able to resist the bending stresses which result from adopting this shape. Bending due to fixity is eliminated, as the ribs rest on new pinned bearings at the abutments. Each arch rib is a welded box of high yield stress steel to BS 963, 3 ft 6 in wide by 2 ft 6 in deep. The corner welds connecting the 1¼ in flanges to the 5/8 in web plates were made externally in V-preparations within the thickness of the flanges. There is a single site splice at mid-span. The deck is a 32 ft wide single reinforced concrete slab.

The ribs were preassembled and checked, and then transported to the site by barge. A 100-ton travelling crane standing on the abutments erected the half ribs, which were supported on a temporary mid-river trestle until spliced. The bearings were carefully jacked riverwards until the centre splice was closed, and then trued up to 0.010–0.012 in  clearance. After a loading test, measured deflections were less that those calculated, probably owing to the stiffening effect of the deck acting compositely with the arch ribs for part of the span.