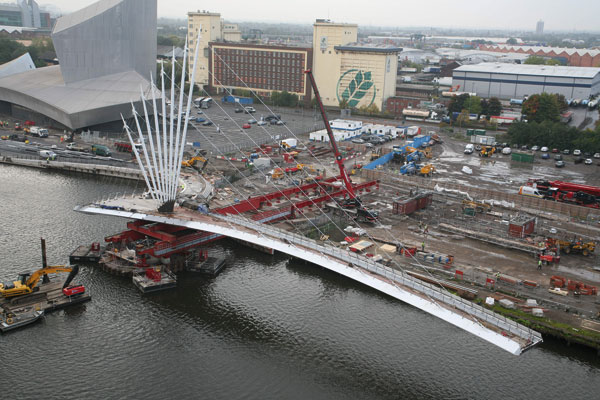 An £8.3M state of the art cable stayed swing bridge, linking Trafford Quays with the Media City development in Salford, has been slid into position by main contractor Balfour Beatty Regional Civil Engineering.

Spanning the Manchester Ship Canal, the 880t steel footbridge was assembled by steelwork contractor Rowecord Engineering on an adjacent quay, and once completed it was slid 50m into its final pivot position.

The slide procedure was carried out over 36 hours and involved jacking up the structure approximately 500mm off its temporary supports onto a skid track system that incorporated a pair of 40m-long ‘Kursk’ beams.

The steel beams are referred to as ‘Kursk’ beams as they were used as part of the recovery operation in 2001 to raise the Russian submarine of the same name.

Finally the structure was jacked down onto its slew ring bearings where it will pivot using six hydraulically operated drive motors to rotate the bridge between its open and closed positions.