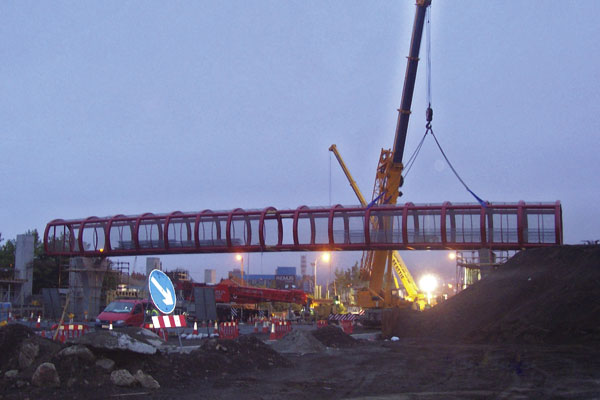 Fisher Engineering has erected a new steel footbridge over Belfast’s Westlink motorway to provide pedestrian access between the city centre and the Royal Victoria Hospital.

Part of the on-going Westlink road widening scheme, the bridge is a straight replacement for an older structure which was torn down earlier this year.

The entire steelwork for the 48m-long, 3.4m wide and 3.5m-high bridge was fabricated at Fisher Engineering’s Enniskillen facility over a 10 week period, before being erected in one overnight operation.

Using two 200t capacity mobile cranes, the bridge was lifted into position as two fully completed 35t sections. “These two halves were lifted simultaneously and spliced in mid-air before being placed on to their two supporting concrete piers,” explained Brian Keys, Project Manager for Fisher Engineering.

The fully enclosed footbridge is made from four tubular 355mm diameter steel beams supporting the floor, with 300mm diameter steel hoops forming the cage-like pedestrian bridge form. Wrapped around the hoops, the structure’s sides and roof are entirely clad in a stainless steel mesh.

Fisher Engineering also fab-ricated, supplied and erected four steel access ramps for the city centre side of the bridge.

Each of the ramps is 30m long and weighs approximately 20t. Similar in form to the bridge, the ramps are not however fully enclosed as they don’t have roofs.

After the bridge was installed, Fisher returned to site a few weeks later and erected all of the ramps at the end of September.