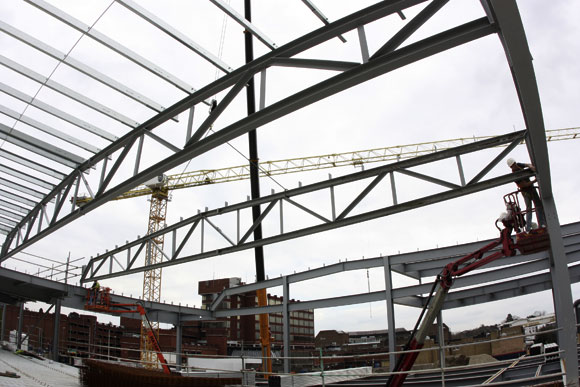 The centre of Farnborough is undergoing a much needed make-over with the construction of new shops, a hotel and leisure facilities. NSC reports on how steel is playing a dominant role in the transformation of this Hampshire town.

A whole raft of town centre redevelopments around the M25 were mooted a few years ago, and while some have been put on the back burner due to the current financial climate, one scheme in the Hampshire town of Farnborough is definitely on stream.

An £80m regeneration project covering a 14 acre site will transform a large swathe of the town centre, replacing some tired and unloved 1960s retail outlets. Under construction are 57,000m² of new shops including two large anchor stores, leisure facilities and a 77-bedroom Travelodge hotel.

Alongside the commercial aspects of the scheme, there will be one, two and three bedroom apartments and some affordable housing units in partnership with Thames Valley Housing Association.

Councillor Peter Moyle, Leader of Rushmoor Borough Council, said: “I am absolutely thrilled to see construction work beginning on the town centre; it’s great news for the economy of the town and local residents. We watched the town centre being transformed by the demolition work and now we can look forward to the new centre rising from the rubble.” 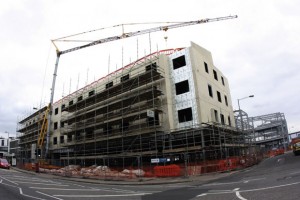 A Travelodge hotel fronts the development 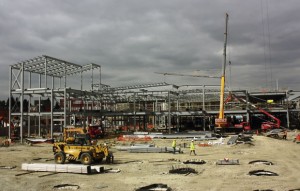 Following the demolition of the site’s existing buildings and some essential infrastructure work, which included the installation of new underground pipes and cables, the initial phases of the project are now on schedule for completion before the end of the year.

Developer for the project Key Property Investments, a joint venture between St Modwen Properties and Kuwaiti-based Salhia Real Estate Company, is confident that locals will be using the first phase of the scheme to do their Christmas shopping.

The new development, known as The Meads, is adjacent to the existing Kingsmead Shopping Centre and parts of the new scheme’s block 3 will wrap around and connect into the retained shopping complex.

The project has been divided into four main blocks and a multi-screen cinema complex.

Block 1 of the scheme contains the Travelodge hotel and a large ground level Sainsbury supermarket with a Gala Bingo Hall above. The hotel has three levels and sits above some ground floor retail units.

Steelwork contractor Conder Structures erected the frame of the hotel at the beginning of its programme in January, and has since been erecting steel in an eastwards direction away from the hotel with completion of block 1 set for this month (May).

The height of the hotel is 13.5m to eaves and is constructed with hot rolled structural steelwork up to first floor level with Metsec cold rolled steelwork above for the hotel’s frame and internal partitions.

Directly behind the hotel, and part of the overall block 1 structure, the ground floor level Sainsbury’s supermarket covers a footprint 15,000m².

The construction of the supermarket is based around a large 8m x 16m grid with four long internal spans keeping columns to a minimum. Above this, the Gala Bingo hall’s roof is formed with a series of 20m long 2t lattice trusses which provide the facility with its requited column free area. Ten trusses make up the roof with one end cantilevered from the column and designed with a moment connection. The trusses are formed from 152 x 152 x 30 column sections and linked to a transverse beam from a 914 x 419 x 388 beam located on the level below.

“The Sainsbury’s store has been the driver for phase 1 of the scheme,” comments Ian MacIver, Project Engineer for Michael Bradbrook Consultants. “They required a large open floorplan and this was then carried on throughout most of the structure.” 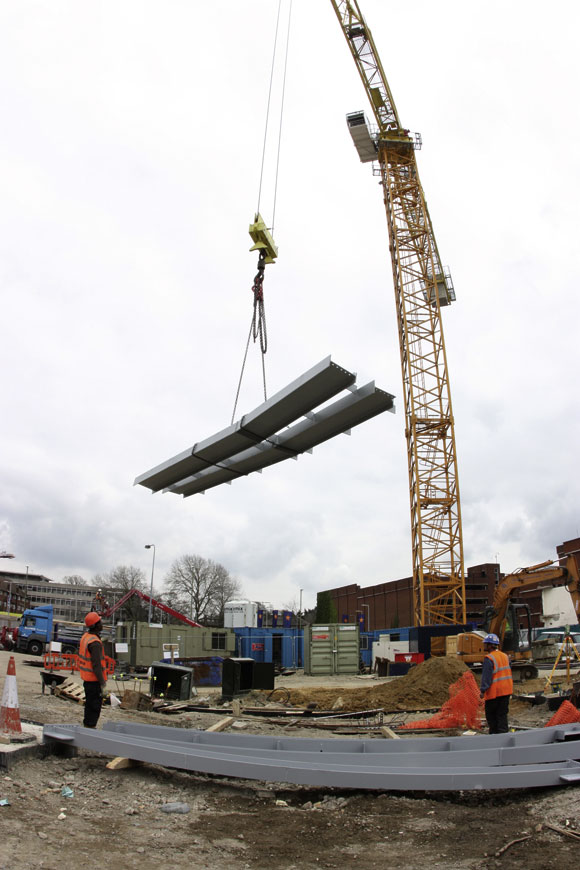 The entire development is scheduled for completion in 2010

Above the Sainsbury’s supermarket on two elevations are three levels of apartments meaning the side elevations of block 1 rise a further three floors to level 5. The project’s apartments are being constructed in a similar fashion to the hotel, with Metsec lightweight steel.

“Using lightweight cold rolled steel for the apartments keeps the weight down and negates the need for heavy transfer decks below,” explains Mr MacIver.

Abutting block 1, a further retail zone known as block 2 is also currently under construction. This steel framed structure will house more than 30 shops on two levels with a 69-space roof top car park above to serve the three levels of residential apartments wrapped around two elevations on block 1.

A further two blocks, numbers 3 and 4, are planned and are due to start later this year. Both of these phases will contain more retail units with upper levels of residential apartments. Block 3 will incorporate a rooftop car park and will be linked to block 2 via a steel footbridge.

A stand-alone steel framed multi-screen cinema complex is also planned to the south of blocks 2 and 3. Containing a ground level car park, with the main cinema and restaurant facilities above, this structure is also expected to begin later this year.