Time for action on investment 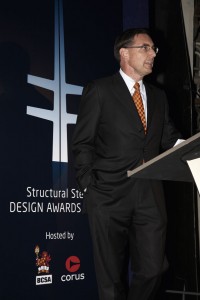 Corus Chief Executive Officer Kirby Adams has called on government to support construction by increasing infrastructure investment and bringing projects forward. Speaking at the Structural Steel Design Awards ceremony where he presented the awards Mr Adams said the time for government to act to help reverse the recent fall in demand for the industry’s products was now.

Mr Adams called on the audience to increase pressure on government to help reverse the decline. He said: “Corus has a voice in government as one of the construction industry’s biggest employers and so do you.

“We desperately need investment in infrastructure to be increased and brought forward. As in many developed countries, much of the UK’s infrastructure needs upgrading or replacing. Our towns and cities would benefit from greater spending on steel-intensive, environmentally beneficial initiatives such as urban transport. And we need a government strategy to enable this world-beating British steel fabrication industry to benefit as soon as possible from the expected investment explosion in renewable energy projects.”

Mr Adams said the advent of the Eurocodes opens up tremendous possibilities for the UK to export its steel design competence and increase the use of steel on the continent to levels similar to the UK, where the market share of steel in construction is the highest in the world, with over 70% of multi storey buildings for example framed in steel.

He said that one of the first things that struck him about construction when he took over as CEO earlier this year is the closely-knit steelwork supply chain, and this partnership was a key reason behind the UK having the most steel-intensive construction industry in the world.