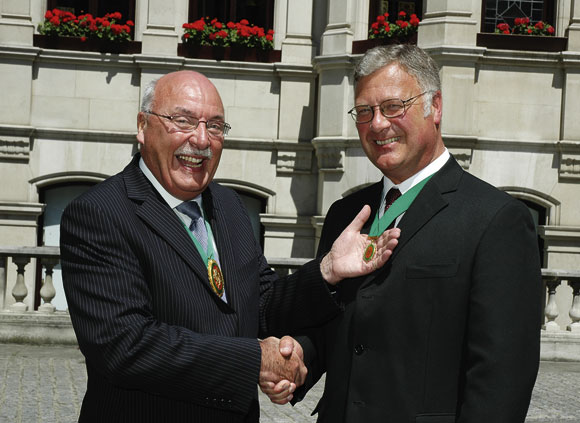 New BCSA President Jack Sanderson cut through the economic gloom surrounding construction with a prediction that association members will be well placed to respond quickly when recovery comes.

Speaking at BCSA’s Annual Lunch Mr Sanderson also announced a raft of new publications and technical and marketing initiatives being undertaken by the association alone and in partnership with Corus. He said: ”The underlying demand for steel construction remains strong and members are well placed to respond quickly to the recovery.

“I am pleased to report that BCSA is in good shape and, despite the difficult year ahead, I look forward to the future with confidence.” Health, education, power and infrastructure sectors were holding up, he said.

Mr Sanderson outlined a busy programme of work by BCSA to support regulatory as well as market changes. He announced publication of a new guide to the reasons for specifying a BCSA member or associate member. A new Guide in the Health & Safety series, for the Management of Site Lifting Operations, was announced.

BCSA’s website – www.SteelConstruction.org –  has been redesigned and the new site was launched on the day of the Annual Lunch. A new Guide to the Routes to CE Marking was launched and a CE Marking edition of the NSSS is currently in preparation, with a series of seminars introducing this publication planned for later this year.