The arc of Suffolk 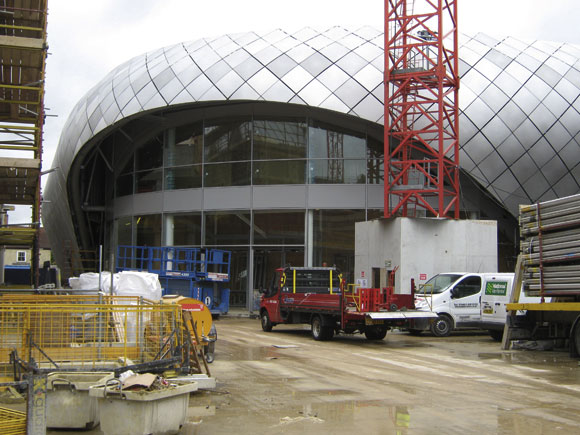 Looming large; the Debenhams store will anchor the development

The centrepiece of a Suffolk market town’s redevelopment is a visually stunning anchor store. NSC reports on a project that will extend Bury St Edmunds’ historic centre.

As department stores go they don’t come anymore striking than the new Debenhams in the Suffolk market town of Bury St Edmunds. Clad in distinctive aluminium rainscreen panels, the two-storey clam-shaped structure is the anchor store and focal point for a £100M retail, leisure and residential town centre development.

Located on a former cattle market site, the scheme covers an area of 24,620m² and will effectively extend the town’s medieval grid street pattern that was originally set out in the 11th century.

The cattle market, which was established in Victorian times, has now ceased activities and the local authority has seized the opportunity to extend the historic core of the town.

Masterplan architects Hopkins says, working with the town’s medieval grid structure and extending its series of linked public spaces we have broken down the site into a series of appropriately scaled buildings. Generally these buildings have cafes and shops at ground level with two stories of flats above.

As well as the Debenhams store the development also includes approximately 35 other retail units, 62 residential apartments, an auditorium, which has been designed as a modern day market hall, and 850 car parking spaces.

Debenhams will have three trading levels, a basement, ground floor and first floor. The structure also incorporates a roof top plant zone. The building is framed in steel, with Caunton Engineering fabricating, supplying and erecting approximately 650t of structural steel for the store. 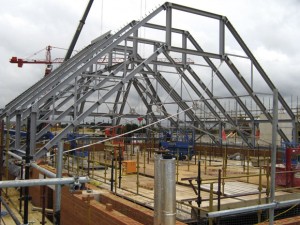 Caunton is working with Taylor Woodrow Construction as a Strategic Alliance Partner. “Coordination meetings began as early as the tender stage and proved to be of great benefit in solving problems with deliveries and logistics due to the tight site constraints,” says Allan Younger, Divisional Director for Caunton.

Prior to steelwork erection commencing in October 2007, a lengthy groundworks programme was necessary primarily to dig out the 6m deep basement. “The ground is generally chalk and excavation continued into the summer of 2007,” explains Mark Christian, Associate Director with WSP. “Once the basement was dug out, a raft foundation was constructed before the steelwork started to go up.”

Steelwork for the Debenhams store begins at the basement slab level and Caunton initially had to install eight sets of temporary bracing, for stability, while the structure was going up.

From the ground level Caunton erected a series of perimeter columns, which extend up to the structure’s roof top level, some 16m above the basement. Attached to these columns were the vertical ‘ribs’ of the structure which in turn are connected by a series of horizontal CHS sections. These outer members form the curved profile giving the building its unique shape. Internally, the main columns were themselves around 16m high.

“Erecting the columns wasn’t a problem as we had the use of three on-site tower cranes,” says Andrew Austin, Caunton’s Erection Manager. “But getting the columns on to site was challenging as the site is quite congested and the streets surrounding the job weren’t built for such long loads.”

Deliveries to site required some expert manoeuvring by the truck drivers. and as setting down areas were limited, most steel was erected the day it arrived to site.

The store’s position also had to tie into the overall historic grid pattern, which meant the structure’s position was predetermined and the steelwork grid lines had to fit this plan.

However, what emphasises the building’s distinct rounded shape are two arches which curve over two entrance lobbies at either end of the store. These arches are formed with curved 457mm diameter tubular sections which were brought to site in three separate pieces.

“The arches are three dimensional in shape and couldn’t be transported to site in one piece,” explains Mr Austin. “And the site was congested, so lifting a complete arch was impractical.”

As well as being architectural features which provide the structure with its unique shape, the arches also help support the cladding over the entrance areas.

In other areas the aluminium rainscreen cladding is fixed to the steelwork via curved galvanised members which have a 3D clamp attached. These clamps can move in three directions and consequently can hold individual panels in the required complicated position with the correct joint width.

Mr Christian says one of the main challenges of the project’s design process involved getting the coordinates correct for the perimeter steel to ensure that the architect’s cladding design could be achieved. “The walls also peel out in two places for loading bay,” he says.

Stability for the Debenhams store is provided by bracing located at roof level and in the structure’s six concrete cores.

The other steelwork element of the development is the roof of the scheme’s 500 seat auditorium. The building is a concrete/masonry structure and the roof consists of a series of lightweight steel trusses connected by stainless steel rod bracings. Each of the roof trusses were assembled on the ground and then lifted into position as one 2.5t piece.

Two 7t 20m long plate girders, which are supported on steel columns, support the precast balconies at one end. The long span of the plate girders was necessary to avoid any internal columns in the auditorium. The design of the girders also had to meet stringent vibration criteria.

Caunton estimates that approximately 70t of structural steelwork has been used in the auditorium. This not only includes the roof structure but also supports for handrails and first floor balconies.