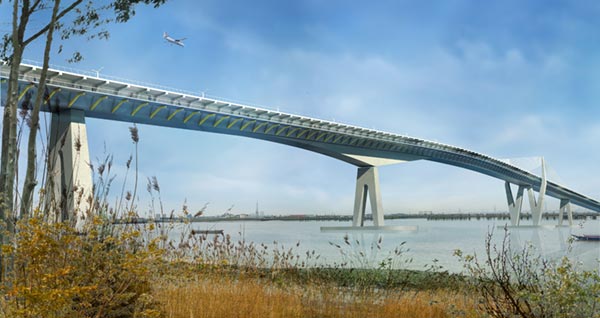 A proposed £600M Thames crossing linking Beckton and Thamesmead has been revealed by architect HOK and engineering consultancy Arup.

The concept called ‘Bridge East London’ would allow clear passage for ships and takes into account aircraft taking off or landing at City Airport.

According to the designers much of the deck, which supports a road and a segregated cycle path, could be constructed with steel.

Richard Gammon, HOK’s Global Director, Aviation & Transportation, said: “If the full potential of east London is to be harnessed and maximised to the benefit of our growing city, then we need to provide catalysts to enable that potential to flourish.”

Stephanos Samaras, Director at Arup aded: “London’s infrastructure is already under pressure and as the city’s population continues to grow it is more important than ever that we provide better accessibility and connectivity to integrate communities.”