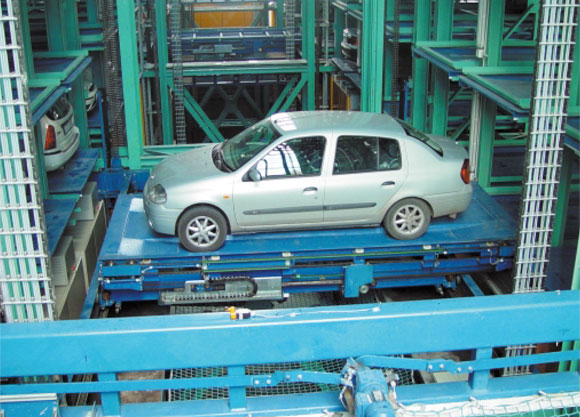 Automated pigeon-hole car stackers are a building type that has largely disappeared from Western cities. This is a new one, which uses full computer operation to overcome the problems of earlier examples. Zeynep Polat reports.

The building is located in Istanbul, which has a serious problem of insufficient car parking space. It is the first multi-storey fully automated car park building in Turkey. All the functions are controlled by computers and no people are allowed inside. The building has a capacity of 612 cars with 14 storeys above and 3 storeys below the ground and two entrance floors. The fully automatic car park system for the building was manufactured by Otto Wöhr GmbH in Stuttgart. 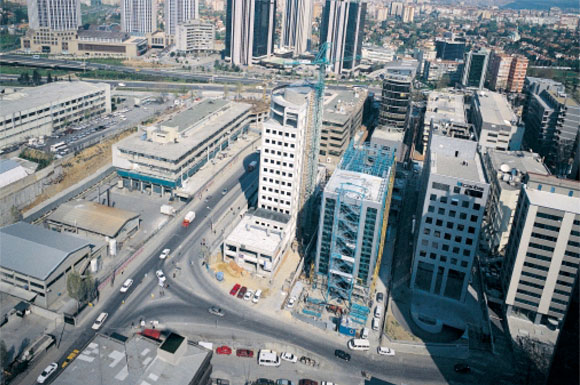 The building is located on a main street which is parallel to Buyukdere Road, one of the main radial roads of Istanbul. Therefore the car park serves a busy region containing many businesses and shopping centres. 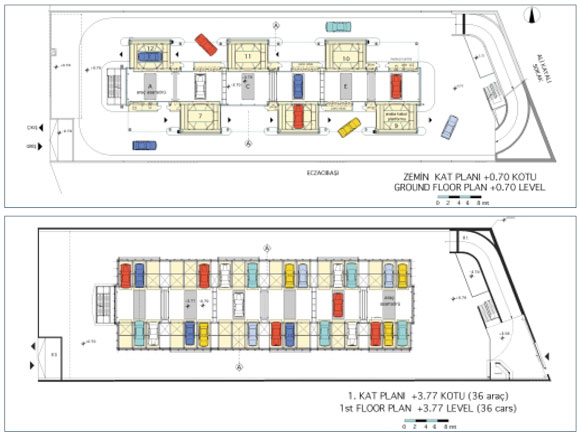 The architectural form of the building follows its function. It has a modular structure which was determined by the equipment inside the building. There are six structural modules each having 102 platforms on which cars are parked. These modules stand next to each other and together form the whole building.

Twelve cars can enter the building at the same time, six on each of the two access levels. Drivers leave them on rolling tables in the entrance units. Six elevators carry the cars automatically from there onto platforms located on the floors above. When customers return they collect their cars from the entrances where they left them.

The steelwork design and detailing was carried out in Germany by Walter & Reinhart Ing. Bureau and Bruhin+Enz Bureau. All of the drawings were made according to Turkish codes and regulations such as TS 648 The Regulations for calculating and constructing steel structures, Earthquake Regulations and TS 500 Standards.

The site was excavated in order to form the basement. The 60 cm thick walls were built on piles. The building has a steel structure fixed to a raft foundation. The total amount of steel used was 950 tons.

The reasons of choosing steel as the structural system for this building were:

The minimisation of the dead loads reduced the possible earthquake forces. And finally the dimensions of the steel shear wall system were also.

The wind-bracing connections are in front of the façades. They are perceived as elements of the façade rather than structural members. The transparent glass used on the façades allows the internal steel structure and the working of the building to be seen from the outside.

The building had to be extremely accurately fabricated and constructed in order for the machinery to work reliably. The project was more like constructing a machine than a building, as the tolerances had to be those required by the transporter lift system. All boring work, including holes for attaching the cladding, was carried out during the CNC fabrication of the steelwork.

The steel was finished with SA 2 sanding and protected with anti-corrosion paint. 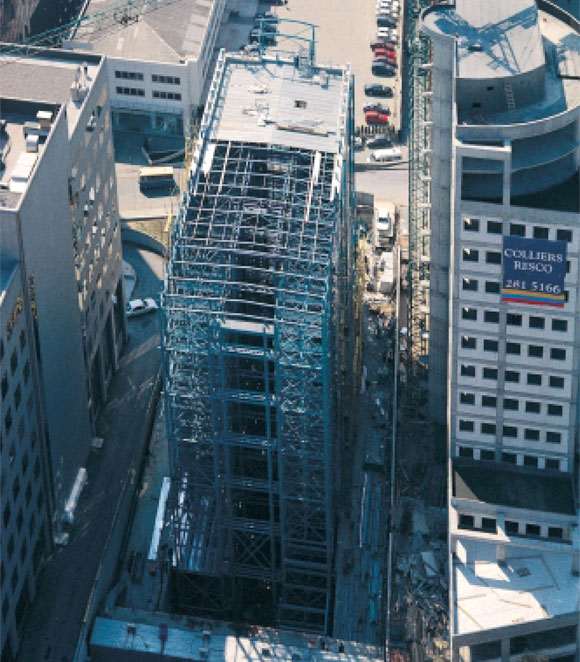 The building consists of six free-standing blocks that were erected one after another. After the completion of the steel structure of each block, the transporter lift, car entrance and exit rooms and equipment, facade covering, roofing, fire safety systems, ventilation and lighting equipment were added.

The whole steel structure, was anchored to the raft foundation with 232 anchoring points. The total height of the carpark is 45 meters.

After the completion of these stages for each block, the lift operation was tested. Very tight tolerances had to be attained to make it possible for the cars to be moved onto the platforms with automatic control. There is a tolerance of ±3 mm for this 53.65m long building.

Aluminium composite panels and tempered and laminated glass were used on the façades. These elements were connected by spiders to box profiles that were anchored onto the steel structure at 1.83m centres.