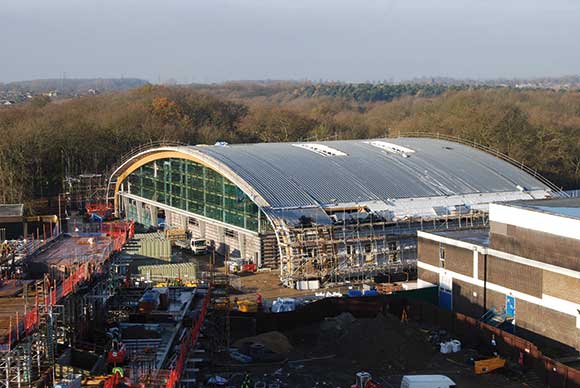 The pool will be the centrepiece of Corby’s regeneration.

The Northamptonshire town of Corby has some ambitious plans which include rebuilding and redesigning large areas of the town centre. Martin Cooper reports from one of the first projects to near completion, a new 50m Olympic sized swimming pool.

After more than twenty five years of depression, which began with the closure of the local steelworks, things are definitely looking up in Corby. During the last few years, there has been real impetus to redevelop and a number of high profile jobs are currently ongoing which will transform the Northamptonshire town.

It all began in 2003 when Corby, along with other towns in the area (Kettering, Wellingborough and Northampton) was designated as a major growth area in the MKSM SRS (Milton Keynes and South Midlands Sub-regional Strategy), which, among other things, meant accommodating 16,800 new homes by the year 2021.

Corby Borough Council has some grand plans, a new and revamped town centre is underway, a new train station – with direct services to London – will shortly open, a new civic centre is under construction and the town will have one of the UK’s few 50m-long Olympic sized swimming pools.

“It’s all about putting Corby on the map,” says Peter Griggs, Head of Special Projects for Corby Borough Council, explaining the decision to build only the second 50m pool in the East Midlands. “We have a lot of work currently underway and on the drawing board, the pool is an iconic structure and something the whole town will be proud of.” Officially titled the Corby East Midlands 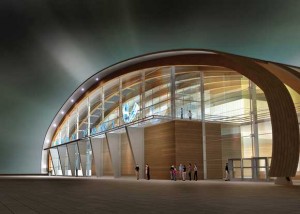 The facility has been shortlisted as a training venue for the 2012 Olympic Games.

International Swimming Pool, the project is a real symbol of the regeneration of the town centre. The original plans envisaged a 25m pool, but this was later revised and the fact that it has already been shortlisted as a training venue for the London 2012 Olympics, the decision to go for the larger pool has been vindicated.

“A number of residents were initially sceptical about the town’s plans,” says Councillor John McGhee. “But since work has got under way and the spectacular swimming pool building has become visible, people have really got behind the project.”

When it opens in June, the Corby pool will provide a 50m, eight lane main pool, national junior standard diving boards, a 20m learner pool, a fun pool with a flume, spectator seating for up to 400 people, health suite, a dance studio, a creche and a cafe.

The pool will be equipped with two sets of hydraulic barriers which can be raised to divide the pool into thirds when the full 50m length is not required. This will allow one sector for diving, another end for practice swimming and a central zone of 25m for short course racing.

Work on the project began earlier this year, on a site which is located adjacent to Corby’s existing 25m long swimming pool. The site was originally a surface car park and main contractor Willmott Dixon had to first excavate a basement level which meant digging down to a maximum depth of 6m. This task was not just to accommodate the pool itself, but also a system of air ducts that run beneath the pool, and pump rooms which are also located underground. 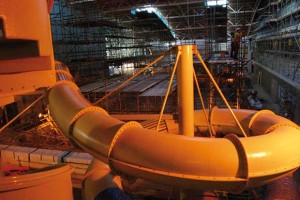 The pool includes a flume and fun area.

Covering the facility is a large curved steel framed structure which contains 410t of structural steelwork. However, the pool is formed with concrete and such is the depth of this material needed to accommodate the amount of water, there is actually more steel under the structure, as the concrete’s rebar amounts to some 500t.

Early works predominantly involved concrete, the pool was cast, the slab for the remainder of the ground floor was also installed. this meant once the steelwork was ready to be erected over the pool, it had to be installed from the perimeter of the structure’s footprint.

“We weren’t allowed to run cranes within the pool, so everything was erected by a combination of the on site tower crane and a mobile crane positioned beside the pool,” explains Andrew Aykroyd, Site Supervisor, Hambleton Steel Ltd.

Covering the pool area and forming the distinctive domed shape are a series of 32m long, 2.5m deep trusses. Spaced at 8m centres, the trusses were brought to site in two 16m sections. Lifting the trusses was one of the main challenges of the steelwork programme.

“Because the site is very confined we had nowhere to assemble the trusses on the ground, so we had to tandem lift them and then bolt them together in mid air,” says Mr Aykroyd.

The steel trusses are structurally integral to the entire structure as they support the roof. Spanning the pool structure length wise, 90 degrees to the trusses, are a series of 80m long glulam rafters. These architectural feature beams thread though the steel trusses and are bolted down at either end to concrete plinths. 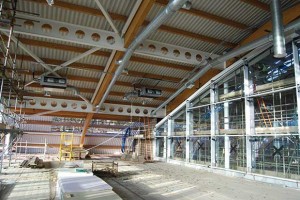 Cellular beams, which will remain exposed, have been used in the changing room areas as an architectural feature.

The glulam beams were too long to be brought to site in one section and they have been installed in a series of 8m long pieces. “We erected the timber rafters and purlins along with the steelwork, it made the programme easier,” says Mr Aykroyd. “During the design process it was very challenging however, as we had to design connections to timber as well as the glazing.”

Other notable steelwork includes the building’s bracing, which is concentrated in lift and stair cores and has also been secreted along the structure’s ends.

“The structure is basically a braced frame, and once the design had changed to a 50m pool we reinstated the steel profile by designing the steel trusses to be structurally integral,” explains Bill Duke, Associate Director for WYG Design.

On one side of the pool the building features a terrace viewing gallery and opposite there is a two- storey changing room block. Cellular beams, mostly 800mm deep, have been used extensively in these areas.

“Most of the beams in the roof will be left exposed and so the design opted for cellular beams for appearance,” explains Mr Duke. “Although some have been used at floor levels where there are service considerations.”

Corby’s swimming pool is scheduled to open on 29 June 2009 and Chris Stephenson, Corby Borough Council’s Head of Service, says the town’s decision to bite the bullet and go for an Olympic sized facility has been fully justified.

“The pool will help improve the town’s wellbeing, create jobs and, importantly, it looks great – the design is first class.”