Swansea’s park and ride gets an iconic bridge 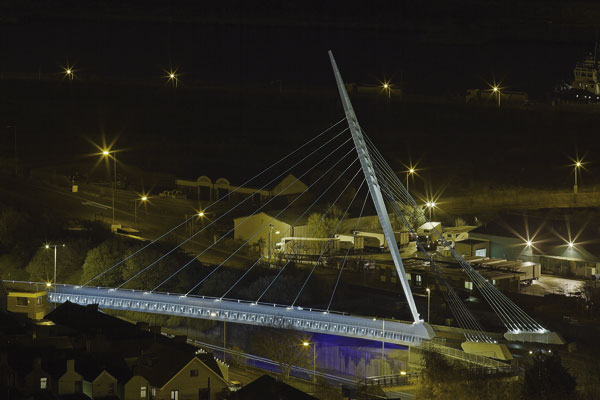 The city of Swansea has added an eye-catching bridge structure to its skyline. Known as the Sidings Bridge, it primarily carries an express bus route from an out-of-town park and ride facility over the busy A483 and into the city centre.

Officially opened late last year, the steel bridge has a 71m span at a skew angle of 65 degrees. Steel fabrication and erection was done by Rowecord Engineering and it extensively made use of off-site prefabrication of the bridge deck to minimise the number of required road closures.

The structure was installed in two possessions over successive weekends. The first pos- session was used to install the spine beams and four corner deck units over the abutments.

After the trimmer beams were welded to the spine beam, the second possession was used to install the remaining larger deck units. The spine beam was supported on a temporary trestle at mid-span until the stays were tensioned.