Steelwork ready for the Derby 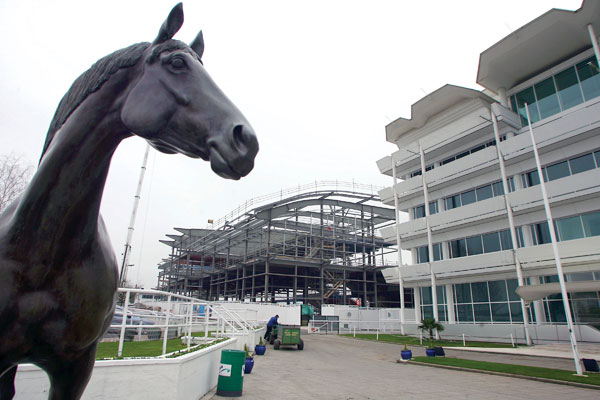 Work is currently progressing on schedule for the £25M redevelopment of the Epsom Downs Racecourse. The centrepiece of the project is a new 11,000 capacity grandstand which will be partially opened for this June’s Derby Festival.

Measuring approximately 95m-long and with a height of 22m, the new grandstand replaces a 70-year structure which was demolished last year.

The grandstand will include a large 960m² hall with catering outlets suitable for conferences and exhibitions. On the upper second level there will also be 14 private boxes and ‘Super Box’ catering for more than 100 people.

Working on behalf of main contractor Willmott Dixon, Graham Wood Structural is erecting approximately 800t of steelwork for the project.

Having erected the majority of the grandstand’s steelwork, Graham Wood will finish its work by adding the large cantilever roof steelwork.

“We have to wait until the precast concrete terracing is installed before we put the cantilever up,” said Paul Westbrook, Project Manager for Graham Wood.

Steelwork will be completed by the end of May, allowing spectators to use the 4,000 capacity terrace area of the grandstand for the Derby Festival. Once the race meeting is over the upper levels of the facility and external works will then be completed.