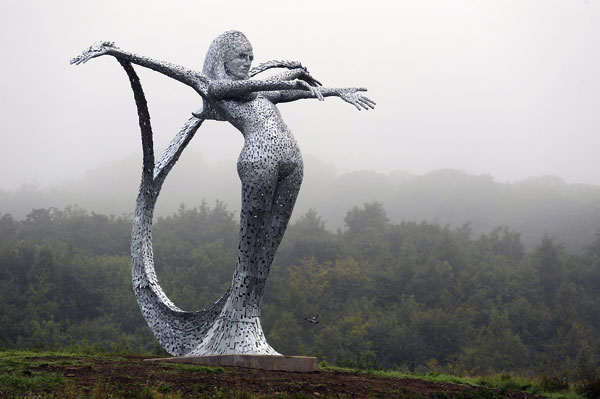 A 10m-high steel sculpture of a female form has been erected on a hill overlooking the Scottish new town of Cumbernauld.

Named Arria, after Arria Fadilla the mother of Roman Emperor Antoninus on whose orders the nearby Antonine Roman wall and fortifications where built, stands adjacent to the A80 truck road.

Its proximity to the highway means more than 70,000 commuters will see the sculpture every day.

International public artist Andy Scott took nearly a year to make the iconic sculpture. Prior to the erection and unveiling, the sculpture was split into 15 sections to allow it to be galvanized.

Mr Scott said: “Galvanizing was the last off-site fabrication stage and finalised the aesthetic appearance. As well as the obvious protective purpose, it also brings the sculpture to life.”