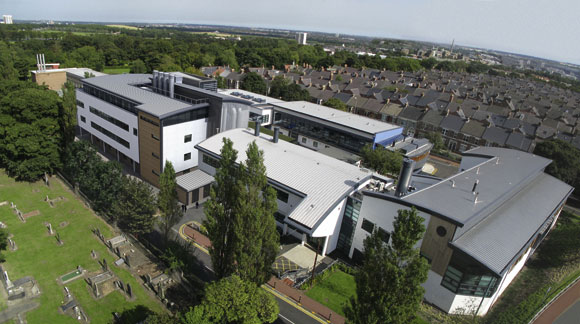 The latest structure at Newcastle’s state-of-the-art medical research campus is another steel-framed building. Steel has proven to be the material of choice for the entire site’s ongoing construction programme, reports NSC.

Work is being undertaken at Newcastle General Hospital to create a world class campus dedicated to health and ageing research. The project has been steadily evolving over the last few years and the latest development, the new steel framed Biomedical Research Centre building, will sit between and link into two existing steel buildings – the Henry Wellcome  Biogerontology Building and the Clinical Ageing Research Unit.

According to the client – Newcastle University – the location of the new building will help foster collaborative working, promote R&D opportunities and attract commercial organisations to the site. The Biomedical Research Centre will facilitate research into the underlying biological processes of ageing and improve the understanding and diagnosis of older patients with multiple medical conditions. The building will also provide patient care facilities as well as specialist teaching accommodation, research and incubator space. 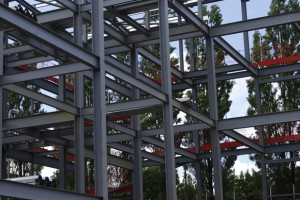 The building’s steelwork is based around a regular grid pattern

The site of the new building was previously used as a car park and once finished the structure will form the final piece of the jigsaw by completing a square of research buildings around a courtyard.

Main contractor ISG has been on site since April 2009 and as well as ripping up the asphalt car park, early works included grouting up old coal mine workings. The entire site was initially riddled with coal workings, approximately 10m below the surface. These had to be sealed up with concrete before pad foundations were installed to accept the structural steelwork for the building’s frame.

“The other recently built structures on the site are all steel-framed because of the need for a lightweight frame, this was one of the main factors in going for a steel solution again,” says Stuart Isley, Cundall Project Engineer. “As well as the speed and cost of construction.”

Although the new building links into other buildings, it is essentially a stand-alone structure deriving all of its own stability from internal vertical bracing.

“It abuts two existing buildings and links into them at ground and first floor levels,” adds Mr Isley. “But there are movement joints separating the structures.”

Steelwork’s flexibility has come to the fore with the design of the grid pattern. Although the frame is predominantly based around a 5.1m × 7.2m grid, there are slight variations on this, especially for the roof top plant areas. Structurally the ground floor keeps to the grid and will eventually house consulting rooms, the upper levels will accommodate laboratories, with some of these of varying sizes, and consequently requiring a grid pattern change. 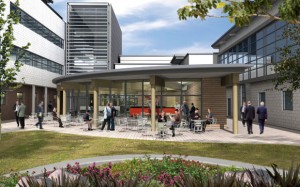 Another area where the grid pattern alters is the glazed foyer that connects the structure to the Wellcome building. The foyer is fully glazed on two sides and contains an entrance hall and reception area. Extending upwards to the full height of the structure, it imposes itself architecturally and creates a signpost into the structure.

Steelwork fabrication, supply and erection is being undertaken by EvadX, and it completed the majority of the main frame of the structure during September.

“The site is very tight and the completed structure takes up the majority of the site which made delivering steel quite challenging,” comments Steve Morris, EvadX Project Manager. “We had to phase the steelwork into erectable lots and these were delivered to site in sequence. Most of the steel was then erected almost immediately as there was little or no room for lay-down or storage.”

Prior to anything being delivered to site, including steelwork, ISG have to notify the client, as the adjoining buildings are all occupied and contain some sensitive equipment such as MRI scanners. Convenient time slots are then allocated for material deliveries when the aforementioned equipment is not being used.

The majority of the steelwork columns have been brought to site in full 16m lengths, with only a few – those that extend up to the rooftop plant area – requiring a splice, at third floor level. Anything longer than 16m was deemed to be too long for the tight site.

Along the internal perimeter of the structure a row of CHS columns have been erected to create a colonnade effect around the internal courtyard, which is created by the completed new building.

Within this courtyard a single storey glazed pavilion building, featuring a green sedum roof will be constructed. EvadX will erect this structure which consists of steel columns and support beams, with stainless steel bracing and glulam beams supporting the roof.

The pavilion will house a cafe and forms part of ISG’s externals package which also includes seating areas around the cafe and general landscaping. ISG will also carry out a minor refurbishment across part of the adjacent ground floor of the Henry Wellcome building.

Summing up the project, which is scheduled for completion next summer, John Gittens, ISG’s Regional Director, said: “The new Biomedical Research Centre represents a major investment by the University into facilities that will not only benefit students and patients, but also places Newcastle at the heart of the global developments of pioneering new treatments and research into the ageing process.” 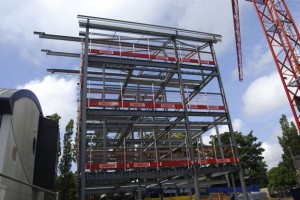 All stability is derived from vertical bracing 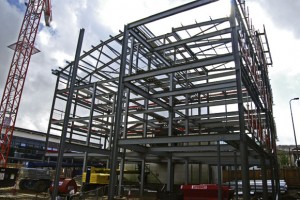