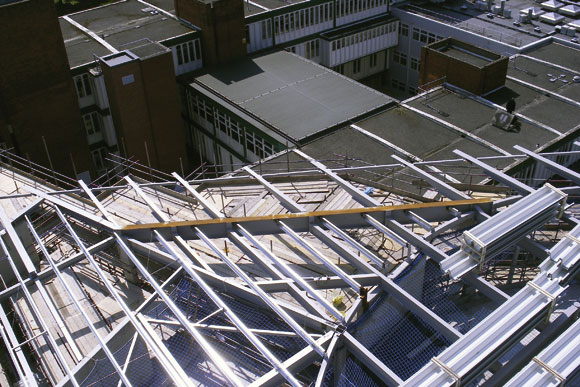 A highly visual and architecturally driven steel roof structure is the crowning glory of a multi-million pound college redevelopment in south London.

South London’s Lambeth College has embarked on its first phase of the redevelopment programme for its existing estate. This involves the construction of a new £14M sixth form building and entrance structure at the Clapham Centre.

The project began in early 2007 and will provide state-of-the-art teaching accommodation and a performing arts facility in an eye-catching and imposing five storey structure.

Main contractor Osborne won a design and build contract in late 2006 and started on site in March 2007. The initial work involved demolishing an existing 1960s two-storey administration block and an auditorium. This cleared the ground for the construction of the new 6,350m² structure to begin.

The new building consists of a post tensioned concrete structure up to the fourth level, above this the uppermost [fifth] level is formed by and topped with a complex and challenging steel roof structure.

The roof is curved and wraps around the building on two elevations, north and south. It also slopes inwards towards a central gutter line.

“It’s a highly architecturally driven roof which folds around the structure and supports the walls and cladding,” explains Peter Russell, Osborne’s Construction Manager. “The two pitches of the roof, either side of the gutter line, are also different, adding to the overall complexity.”

The project’s design team chose steel for the roof structure because of the complex shape and structural engineer Faber Maunsell and steelwork contractor Allslade had a number of meetings to finalise the challenging geometry. 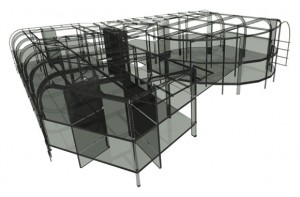 Computer generated image showing the complex nature of the steelwork 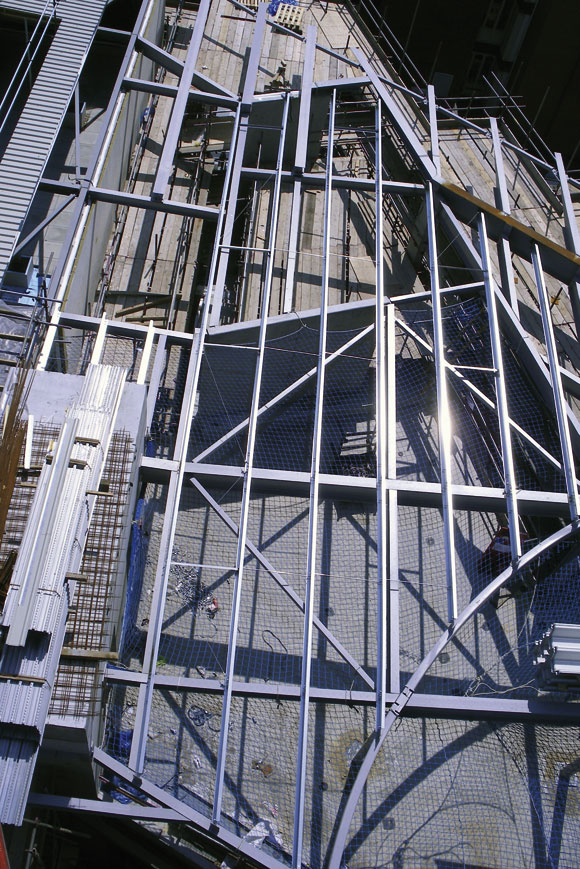 Architecturally sensitive bracing connections were needed for the roof’s steelwork 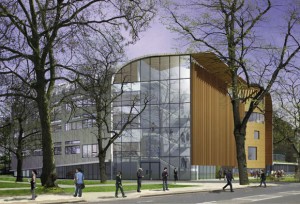 Impression of the completed college building and its glazed atrium

Between the two project team members a number of 3D computer generated models were made to help visualise the structure. Allslade then generated its own 3D model using design team drawings, which helped work out the geometry in the most complex areas.

“The upper part of the project is more organic in steel,” comments Gary Chesher, Faber Maunsell Regional Director. “The design and construction of the roof probably wouldn’t have been possible without computer design packages and the use of steelwork.”

Chris Gatehouse, Allslade’s project Draughtsman, agrees and says: “In terms of design, the project as a whole was challenging, particularly the roof.”

The roof structure was primarily formed with curved eaves rafters which carry a cladding system supported on purlins, this then continues over the radius from the vertical cladding to form the roof.

Precambered 686 x 254 x 140 beams support 4m tapered cantilever roof members. “The tapers for these members were developed by us using cladding details,” explains Mr Gatehouse. “The taper angle had to continue over the eaves radius, which was made more difficult as the gable line also tapered in plan.”

The upper part of the structure also needed architecturally sensitive bracing connections for the steelwork. The bracing for the roof structure also transfers the wind loads down to the fourth level of the building.

“The shape of the structure basically dictated the roof design and so there is no vertical bracing and only horizontal bracing,” says Mr Chesher. “The roof on the east elevation overhangs to deal with wind uplift, the depth of the steel members had to be slender but robust to deal with this and required a complicated model during the design stage.”

The roof structure is also formed with eliptical rafters and cantilever bracing members to the gable ends. The cantilevers of the roof also required moment connections and thermal packs, as these steel to steel areas are outside of the vapour barrier and needed to be thermally isolated.

Within the roof there is an open area known as ‘The Artists’ Garden’ and this is intended to be a student breakout and learning area for 16-18 year olds studying creative art. Below this area there is a structure high atrium – clad with glass – which is supported by a lightweight steel facade within the overall concrete form.

This curved area was formed with perimeter 250 x 150 x 10 RHS members, which also follow the four degree pitch of the roof. Here there are many steel to concrete connections and these had to be fixed within the 30mm wall finishes.

The atrium has two steel link bridges, one at third floor level and another at the first floor which is suspended from above by Macalloy bars.

Allslade finished its steelwork erection programme earlier this year and Osborne’s work will be completed in March 2009, with the college facility opening for the following autumn term.

Commenting on the overall scope of the works, Mr Russell says a major challenge has been working in a college which has remained open throughout the works programme. “At the back of the site, the main college facility is open and the main entrance runs right through our working area,” he says.

Osborne has constructed a temporary roof over the entrance allowing students safe access and ingress to the college, while a new steel framed entrance foyer has now been completed. The new entrance will link directly into the new structure and allows for later redevelopment of the remaining old college buildings.

Another challenge for the main contractor has been the variety of different materials being used on site. “It’s a very tight envelope and we are using steel, concrete and for cladding, render, brick, timber Brie Soleil and zinc,” concludes Mr Russell.