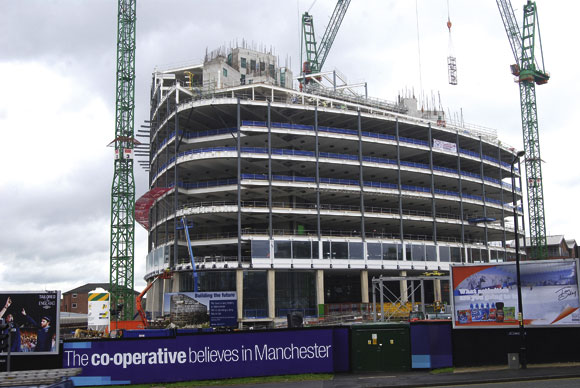 Structural steelwork is playing a leading role in the construction of The Co-operative Group’s new eye-catching headquarters in Manchester. Martin Cooper reports.

Founded in 1863, the Co-operative Group has always had its headquarters in Manchester and is intrinsically linked with the city. Born and raised a Mancunian business, the company is now endeavoring to continue its commercial contribution to city life by constructing a brand new 16-storey headquarters.

The building represents the first phase in the redevelopment and regeneration of the Group’s 20-acre site, located at the city’s northern gateway and bounded by Miller Street and Corporation Street. The structure will include around 30,000m² of open plan office space, providing modern working facilities for the Co-op’s staff.

The client wants the project to be a sustainable landmark by becoming the first building in Manchester to achieve a BREEAM ‘Outstanding’ rating and so becoming a benchmark for the commercial sector. Making a positive impression on its immediate vicinity, the new head office will have its own source of locally generated green energy and staff will be encouraged to make full use of local transport as on-site parking will be minimal.

Architecturally, the structure is far from being run-of-the-mill, standing out among its rather sombre looking city centre neighbours. Its footprint is a triangle with three rounded corners, giving the building a guitar plectrum shape. Each of the corners has a core, two of which rise up to level 11, with the third core extending up to the penultimate level 15. The building’s overall architectural orientation is completed by its sloping upper levels. From the ninth floor the levels step back and are terraced, topping out at the 16th floor core area. 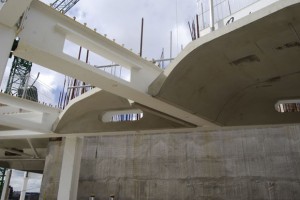 Fisher has installed bespoke coffers between the steel beams

The centre of the building is hollow, as a large triangular atrium extends from ground floor all the way up to a sloping roof, a glazed structure that follows the line of the ninth floor to 16th floor terracing.

“It’s very much a bespoke design chosen to achieve the highest BREEAM rating, with the large atrium allowing natural daylight to penetrate the floorplates and an exposed soffit maximising the thermal mass,” says Paul Richardson, Buro Happold Project Engineer. “Steel was the natural choice for the framing material as it gives us the required large column free floors levels and the option for future flexibility with the building.”

Forming the building’s frame, structural steelwork is also playing an integral and leading role in the project’s construction. The building has been divided into three phases, each based around one of the structure’s cores. In order to minimise time and costs, the construction team are working around the structure phase by phase erecting and installing the floors three at a time.

“Steelwork leads the way and plays a crucial role on this project, as once it is erected in one phase, the erection gang then moves onto the next phase, leaving behind a frame ready for the precast coffer beams to be installed. Once the beams are in the structural topping is laid by another contractor and in this way the three initial trades – being lead by the steelwork – are completing a different phase concurrently,” explains Nick Wilde, BAM Construction, Senior Site Manager.

Working in this sequential manner means that once steelwork has been erected for the third phase, the floors have been completed on phase one allowing the steelwork gang to use the concrete deck to position its Mobile Elevated Work Platform (MEWP) to erect the next three levels.

“The splice levels – on every third level – are the project’s critical paths,” adds Mr Wilde. “We are working to extremely tight tolerances and much of the steelwork and precast coffers will be left exposed as architectural features.” 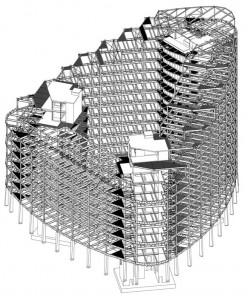 Steelwork was initially erected for the ground floor, which is a double height space, thereon in each circuit of the building consisted of erecting three complete floor levels. As part of steelwork contractor Fisher Engineering’s contract, the ground floor perimeter columns – large tapering concrete members – were erected by the company along with the steelwork.

Once a phase of steelwork is up, architectural precast coffers are installed. These coffers will remain exposed and rest on the bottom flange of 16.5m-long plated steel beams. The structure will be heavily serviced, and the coffers have an opening for service cables as do most of the projects steel beams. Fisher has erected close to 2,000t of Fabsec cellular plated beams on this project, used not just for their service holes but also to achieve a shallow floor depth.

The third of the initial trades participating in the project’s three phase sequence is the contractor laying the structural topping on top of the coffers.

“There is a weight restriction once we start erecting steelwork, using the recently completed floor to land our machinery on,” says Pat McLauglin, Fisher Engineering Site Manager. “As well as using tower cranes (each of the three phases is serviced by its own tower crane) we are making use of spider access machines as they distribute their weight more evenly.”

As each of the three cores provide the majority of the structural stability, steel erection begins for each phase with the connections to the concrete cores. “The completed cores have cast-in plates in readiness for the steelwork, but we have to survey and check each bracket to make sure the connection is exact, as there is no margin for error,” adds Mr McLaughlin.

Fisher has installed temporary bracing and trusses, which extend across an entire phase. These large pieces of steelwork are used on all of the floors and are moved, once the floors are complete, from phase to phase.

To create the three architecturally important rounded corners, or bullnoses, Fisher has installed a series of curved Fabsec beams at all splice levels. Each of the three elevations are also rounded, both vertically and horizontally and this will be formed by an outer double skin facade.

Predominantly glazed, the outer skin is attached to brackets fixed to the main steelwork. This secondary bracketry is of varying lengths and follows the line of the outer skin as it curves out and then in along and up the elevations.

The Co-operative Group headquarters is due for completion by September 2012. 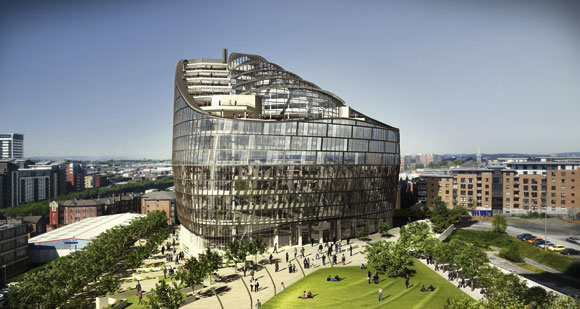