Spurs’ new training facility will be ready next summer

Training facilities for all top professional sports teams have improved immeasurably over the last couple of decades, and no more so than in the world of football.Top English Premiership and Championship sides now have training grounds that are the envy of world football. Cash rich with sponsorship and TV money, clubs have been busy investing in state-of-the-art facilities that include indoor pitches, gyms, swimming pools; everything a modern professional footballer would need.

Currently under construction in Enfield, north London is a new training facility for Tottenham Hotspur. Described as an example in cutting edge design, engineering and construction techniques, the club will move into the completed centre next Summer.

It will include a two-storey training centre designed around a 70m x 50m indoor artificial pitch which will be housed beneath a transparent ETFE roof, similar to the one at the Eden project in Cornwall.

The main two level L-shaped building will have a green sedum roof and accommodate a learning centre for the youth team, medical facilities, a hydrotherapy swimming pool, altitude room, fitness centre/gym, changing rooms, a canteen and a media centre. 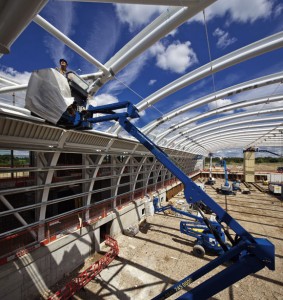 Last month, (September) the project reached a major landmark in the construction programme when a topping out ceremony was held.

Kevin Taylor, Chairman of the McLaren Group comments: “The project is set to be testament to what can be achieved through a shared vision, innovation and practical collaboration at every stage of the job.

“We are immensely proud of this development and delighted to mark this point in the project.”

Steelwork erection has been completed, and the material has played a pivotal role in the overall success of the project. The main covered indoor pitch is formed by a series of slender CHS trusses, that were brought to site in three transportable sections.

Watson Steel Structrures used an innovative method in order to erect these long trusses in a quick and easy way. Using two sets of containers with a grillage of temporary steelwork to initially support the three truss sections, they were then individually jacked into position and welded up.

“Only when all five splices were welded could we de-jack the truss and start the procedure on the next one,” says Jeff Matthews, Watson Steel Structures Contracts Manager.

Steelwork also forms the upper or second floor level of the L-shaped building that partially wraps around the indoor pitch. Below this level the building consists of a reinforced concrete frame, which also forms a basement level that is two-levels deep in places.

“There were planning constraints and the building could only be a certain height,” explains Dan Brister, McLaren Construction Senior Project Manager. “So we had to position the swimming pool and gym in the area where the basement is two-levels deep.”

McLaren Construction is scheduled to complete its work in May 2012, and Tottenham Hotpsur are planning to use the new facility in preparation for the 2012/13 football season. 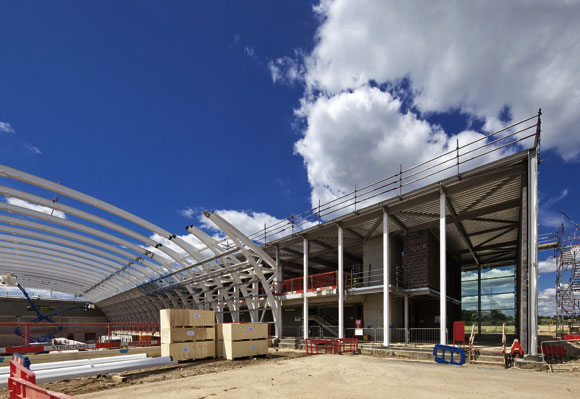