Steel in Fire: the latest news 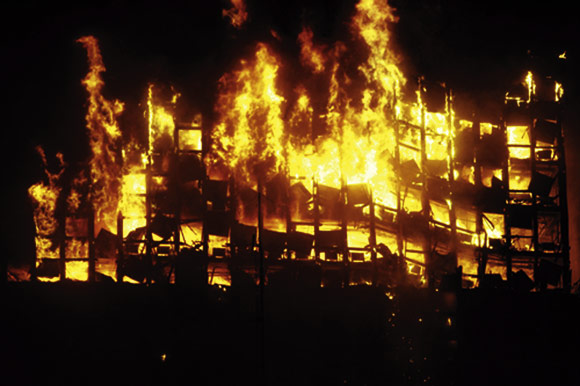 View of Madrid fire from the East side. This appears to show that part of the floor had collapsed internally although the perimeter columns are still intact at this stage

The performance of steel in fire has been proven through comprehensive tests worldwide. In the first of a series of fire engineering articles John Dowling of Corus Construction and Industrial assesses the impact of recent real life events on our knowledge of how steel behaves in fire.

Two recent events have focused attention on the performance of steel structures in fire.

The first of these is the publication of the draft official report from the National Institute of Standards and Technology (NIST) in the United States into the collapse of the World Trade Centre towers in September 2001; and the second is a fire at the Windsor Torre Building in Madrid in February 2005. Both events have excited considerable comment, in the latter case, a great deal of it speculative.

The official NIST report is the latest in a wide ranging series from that organisation and pulls together thirty recommendations on changes to existing practice and future research. The report pulls no punches in laying the blame for the collapses. The executive summary states that: “The WTC towers likely would not have collapsed under the combined effects of aircraft impact damage and extensive multifloor fires if the thermal insulation had not been widely dislodged by impact.” This had been suspected for some time and supports an opinion previously expressed by NIST in their building performance report, that: “The structural damage sustained by each of the two buildings as a result of the terrorist attacks was massive. The fact that the structures were able to sustain this level of damage and remain standing for an extended period of time is remarkable, and is the reason that most of the building’s occupants were able to evacuate safely.” 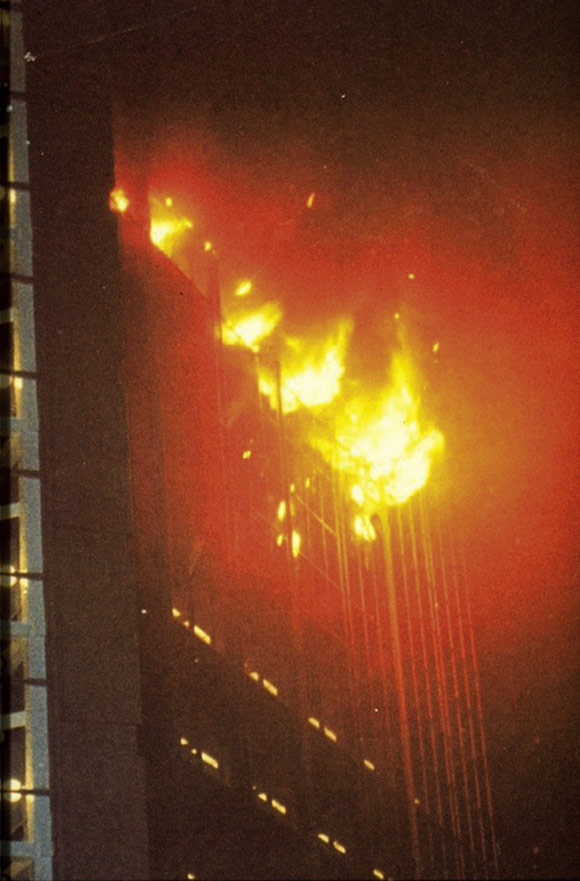 The Mercantile Credit Building on fire in Basingstoke 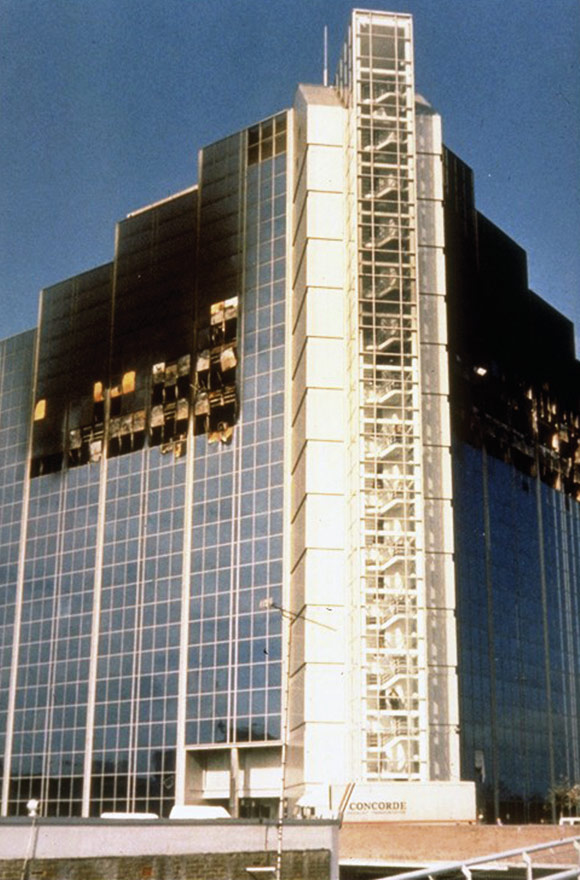 The findings of the draft NIST report into the WTC collapses will be discussed in detail in a later article in New Steel Construction. The issue of stickability of fire protection has already been addressed however by two UK fire protection manufacturers, Leigh’s Paints and Cafco International who have carried out explosion tests at the Advantica facility at Spadeadam in Cumbria. In all the tests, the protection retained its integrity and survived subsequent fire testing.

Large fires in modern office buildings are rare events and are often the subject of intensive investigation, especially when things go wrong. In such cases they can often act as the catalyst for changes to regulations and practice. What cannot be denied is that, in the Madrid fire, something went seriously wrong. Part of the building from the 17th floor upwards collapsed.

This fire has been the subject of intensive press speculation as to the chain of events and the nature of the structural frame. Against that background it is informative to read this summary of an investigation carried out by Arup Fire.*

“The building had a concrete central core with two rows of reinforced concrete columns aligned with the core side walls. The structure above ground was characterised by two transition floors at 3rd and 17th floor levels. The typical floor slab construction was reinforced concrete bi-directional ribbed slabs, spanning onto composite steel beams. The slabs were supported along the perimeter by steel columns, supplemented by RC columns on two sides below 17th floor level.

The transition floors were formed with solid RC slabs and deep beams. The original facade mullions and transoms were fixed to the steel perimeter columns, and a new facade structure had been added to outside of old facade. The perimeter columns in turn were supported by the transition structures at 3rd and 17th floor levels.

The Madrid regional code does not require sprinkler protection for buildings with an evacuation height of less than 100m so active measures were limited to automatic detection and alarm, fire hose reels and a dry riser system.

The exact state of the passive measures in place is not known but it would appear that  the precautions included an unspecified fire resistance period for the concrete structure and steel columns which were protected below the 17th floor and unprotected above that level. [Note from the author: the reason why the steel columns above the 17th floor were not protected is unknown at this time. In the UK, they certainly would have been protected.]

The first alarm was raised at just after 11pm. By about 1.15am the fire had spread to most of the floors above the floor of origin, the 21st, resulting in a 10-storey blaze. Soon afterwards the first chunks of facade started falling off, taking the perimeter bay of the RC slab with it in places. The spread of fire downwards to the remainder of the building was gradual at first, probably due to burning embers dropping through services penetrations, through slab edge openings and through other openings in the concrete slabs caused by core wall expansion.

The fire led to the collapse of virtually all the slab edge bay above 17th floor as well as one internal bay on the north side due, it would appear to the failure of the supporting columns. The transition floor resisted the impact of the partial collapses. Below this level there was substantial structural damage and deformation, but no significant collapse. What is clear is that the concrete perimeter slab could evidently not remain in the place without the support of the steel perimeter and concrete internal columns..

The reason the collapse of one internal bay on the North side supported by concrete columns is not immediately apparent but could be attributable to any of a number of factors: less concrete cover, more intense heat exposure, and the increased likelihood of concrete spalling this would create and/or momentum of adjacent bay collapse, amongst others.

The reduced damage below the 17th floor can be attributed to a function of the more robust structure below this level, the existence of fire protection and a less intense fire due to the more gradual fire spread.

In summary, where the steel frame was fire protected, it survived a complete burnout. Where the columns were not protected, they collapsed, together with some internal concrete columns. This supports evidence from a number of major fires, including the Churchill Plaza fire in Basingstoke, where a protected steel frame survived complete burnout on two floors with little or no structural damage. It also supports the results of the steel construction sectors’ own tests.

Over the past twenty years, the sector has conducted a comprehensive programme of testing, research and development on its products in fire far beyond that to which any other framing material has been subjected.  This was begun by Corus who carried out over a hundred fire tests on individual beams and columns, and was completed with the Cardington fire tests, a series of seven tests carried out (with the Building Research Establishment) on an eight storey, composite metal deck building between 1994 and 2003. In addition to these, extensive tests on large scale structures were also carried out in Australia, Germany and France. These all added to our knowledge of steel in fire, allowing accurate judgments to be made of failure temperatures and improving our understanding of the role of loading, restraint and thermal deformation in structural behaviour. They also demonstrated that the behaviour of steel in restrained  frames is much better than is suggested by tests on single elements of construction, a fact on which UK construction is now beginning to capitalise in its use of advanced structural fire engineering.

This commitment to fire testing extends to new products and variations on existing products. They are all extensively tested. Fire is too serious an issue to rely on broad based assumptions of performance based on similarities with other forms of construction. It is a core principle of the way that the sector operates that all claims regarding fire resistance are extensively supported by testing.

This testing and development of knowledge has been instrumental in diminishing the old concerns which some in the construction industry at one time expressed about steel in fire. It has been a key factor in the year on year increase in the use of steel in multi-storey construction, a rise which has created a virtuous circle as more and more manufacturers of fire protection materials have been tempted into the market. This has created pressure to push down prices, which has improved the economic benefits of steel in construction, which has increased the market share, and so on. The UK steel construction market is now served by a large number of efficient fire protection manufacturers which is one reason why the costs of fire protection are estimated to be less than 30% of what they were in real terms twenty years ago.

* ”The full document can be found at www.arup.com. Views and opinions expressed by the author of this article are not necessarily those of Arup, although text taken from the Arup report is reproduced with permission.”