Fast lightweight construction is the order of the day for a new college project in the Highlands. Martin Cooper reports from the initial project for the ambitious Inverness Campus scheme.

One of the largest developments to take place in the north of Scotland for many years is under way in Inverness. Described by Highlands and Islands Enterprise (HIE) – the Government quango responsible for local commerce and development – as a once in a lifetime opportunity, the Inverness Campus could generate around £38M for the regional economy each year and provide work for more than 6,000 people.

Overall the scheme is split into three phases (see box top of p19), with the initial part of the work centred on a new home for Inverness College.

One of 13 colleges and research institutions that make up the University of the Highlands and Islands, the new premises will allow Inverness College UHI to vacate its old buildings and take possession of state-of-the-art facilities.

Located in the centre of the first phase, the new college building will act as a focal point for the entire Campus as it is by far the largest single structure in the development.

Spread over three-storeys, the completed building will offer more than 20,000m² of teaching and workshop space for some 6,500 students. 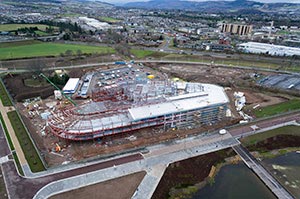 The largest project within the Inverness Campus takes shape

The building uses the diaphragm of the floor plate to transfer horizontal loading from the steel frame to the six braced steel cores. Where required, cross bracing has been provided within partition walls to give additional stability.

“The steelwork supports steel decking and we went for this composite design as it was considered to be the quickest and lightest solution,” says David Trahar, Struer Project Director.

The weight of the structural frame was an important consideration, not just because it would be more cost-effective, but also because its lighter weight meant that pad foundations could be used and piling avoided.

A standard 6m grid pattern has been used throughout the structure with only a few areas needing to have a variation. The unorthodox shape of the building – it is roughly kidney-shaped with the addition of one long straight elevation – meant a lot of time was taken with the setting of column lines, particularly around the structure’s corners.

“It is a difficult shape and we had to pass the structural model back and forth between ourselves and the engineer in a BIM (Building Information Modelling) exercise, in order to get it right,” explains Stephen Kelly, BHC Drawing Office Manager.

Using BIM also made the steel frame’s design cost-efficient as cellular beams have only been used where needed for service integration. The BIM model quickly showed where these areas were, an exercise that helped save money.

Craig Paterson, Miller Construction Project Director agrees: “The geometry is complex and using BIM ensured the steel frame was as flexible and as cost-effective as possible.”

The project does have some long spans such as the main entrance and its adjoining full height atrium. Creating this large open area is a series of 21m long beams, spaced at 6m centres and supporting roof lights.

Maximising space as well as making sure the gym would be accommodated within the main structure led to the decision to put it at first floor level as opposed to the ground floor, allowing the area below the hall to be occupied by workshops.

An economic design has been achieved as the sports hall’s 17m long beams only have to support the roof. If the facility had been located at ground floor level, a series of less economic transfer structures would have been required to support not only the roof but also a floor of workshops.

Befitting the centrepiece building of the Campus, it has a number of architectural features. Adorning the top of the building are three pods used as plant enclosures but initially designed purely as architectural highlights.

The pods are different sizes, but all elliptically shaped, with the biggest measuring 40m long and 9m high. Supported by the building’s roof steelwork, the pods are formed with a series of curved hollow section rings that will be clad with a copper mesh.

The building’s roof also overhangs the main elevation and this feature ends with a prow that covers the main thoroughfare into the entrance. A series of four 14.5m high V-shaped CHS columns support the overhang. A slightly larger 17m high V-shaped section stands guard in front of the entrance supporting the upturned prow.

Inverness College UHI is scheduled to open in September 2015. 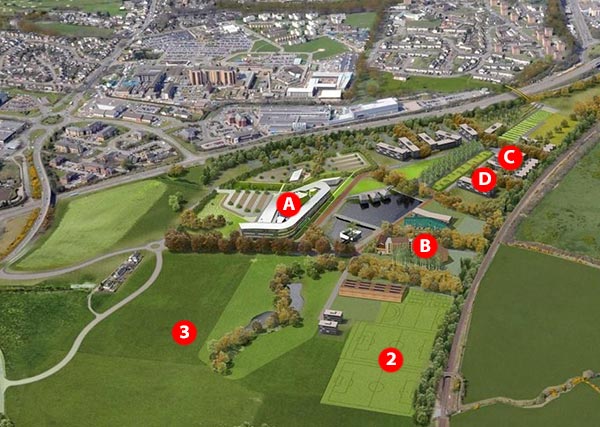 The scheme is being developed on a 215 acre site just off the A9 dual carriageway on the outskirts of the city. It is located adjacent to the Raigmore Hospital (the region’s largest NHS infirmary) and Lifescan Scotland, a manufacturer of scanners and currently the biggest employer in Inverness.

The vision is for the Campus and its neighbours to forge an alliance and form a key research and education environment.

As well as the College (A) , phase one of the Campus project includes a four-star hotel (B), student accommodation blocks (C), offices and research space (D). Designs are currently being finalised and the likelihood is that steel will play a role in most of these schemes when they get started later this year.

Two further phases are planned: phase two (2) will include leisure and sport facilities, and more office blocks, while phase three (3) will be residential.

Throughout the scheme, positive measures will be taken to be sympathetic towards the natural environment. “The Campus will have parkland, recreational space for people working and studying on-site as well as for the wider local community,” says Ian Thorburn of the Highlands and Islands Enterprise. “Public art features will further develop the high quality landscape for all to enjoy.”

Bridge to the Campus 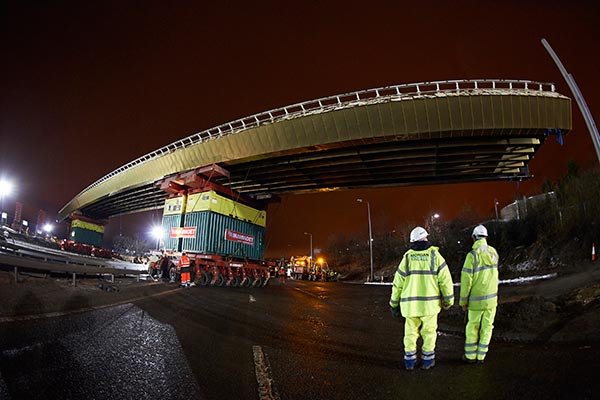 Linking the Campus with Inverness city centre is an 84m long single span steel pedestrian and cycle bridge that crosses the A9.

This important link was fabricated and assembled by Cleveland Bridge. It is 9m wide, weighs 290t and was brought to site as six main girders, two measuring 36m long and four 24m sections.

“We assembled the bridge on 2m high stillages on an adjacent site,” says Paul Walmsley, Cleveland Bridge Project Manager. “We welded the girders and crossbeams, as well as installed the metal deck.”

Once the bridge was assembled and clad, Morgan Sindall (the main contractor for the Campus infrastructure works) and heavy lift specialist Mammoet, installed the bridge during a weekend road closure. The bridge structure was jacked up and transported from its assembly yard to its permanent position by self propelled mobile transporters, and then lowered onto its permanent bearings.

The bridge will be officially opened this April.