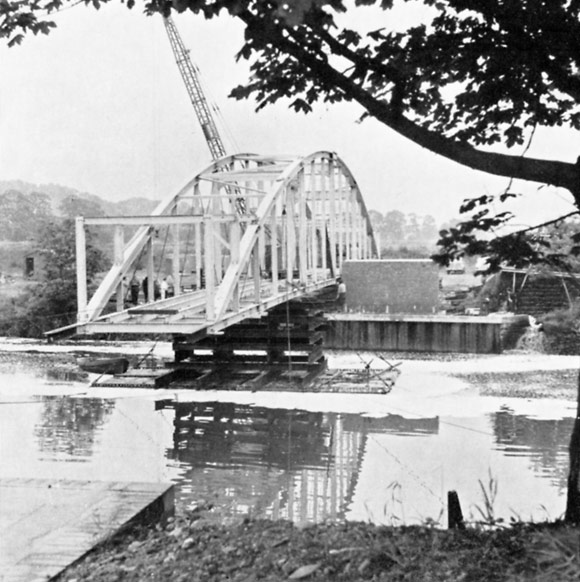 New Bridge over the River Calder in Huddersfield

1. New Bridge over the River Calder in Huddersfield

The £3 million scheme for the extension and modernisation of the Corporation of Huddersfield’s sewage purification system includes the provision of a bridge over the River Calder. The bridge unites the two halves of the plant, and carries a glass fibre aquequct for the conveyance of sewage with various pipes and mains, and a light walkway for foot traffic. It is a two-pinned tied arch with a 171-ft span and a rise of 20 ft. The main booms are constructed from Universal columns in high yield steel and the splices in these, and the portal cross frames also, are made with high strength friction grip bolts. High yield stress steel was used in order to keep down the dead weight of the bridge, which is an appreciable part of the load to be carried.

The bridge was erected on land over a short length of temporary railway track and then winched forweard until one end projected well beyond a pontoon stationed in the river. Trestling and beams were then inserted to transfer the weight of the bridge to the pontoon and the 45-ton bridge (and pontoon) winched forward across the river until the projecting end rested on the bearings on the bank. 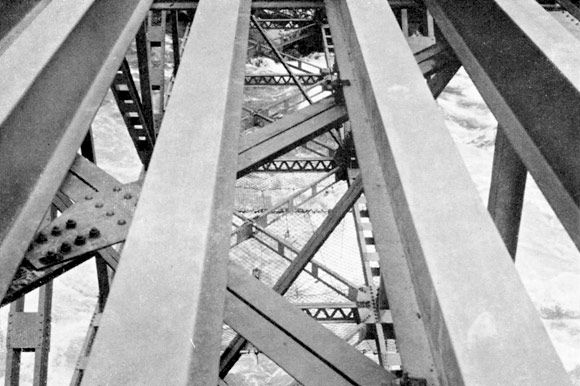 Severe climactic and geographical conditions can significantly influence programme planning in North America. The building of a bridge over the fast-flowing Hamilton river in Labrador, a short distance upstream from the 300-ft Grand Falls illustrates this. Although the bridge is relatively small, involving only 625 tons of steelwork, it is designed to carry extra heavy loads such as 150 ton transformers for a future power station.

The contract called for erection to be completed within 41/2 months in order to take advantage of frozen ground conditions when transporting steelwork and supplies. Labrador has only two seasons and the change from winter to summer occurs very abruptly around the middle of June.

In order to meet the deadline, which was done with nine days to spare, split-second timing of every successive stage from odering the steel to delivery on site was essential. The control measures employed were so accurate that the contractors knew the exact location of every piece of steel at any time. The actual erection time was only five weeks.