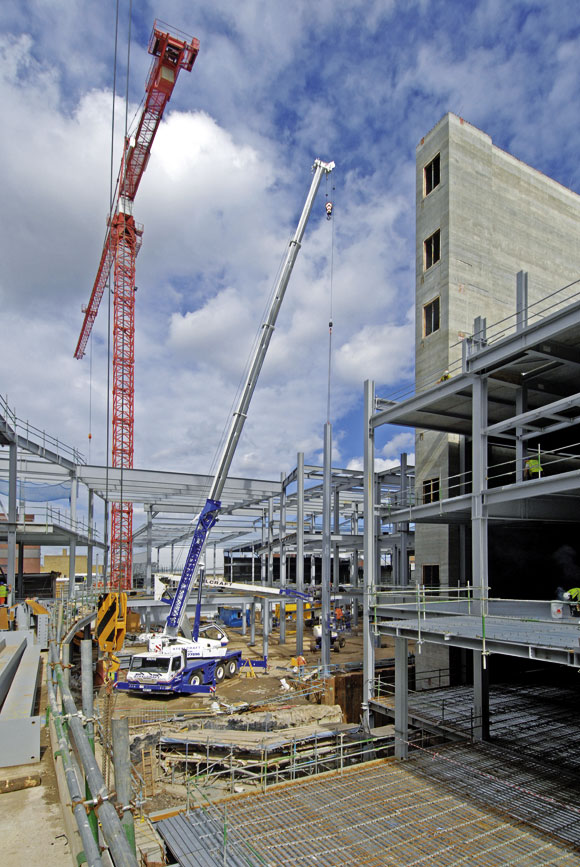 Mobile cranes erected steel up to the fourth level

A 1970s complex is being expanded with a new steel framed extension to create one of the East Midlands’ largest shopping centres. Martin Cooper takes a stroll through Westfield, Derby.

More than 11,500t of steel will be erected by Rowen Structures for Derby’s new Westfield Shopping Centre, one of the largest projects it has ever been involved with.

Working on behalf of the main contractor – Australia’s Westfield Shoppingtowns – Rowen has been on-site since January 2005, and erecting this not insubstantial amount in earnest since the Summer of 2005.

Steve Dobbs, Rowen’s Contracts Director, says the majority of steelwork will be completed by the end of the year, but what has made this project interesting is the volume of steel.

“Originally the contract required about 8,500t of steelwork,” he says. “Then once construction got underway the plans changed with the addition of a cinema complex giving us the present 11,500t total.”

The project entails not only the construction of new retail and leisure space but also the refurbishment of the existing shopping centre. Once complete the site will provide over 1M/ft² of new and upgraded retail and leisure spaces, which will include more than 100 shops and two large anchor department stores, a 12-screen cinema, an 800-seat food court and 3,700 car parking spaces.

The new shopping centre, which has a floorplan of 60,000m², wraps around and over the old structure. The original early 1970s shopping centre is a concrete building. However, according to Scott Crawford, Structural Engineer for MPN, the decision was taken early in the planning process to build the new development with steel.

“The site is confined by two busy roads and the existing shopping centre,” Mr Crawford says. “So bringing plant equipment and materials on to site was always going to be difficult and was one of the project’s most challenging aspects.”

The geometry of the new structure is consequently dictated by the curved layout of the roads which bound the site, and the need to link three new internal malls with the existing centre.

“It was decided to use steel for the new build because the material lends itself to off-site fabrication, which is an important issue on a site with little room to stockpile,” Mr Crawford says.

“A concrete structure would have meant far more city centre disruption and more plant equipment on a very tight site,” he adds. 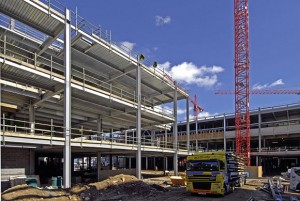 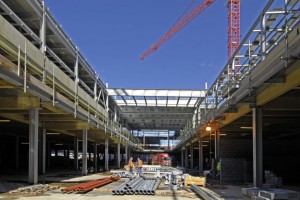 Long span beams were erected over the new malls 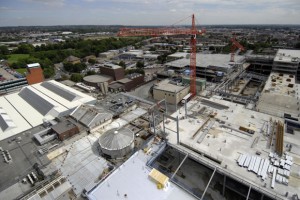 The new centre is fully integrated into the existing structure 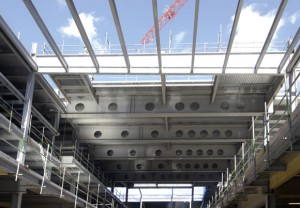 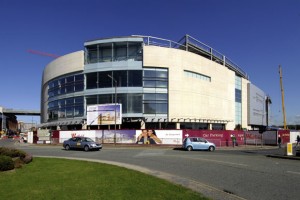 One of the two anchor stores, Marks & Spencer 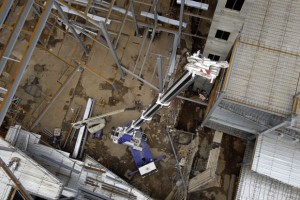 Access to the site has been a major challenge

However, delivering more than 11,500t of steel to a city construction site also presented some challenges to Rowen Structures. “Most of the steel members were delivered to site in complete sections and erected almost immediately,” Mr Dobbs explains. “This helped with the construction process and limited having to stockpile materials.”

Once work got started the initial phase included refurbishing and extending the existing Victoria Chambers, a four-storey Victorian office/retail building on a site opposite the main Westfield site, to provide accommodation for three relocated existing tenants. This involved demolishing most of the existing masonry load-bearing walls on the ground floor to provide an open plan, which required a new steel frame to be inserted into the building to hold up the upper floors.

Once this phase was complete, the demolition of some of the old existing shopping centre and two 1970s office blocks could commence to clear the site for the new development. The cleared area was then excavated down to a depth of 7m and a steel sheet pile retaining wall built around the new basement level.

The floor of the basement is concrete, but the con-struction from here on up is entirely steel, except for the concrete used to form the composite floor slabs.

The basement area will be a delivery and loading area, while above this there will be three levels of retail and five levels of car parking. Meanwhile, sitting on top of the existing shopping centre there will be a two-storey cinema block.

“The vast majority of the steel erection is typical stick and beam,” Mr Dobbs says. “There just happens to be a lot of it and getting it on to site was the challenge.”

When the project began, Rowen was able to use three access points for steel deliveries, but as the job progressed only one entry point remained open.

“Normally you’d construct a building from one end to the other, but on this project we’ve had to work around the existing building,” Mr Dobbs says. “This meant we lost two access points when the new building went up. And then the cinema complex was added, which slightly complicated our erection procedure.”

Columns for the entire shopping centre and car park vary from 254s, 305s and 356s, while beams are typically 254s up to 1056s. Larger grids have been erected inside the Centre’s two main anchor stores, which are double-level retail units and required large open-plan areas. “Steel lends itself to these large open areas,” Mr Dobbs says.

Above the basement level a large number of plate girders were required to provide a clear span over the loading bays and truck maneuvering areas, and again at level 4 where the multi-storey car park spanned across the east-west mall, which was required by the architects to be column free. Rowen erected nearly 2,000t of these plate girders to act as transfer beams.

“Holding up the basement roof are some of the project’s biggest steel members,” Mr Dobbs explains. These girders are 30m-long and weigh close to 40t, and were brought to site in one piece from Rowen’s fabrication yard 20 miles away in Nottinghamshire.

These weren’t the only large girders utilised on-site. There are a total of 11 steel access bridges connecting the car park’s different levels, and these each required two 25m-long girders which were erected 7.5m apart and then in-filled with steel crossbeams and a concrete slab.

Vehicular access from the street to the multi-storey car park lower level – which is the Centre’s fourth storey – is provided by two means. One is a steel-framed helical express ramp off London Road that had a complex geometry requiring beams to be curved in two directions.

“Once we’d produced the first set of members the whole ramp just repeats itself along its entire length,” Mr Dobbs says.

The second access is via a new steel box girder bridge erected across London Road. For aesthetic reasons a central spine trapezoidal steel box girder was selected with tapered steel crossbeams cantilevering off on each side and supporting a stainless steel balustrade as well as the deck. “This was all assembled into one piece on the ground and erected in one continuous overnight operation as this was the only time the road was allowed to be closed by Derby City Council,” Mr Crawford says.

Logistically, working around an existing shopping centre which has remained open throughout the construction process has also presented many challenges. Westfield says it is currently renovating the existing centre to ensure the same high standard of design and materials run continuously throughout the malls, creating the impression of one major new shopping centre.

However, above the existing ground floor shop units, which had to be kept trading throughout, Westfield is constructing a new foodcourt. “The new frame had to be extremely lightweight in order not to overload the existing concrete columns and foundations within the stores, which could not be accessed for strengthening. In addition, large spans were required by the architect, with few columns to create as flexible space as possible. So steel was the obvious solution,” Mr Crawford says.

Four malls connect the new shopping centre’s retail outlets in a rectangular grid pattern. Two run north to south, with a third new mall at the eastern end and the fourth sitting above the old structure’s existing mall at the western end, which is currently being refurbished.

The new malls will have fully glazed roof lights. Constructing their roofs entailed erecting a complex grid pattern to provide support for the curved ceilings and bulkheads above the shop fronts. “More than 800 individual steel members were installed for each of the mall’s roofs,” Mr Dobbs explains. “There is only 100t of steel in each roof, but a lot of erecting was needed.”

Being part of the large Severfield-Rowen group has obviously helped Rowen Structures do such a large project, with some of the steelwork being fabricated by Sevefield-Reeve and Atlas Ward Structures. Meanwhile, the steel erection was predominantly carried out by Steelcraft – another member of the Severfield group.

“We used Steelcraft’s mobile cranes up to the project’s fourth level,” Mr Dobbs says. “These units couldn’t get the required radius from there on up, so we then utilised Westfield’s five tower cranes for steel erection of the upper floors.”

The new and enlarged Westfield Shopping Centre is due to open for business by the end of 2007, meaning Derby will be at the forefront of retailing in the East Midlands just in time for Xmas.