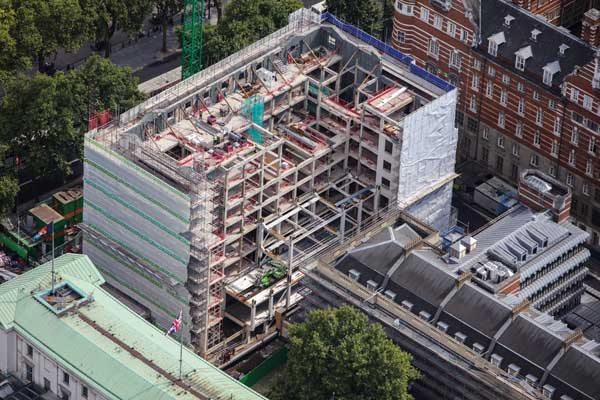 Structural steelwork has topped out on the redevelopment of the former Metropolitan Police headquarters at Curtis Green Building on London’s Victoria Embankment.

The Metropolitan Police will vacate its current New Scotland Yard premises once its former headquarters has been renovated. This work has required Bourne Steel to fabricate and erect 620t of steelwork.

The majority of the steel will form new floors, while the remainder has been used to refurbish the existing 1930s steel frame.

Working on a constrained site with complex logistics was challenging and demanding, as was the welding of new steelwork to the existing steel.

Metallurgy studies were undertaken on samples of steel removed from the existing steel, which revealed high levels of impurities such as carbon and sulphur making it brittle.

A robust welding procedure was developed and onsite works were completed without a single failure.

A complex load transfer or jacking process was also employed during the erection process to ensure the new steel floors did not overload the existing steelwork frame.

Main contractor for the project is BAM Construction.