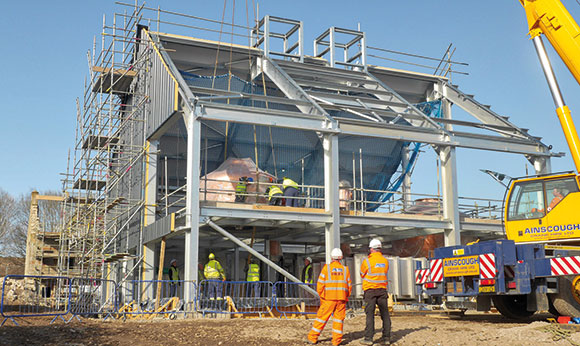 Copper tanks are lowered into position through holes in the steelwork

Steel construction is playing a leading role in the building of a new distillery in The Highlands.

Set in the picturesque Averon Valley, some 30 miles north of Inverness, a new distillery is being built within the grounds of the abandoned and rundown 19th Century Ardross Mains farmstead.

The project’s client, Ardross Investments, purchased the site, which consists of 50 acres of private land with its own loch, in order to build a modern, state-of-the-art distillery that will produce a number of different spirits.

To this end a steel-framed design that incorporates some retained and salvaged elements from the original buildings has been adopted as the most efficient construction method.

The majority of this main building is a steel-framed structure, albeit with two original stone walls incorporated into the design and the area housing the main entrance and lobby which is timber-framed.

The walls at the rear of the main building have been removed and rebuilt with a steel frame to increase the size of the new two-storey facility. 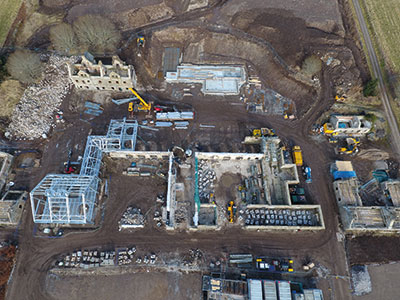 The distillery sits within a large rundown farmstead

Adding to the overall aesthetics of the scheme and helping to preserve the character of the project, stone and slate from the farm’s collapsed buildings will be reused to roof some of the distillery structures.

“As well as retaining and reusing as much of the on-site materials as possible, the building’s steelwork, which has all been galvanized against corrosion, will be left exposed within the completed structure, adding to the high-spec interior requested by the client,” says Morrison Construction Contract Manager Gordon Williamson.

Steelwork contractor for the project is locally-based Mackay Steelwork & Cladding and it has erected 200t of structural steel for the main building and an adjacent boiler house. Also within the company’s remit is the supply and installation of metalwork, predominantly consisting of grating to form the distillery’s first floor, as well as stairs, hand railings, composite roof and wall cladding.

A steel-framed solution was chosen for its ease and speed of construction, as well as its ability to provide the column-free areas for the main building’s two floors. The steel columns are also carrying a considerable weight as the cladding will be topped with slate, and so the members are slightly larger sections than would ordinarily be used on a structure of this size.

Forming the roof of the steel-framed part of the distillery building are a dozen 10.5m-long × 3m-deep trusses, which were brought to site as complete fully-welded sections in order to avoid unnecessary on-site work.

“The biggest challenge has been trying to co-ordinate all of our activities in a tight site, where most of the time we could only operate one mobile crane,” adds Mr Mackay. 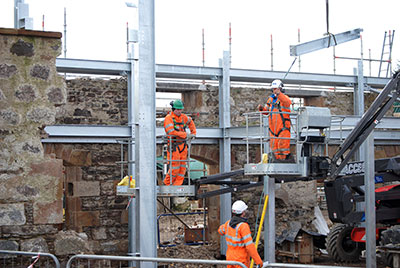 As well as the main distillery building, Mackay has also erected a pipe bridge that connects water tanks (known as the tank farm) with the distilling process within the mash house area, and a small steel-framed boiler house to the rear of the site.

Other buildings on the site are being renovated to form ancillary structures for the distillery. Two detached stone one-and-a-half storey cottages to each side of the main building will become offices and staff accommodation. An old dairy building behind the staff quarters will become a blending and product development laboratory, while a three-storey house will be converted into a vaulted cask storage area.

The Ardross Distillery is expected to produce its first spirits by the end of the year.

Summing up, the Highland Council says that through the use of appropriate materials, with new sections of the building being sensitively sited and designed when viewed alongside the existing buildings, the project will safeguard the long-term future of the dilapidated historic buildings.

In a report it concluded: “It is encouraging to see the future of the listed buildings protected and secured through a high-quality design, which respects the setting of the steading and the nearby Category A listed Ardross Castle.”