In spite of its enormous physical presence throughout today’s world, steel as a material may seem invisible because it is normally “disguised” as a building, bridge or some other useful structure or product. The function and form of steel construction products are seen easily enough but not always the steel itself, the very stuff of which these products are made. Gregory L. Crawford reports.

While architects, engineers, specifiers, contractors, and owners know about steel and its functional characteristics, too few have seen the “green” side of steel. Without proper introduction to its environmental benefits, they might even avoid its company.

Supporting steel on the worldwide stage of construction is its inseparable companion, steel recycling, which should be a well-known, green identity. What is the most recycled material in the world? It’s steel, preponderantly in construction products. The Steel Recycling Institute in the USA estimates a 95% recycling rate for structural beams and plates. And, similarly, the Steel Construction Institute in the UK estimates a recovery rate for recycling of 84% from demolition sites. Everyone knows these statistics, don’t they? Well, not exactly – in fact, hardly at all! People are looking the other way or simply not around when steel is recycled, although the sheer tonnage and percentage recovered are astounding.

Shortfall in recognition is serious since steel recycling is the foundation for steel’s green marketing claims. Indeed, the green contributions of steel and steel recycling are largely untold or poorly understood, as they circle the world comprehensively, but in relative anonymity. What can be done to expose their respectable environmental identities? They cannot be left cloaked in their images of the past: smokestacks and junkyards. We must know the facts and capture the imagination by telling the green story well.

Most people would not have an interest in steel unless a connection is made to their interests. At one level, the connection is professional, such as architects, engineers, specifiers, contractors, and owners. The other level is personal. Although opinion polls may offer conflicting observations, most people profess an interest in an abundant future for their children and grandchildren, if not for themselves.

The path to that future is paved with decisions and actions that support the practice of sustainability. This concept has been described as a three-legged stool that must have all three legs to function properly: society, economics, and environment. Steel and steel recycling serve sustainability for our planet bountifully. Let’s view their contribution to society, economics, and environment – and think about how to introduce them to others better.

Steel is the glue that holds modern society together with commercial and residential buildings, transportation, infrastructure, and innumerable consumer goods for living, working, playing. With low cost and high functionality, steel provides “affordability” for more people, thus a greater common good. Modern society would not be modern without steel. Yet, the contribution of steel construction products to better living standards is largely unheralded. Steel recycling contributes as well by reducing waste, saving energy and other natural resources, and creating new, useful goods. These benefits, which help sustain society, should be introduced to all levels of business and government, indeed down to each private citizen.

Steel generates enormous economic value through its manufacturing and distribution channels, from the steel mill through its treating, shaping, processing, and fabricating, until finally installed and in service at the construction site. Then at the end of steel’s long, useful service life, steel recycling brings even more value through steel’s deconstruction, reverse distribution, and reclamation channels, as demolition material is deconstructed and ultimately recycled into the mix of new steel.

The third leg of sustainability’s three-legged stool is environmental. For this, steel and steel recycling are measured relative to competing materials. This arena is fraught with green marketing claims and counter-claims. Therefore, one should be well acquainted with environmental facts and introduce them whenever material selection decisions are being made. Among numerous environmental regulatory and sustainability issues, steel and steel recycling must surrender their incognito roles for respectable acclaim at center-stage.

Objectively, or seemingly so, steel and competing materials are measured and compared through use of methodologies that have evolved over recent decades. This began with life cycle inventory (LCI), which catalogs manufacturing system “inputs”, such as energy and natural resources, and, “outputs”, such as products, wastes, and pollution. The Steel and Steel Recycling: Circling the World Incognito Gregory L. Crawford FEATURE In spite of its enormous physical presence throughout today’s world, steel as a material may seem invisible because it is normally “disguised” as a building, bridge or some other useful structure or product. The function and form of steel construction products are seen easily enough but not always the steel itself, the very stuff of which these products are made. system boundaries, ostensibly neutral and objective, as chosen by the developer or practitioner, can have a very significant effect on outcomes and subsequent comparisons among materials. 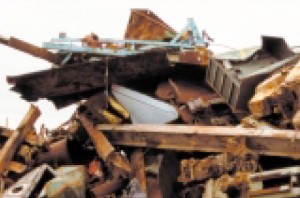 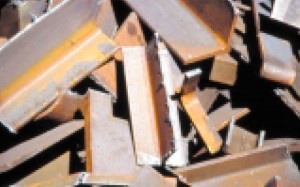 Subsequent is life-cycle assessment (LCA), which uses LCI data and various performance measurements of a building or other system to compare materials and designs in service. The selected parameters, depending upon their pertinence and possibly one’s perspective, may have little, some, or much actual value to the environment. These parameters may include energy use, thermal conductivity, thermal mass, recycled content, recyclability, embodied energy, renewability, and durability. Two North American LCA systems, BEES and ATHENA, each has its own proprietary LCA methodology and supporting LCI database. Both use antiquated steel LCI data (open hearth technology), greatly overstating energy and resource consumption, as well as waste and pollution generation.

A third, newer methodology, is life-cycle impact assessment (LCIA). Its supporting LCI database includes measurement of selected human activities within the physical environment itself, that is, habitat, by observing flora and fauna. Its LCA component assesses the impact of these human activities together with other building or system performance parameters.

An example is the Life-Cycle Stressor-Effects Assessment (LCSEA) methodology developed by Scientific Certification Systems, Oakland, California, USA. In 2000, an LCSEA study by SCS compared the environmental performance of a timber-framed family home with a light-gauge steel framing system. The study reported, for framing the same number of homes, the permanent eco-disruption of natural habitat from wood production (allowing long turns between harvests and no clear-cutting) was more than one hundred times greater than the eco-disruption from steel stud production, including mining, steelmaking, galvanizing, and forming. The final phase of the study required the co-operation of the wood industry, which was not forthcoming. It was to compare the side-by-side energy performance of woodframed to steel-framed homes.

LCI, LCA, and LCIA need to treat steel and steel recycling objectively so contributions to environment are duly and accurately recognized, relative to competing materials. This does not happen automatically. It comes from the steel industry interaction with the developers and users of methodologies. As an example, the Green Marketing Task Force of the American Iron and Steel Institute has initiated dialog with the developers of BEES and ATHENA. Modern technology inputs and outputs, such as basic oxygen furnace, electric arc furnace, and continuous casting must replace archaic data. In addition, the significant energy savings realized through recycling steel must be credited routinely at end of life to amortize the initial embodied energy of steel over future generations. Other serious issues remain for steel, like improperly penalizing its thermal conductivity in building envelope energy performance.

Alternative systems exist for green building measurement that are cheaper, quicker, and, arguably, more effective. They award points for approved or recommended materials, designs, and technologies. As such, the US Green Building Council (USGBC) certifies commercial buildings with its Leadership in Energy and Environmental Design (LEED)™ program. It now has about 20 international chapters. The Sustainable Buildings Industry Council, also in the USA, offers its Green Building Guidelines and other publications and tools for improving building performance. Green Building Alliances in selected cities in the USA, informally affiliated with the National Association of Home Builders, provide green building rating programs for local builders. Steel representatives must be vigilant as well with such rating system developers. For instance, it was recently recommended by a wood industry representative that USGBC eliminate points for steel recycled content in the LEED program.

Indeed, since environmental measurement systems actively educate and influence architects, engineers, designers, contractors, and owners on material selection, it is imperative that steel and steel recycling advocates make their presence felt. Participation is needed at local, national, and international levels so steel and steel recycling are recognized as strong supporters of sustainability. Steel industry trade associations, member companies, manufacturers, fabricators, installers, and erectors of steel construction products will do well to know the facts about steel and steel recycling and help to vigorously relate their green story worldwide.

Fortunately, excellent work toward this effort has already been in process through the International Iron and Steel Institute www.worldsteel.org and the Steel Construction Institute www.steel-sci.org. Detailed proceedings for the IISI World Conference 2002: Steel in Sustainable Construction in Luxembourg, and the 1998 Sustainable Steel Conference in Orlando, Florida, USA can be found at www.sustainablesteel.org, together with other pertinent links. As such stalwart efforts grow, steel and steel recycling stand to become better known and well respected for their solid contributions to sustainability.