Richard McCarthy, Chief Executive of the Peabody Trust, presented the awards at the Savoy Hotel, London, on Tuesday 24 June, 2003. There were three Awards, four Commendations and one Certificate of Merit.

The Structural Steel Design Awards were introduced in 1969 and co-sponsored by Corus Group plc, The British Constructional Steelwork Association and The Steel Construction Institute. They “recognise the high standards of structural and architectural design attainable in the use of steel and its potential in terms of efficiency, cost effectiveness, aesthetics and innovation.” All entries must use steel predominantly sourced from Corus and be fabricated by a UK company or joint venture.

Peter Head OBE, Chairman of the Steel Construction Institute, welcomed the winners and the guests. His speech included: “You have seen the winners – so we have a lot to celebrate. I was talking to Mike King of Arups earlier and he said that he usually visited buildings when they were being constructed – not when they were in use, but recently he had been to Manchester Stadium when it had 40,000 people in it, and it was a revelation. That is our theme – we need to get a better connection between what we do and society in general.

The industry has been very successful in reducing costs etc, but we need to capture some of those benefits in our own businesses. So the SCI is running seminars to try to do this – to create value from our work.

All the projects that we see today show this. We hear a lot about sustainable development. At Rio ten years ago this was the theme. Now after Johannesburg the social aspects are as strong. We need to tailor our skills to meet the needs of people more directly.

Richard McCarthy has spent the majority of his life in this area, particularly in social housing, which is an area that is deteriorating in London.

His speech included: “I have some good news for you – I like steel. But the Peabody Trust also likes steel. We are probably the best-known housing association in the country, having been founded by George Peabody in 1862. He was concerned about the living conditions of the working poor – so he gave half a million pounds – which was a lot of money at that time – to start doing something about it. 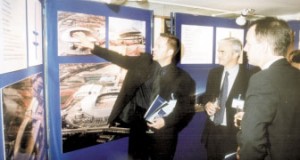 We now have a large portfolio of properties and have extended it massively. We create and support communities. Peabody is at the cutting edge of building modular housing. The construction industry has lagged severely behind on this.

We built Murray Grove in Hackney in 1999 for key workers. This year we will complete our project at Raines Dairy. Both were constructed by Yorkon in steel-based modular factorymade construction. Raines Dairy is larger than Murray Grove and the units include the balconies. Raines Dairy is shared ownership, and we are now getting offers of mortgages. That shows one of the problems – a very conservative financial situation, where it can be hard to get funding. We are also completing a development in Lillie Road, where we have used bathroom and hallway pods and slotted them into a steel frame. There were problems with the frame being site assembled and not being as accurate as the factory-made pods. We are also working on a new building for Spaceover in a scheme for key workers.

Not only does Peabody like steel, the government likes steel. It wants to build 200,000 more homes in the south-east. That is a massive opportunity. With 7,000 people in B&Bs there is a tremendous shortage of accommodation, but we have a failing construction industry. You can help government to do this – and why not make a profit as well?

In the future one quarter of our housing is to be of non-traditional construction. We need to improve the attention we give to this opportunity or the government will lose interest, and the money will go away.

The problems for key workers are significant. As a society it is vital that we build more homes, better, quicker and more densely. We need house builders to change – that’s difficult. We need to raise the quality. We need government to say “here is land, build on it.” There is a great use of steel shown in the awards – but people are afraid of it when it comes to housing. Government needs to kickstart this with some help or venture capital – and we need really high standards of design. It is about three things: economical, social, and environmental.

We need to improve methods of manufacture. We need to use just one manufacturer on each project – the more we mix techniques and suppliers the more problems we have. That is the challenge for you: you can develop the product, which is the way of the future. You are not the victims. You are the future. If you want to get rich, quit and become a plasterer (they are very well paid) but if you want to build a better Britain develop better products. To coin a phrase: “The future is bright: the future is steel.”

Peter Samworth thanked Richard McCarthy for his stimulating speech. He mentioned two things: the Awards, and Health & Safety. First, he quoted the Objectives of the Awards (see above) and said: “There is no doubt that the designs today have met these objectives. Good design must both inspire and function well. For instance the Manchester Stadium is inspiring the whole of Manchester, and the Hampden Gurney school is inspiring the children who attend it.

And on Health & Safety: the BCSA has concentrated on supplying help to member companies. The Safe Site Handover Certificate is now accepted by most contractors. The BCSA has also drafted a family of safe erection documents. The first is a method statement, others are on single-storey buildings, multistorey buildings, and on decking.

The Awards were presented by Richard McCarthy and the proceedings were closed by Andrew Page of Corus Construction and Industrial.