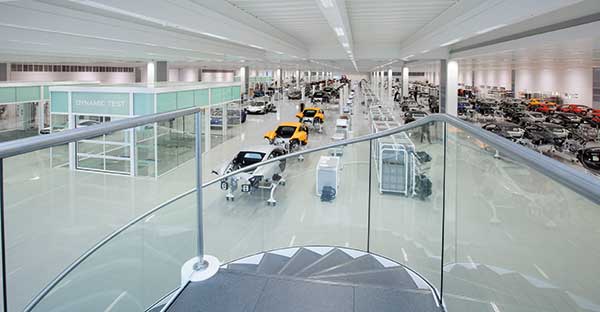 An automotive production building for McLaren had to be constructed within an extremely tight programme while adhering to some very stringent planning restrictions.

Located on a greenbelt site near Woking, a new production facility for the manufacture of the McLaren MP4-12C super sports car was completed in a tight 54 week programme.

Because of the location, tight planning restrictions on building height had to be adhered to, and this meant the two storey structure had to be sunk into the landscape. This sensitive design, which hides the facility from nearby public thoroughfares, was chosen as it integrates with the landscape and minimises its visual impact.

Early works involved the excavation of some 180,000m³ of soil (equivalent to nearly 70 Olympic sized swimming pools), all of which was retained and later reused to landscape the site.

The buried portion of the facility is concrete while all of the above ground elements are steel framed, with more than 1,900t of structural steelwork fabricated, supplied and erected by Atlas Ward. 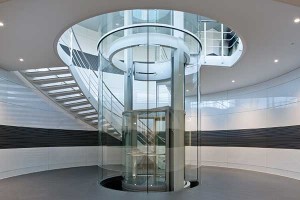 The steelwork was designed using double primary beams and columns, which allowed all of the services to be hidden within the frame.

“By accommodating all of the building’s services within this void we not only created a clean aesthetic space but we also built in flexibility,” says Iwan Jones, Foster + Partners Project Architect.

One of the key aspects in the project’s design is the simplicity and repetition. A cross grid of 18m, 21m, 21m and 18m was chosen in order to optimise the working aisle widths. These were then repeated on an 18m grid for 12 bays along the length of the building.

Primary, secondary and tertiary beams were then optimised for these spans and repeated throughout the building. The detailing of the key interfaces was carefully considered and a prototype of a typical bay was fabricated and installed. After approval of the prototype, fabrication commenced and the steel was erected on site as the lower concrete areas progressed simultaneously.

Although the bulk of the internal steel is standardised, the structure’s perimeter steel elements and its entrance drums have been designed to match the appearance of the nearby McLaren Technology Centre. Detailed spiral stairs and viewing galleries have been added to enhance the visitor experience.

“The building’s exposed beams didn’t require fire protection and consequently they have a glossy painted finish creating the desired appearance,” adds Mr Jones. “This also creates continuity with the nearby McLaren Technology Centre, which has a similar family of details.”

Quite a few sustainability features were also incorporated into the project’s design in order to meet the stringent planning requirements. Most notably, the flexibility of the steel frame will allow for future modifications, while the material contains a high proportion of recycled content and could be recycled again.

Summing up, the judges say this shows what can be achieved if sufficient care is taken over all aspects of a project.