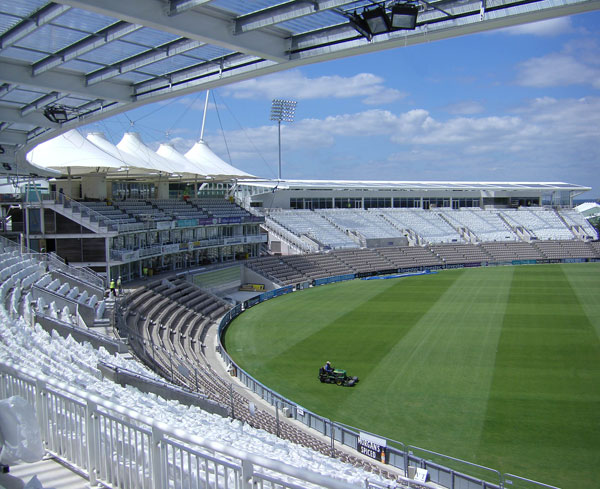 Flanking an existing landmark pavilion, two new stands at the Rose Bowl cricket ground have been designed to be sympathetic to their location as well as economic and low maintenance.

Hampshire’s Rose Bowl cricket ground has been upgraded and enlarged with the addition of two new stands, positioned either side of the site’s landmark pavilion.

Central to the ground’s ambitious future plans, the stands, in addition to the seating, also provide covered concourse areas, catering outlets, retail areas, press facilities, hospitality boxes, all housed in a two-storey structure situated behind and below the seating.

One of the overriding conceptual requirements for the project was to ensure the new development fitted into the ground’s environment and provided a unifying structure, facade and roof.

From this client requirement, what has been called a ‘sickle’ structure design was born, whereby the roofs are separated from the permanent seating along the back of house area by a large timber louvered facade. This feature is said to marry into the surrounding landscape and the facade is supported by one large independent steel column.

The ‘sickle’ rafter, on each of the two stands, curves around the back of the main two-storey structure as an independent column and ultimately slopes back into the building forming the roof and cantilever.

The ‘sickle’ columns were fabricated in three sections, a straight outward leaning vertical leg which was bolted to a curved quadrant section, which in turn was bolted to a straight downward raking member which formed the roofs drainage fall and cantilevers over 70% of the terraced seating area,” explains Colin Davies, Rowecord Engineering  Contracts Manager.

The column was formed from a standard section with the curved portion fabricated from plates.

Structurally one of the main challenges associated with the project was providing sufficient stability to the structure, while at the same time adhering to the architectural requirements. Where to put bracing was the main problem, as the two-storey element provided little opportunity for vertical bracing and the stand’s roofs were already braced along their full lengths to ensure effective transfer of lateral loads.

After much deliberation the solution chosen was for the sickle columns to be discretely connected at each floor level – including the roof – to the accommodation block. A radial prop between the columns on each line is attached to the sickle columns, while at two locations along the length of each stand diagonal members spring from the columns to third points on the adjacent floor edge beams.

Summing up, the judges say this project has clarity of structural steelwork and is a good example of ‘less is more’.