Posted on July 1, 2010 by NSC2 in Certificate of Merit, SSDA Awards 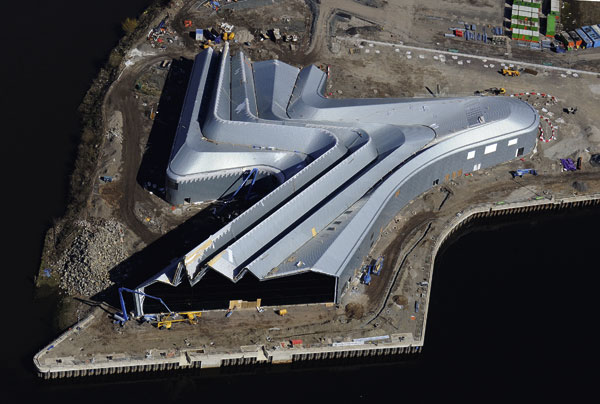 Steel’s flexibility and quality have been highlighted on a challenging design for Glasgow’s new iconic transport museum.

One of the most prestigious and eye-catching projects along the banks of the River Clyde is The Riverside Museum, a new iconic museum to showcase Glasgow’s transport heritage.

The museum is being built on a 1.2ha site at the confluence of the Clyde and Kelvin rivers, one of the few intact areas of historic quayside, and a fitting reminder of the city’s shipbuilding past.

Work on site started in 2007 and the design of the building was the brainchild of much-acclaimed architect Zaha Hadid. The building is a twisting and curving steel-framed structure on plan with two folds or transition zones (the points at which the building’s straight planes turn), while the roof is an innovative pleated concept with five peaks and valleys.

With two main façades, one facing the city and the other leading directly to the riverfront, the design creates a tunnel-like building which will create a historic transportation journey for visitors.

Large open column free spaces, up to 50m wide in places, have been achieved by forming the innovative roof with a series of inclined trusses, following the external geometry of the roof, which utilises folded plate action. The inclined planes are supported at the north and south facades on a series of structural mullions and within the building at the two transition zones. 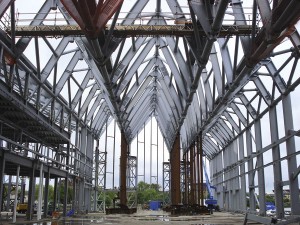 “The project’s geometry is unique,” explains Tim Kelly, Senior Engineer for Buro Happold. “The structure exploits the convex and concave geometry to form a locked structure which spans across the width of the exhibition space to the column lines which flank the building.”

Phase one of the steel erection consisted of a two-storey zone approximately halfway along the eastern elevation. This zone was chosen as the starting point as it would stand up without any propping. From here on adjacent phases were erected all supported with temporary props and trestles.

The props were predominantly CHS sections and connected to roof nodes via an 80mm diameter pin. “We designed the props so they could be re-used throughout the project,” explains Andrew Hart, Watson Steel Structures’ Contract Manager.

“As the erection front of each zone moved forward, it was progressively de-propped from the rear with the majority of the temporary members being used again in later zones.”

The steel pleated roof, featuring five differing peaks, of which the highest is 18m above ground level, is the most complex part of the project. Watsons designed a unique node connection (dubbed a can) which can accommodate the numerous incoming rafters, bracing and ridge valley members which form the roof.

As the roof pitches at various angles and also slopes from south to north, most nodes or cans are unique and can accept up to ten steel members. The biggest node is approximately 1m in diameter.

The judges say this unusual building, located on a prominent riverside site, is unmissable.