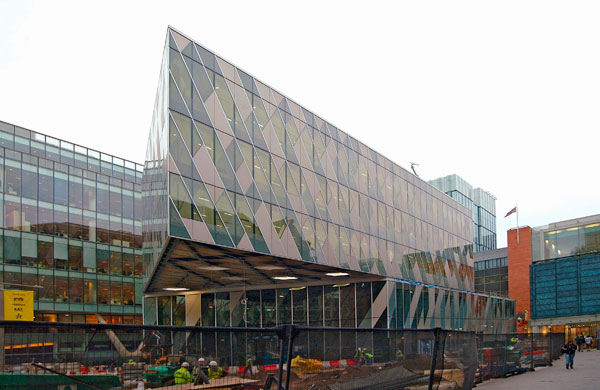 Providing high quality office, restaurant and retail space over six floors, the project is a landmark structure at the entrance to a city centre business development.

Local planning conditions stipulated that the Spinningfields development should maintain the existing views of the historic Grade I listed John Rylands Library and that it should also reinstate the processional route between Manchester Town Hall and the Crown Courts.

No 2 Spinningfields responds to these constraints by taking the form of two parallelograms on plan, oppositely positioned one above the other, creating a level two roof terrace to the west elevation and a 23m long cantilever to the east elevation. All of which has created what the judges describe as a building of obvious quality in many respects.

Another key planning constraint was a limit to the overall building height which meant a structural solution had to be found that kept the floor zones as small as possible.

The adaptability of the floor plate was another key client concern. The office floors have been designed so that they can be fitted out on either an open plan or cellular basis, and the servicing has been provided so that each floor can be sub-divided into two separate tenancies.

The floors also have built-in loading allowances for future storage capability and soft spots for tenant plant requirements. A high loading capacity for the retail floors was included to ensure flexibility for tenant fit out.

“The use of steel was the only way such a demanding structure could be delivered economically,” says Jon Smith, Capita Symonds Structures’ Associate Director. “The project’s cantilever was a significant driver in the scheme and couldn’t have been done in any other material.”

The floor construction comprises a 150mm thick concrete slab on composite metal decking on a grid of secondary and primary Fabsec beams. 400mm diameter openings in the 550mm deep beams allowed for integration of the services within the structural zone.

The 23m cantilever was resolved by making the perimeter steelwork into a three storey deep truss, achieving the most economical frame solution.

The structure was also engineered to suit the cladding deflection requirements, with a deflection matrix being developed to determine differential deflections of cladding modules and stiffening employed to ensure compatibility between the frame and the facade system.

“The project has successfully created the largest office cantilever in the UK, that we are aware of, forming a truly landmark building,” says Mr Smith.

The judges say this is a building of obvious quality in many respects.